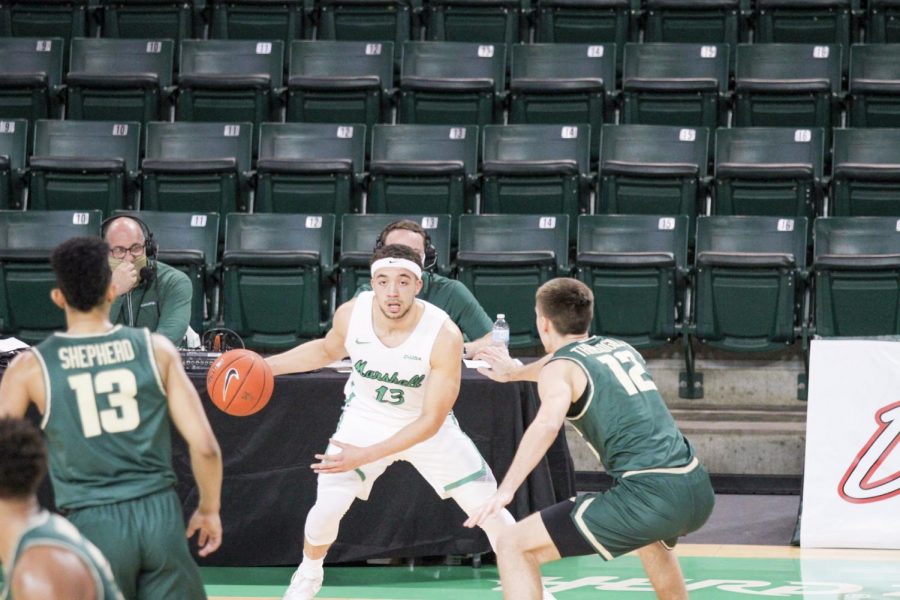 The same day West was also named to the all-defensive team as well the all-academic team on Friday. It was the second time West had made it onto both of those lists.

On the women’s all-academic team, senior guard Kristen Mayo was named Friday, making it the first Marshall women’s basketball player named to the all-academic team since Kendra King did it in 2007.

Mayo’s final season with the Herd ended after suffering an injury in the win against North Texas Saturday, Feb. 27. She was second on the team in scoring at 10.3 points per game while maintaining a 3.8 GPA in elementary education.

As the women’s basketball team heads to play in Frisco for the C-USA tournament without Mayo, Savannah Wheeler will have to take on a heavier burden. She leads Marshll in scoring with 17 points per game.

Her point per game total is sixth-best in the conference, and her free-throw percentage is second best.

On the men’s side, Kinsey leads the Herd in scoring at 20 points per game, a number that also places him as the second leading scorer in all of Conference USA. Kinsey’s 54.2% field-goal percentage is second only to Western Kentucky’s Charles Bassey.

On the second team, Jarrod West is joined by Malik Curry of Old Dominion, Tavin Lovan of UAB, Keaton Wallace of UTSA and Taveion Hollingsworth of WKU.

West made the third-team last season, averaging two more points than he is this season, 14.2 compared to 12.2. However, West’s game far extends from his point production. West leads C-USA in assists per game (6.0), assist-turnover ratio (2.8) and steals per game (2.5).

West, Kinsey and Wheeler will lead their teams on the court this week in C-USA tournament play.