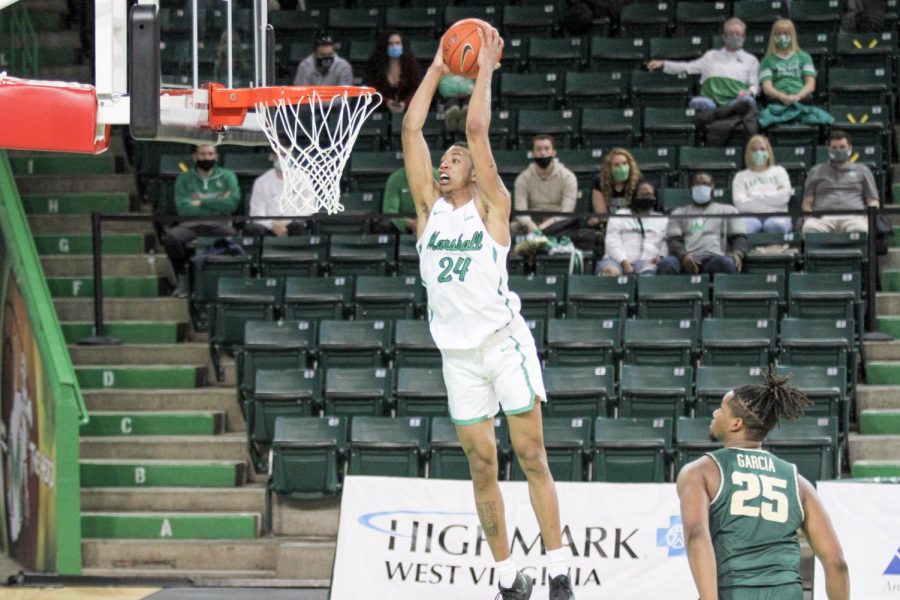 Junior guard Taevion Kinsey skies for a dunk during a 75-66 victory against Charlotte on Saturday, Mar. 6, the final game of the regular season.

The Marshall basketball team finished off the regular season on a strong note, as it swept the Charlotte 49ers in a two-game series at the Cam Henderson Center.

Junior guard Taevion Kinsey said the team is ready for its next challenge.

“It was a battle, I’m glad we won (the game) for our seniors,” Kinsey said. We won as a team and we are ready to go to Frisco.”

The Herd will enter the Conference USA tournament as the No. 3 seed in the east division. The Western Kentucky Hilltoppers fell to the Old Dominion Monarchs 71-69 in game one of their series, secure the No. 2 seed for the Monarchs.

Senior forward Jannson Williams said the team looks forward to going back to Frisco, Texas for the C-USA tournament, especially because it was suspended last season due to COVID-19.

“Last year we had a big chance to win the whole tournament,” Williams said. “We gotta bring that same energy to next week.”

Charlotte finishes the regular season as the fifth place team in the east and with an eight game losing streak.

The player who had the biggest impact in game one for Charlotte was sophomore forward Anzac Rissetto who finished game one a perfect 6-6 from the floor while putting up 14 points and three rebounds. He would end up not scoring a single point in game two.

Marshall would have three players finish with 15 or more points in game one leading them past Charlotte: Kinsey (19), Taylor (17) and Williams (15).

Game two was the day of the seniors, as some played their final regular season game at the Cam Henderson Center.

Williams said that even though that senior night felt different, he is proud of what the team accomplished today.

“I really wished that we could have had a packed house for (tonight), but we all know why we can’t have that,” Williams said. “I’m very blessed, very thankful and I think (the team) did a great job.”

Marshall is set to take on the winner of the Rice and Southern Miss game on Wednesday, March 10 at 7 p.m. Eastern Standard Time. The game will air on ESPN+.