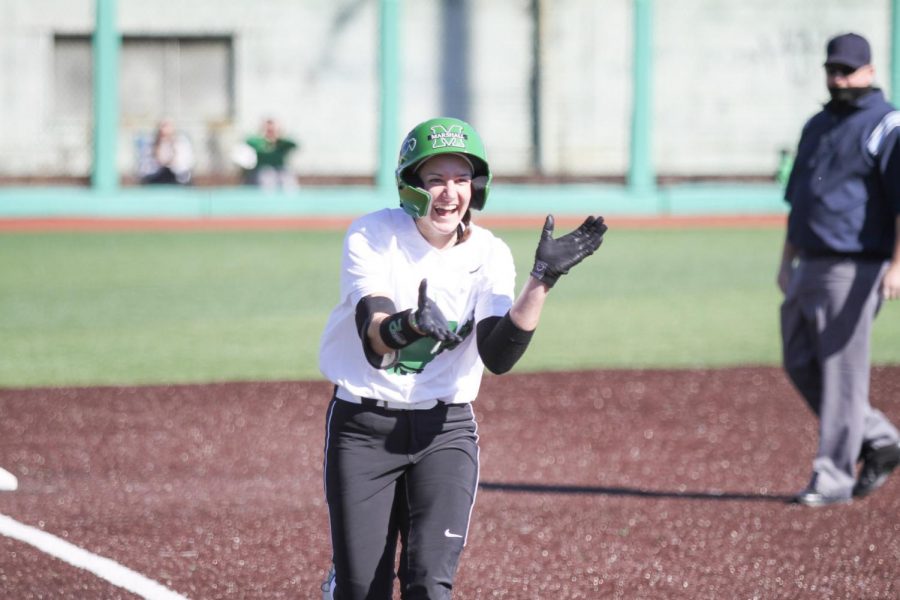 After a slow start in the season opener against Akron, the Marshall softball team’s bats woke up in the fourth inning of game one, leading to back-to-back victories.

Akron started off strong, scoring four runs in the first three innings of game one and putting Marshall in a 4-0 hole.

Head coach Megan Smith Lyon said that her team was pressing too much out of the gate after not playing in so long.

“We missed it so much,” Smith Lyon said. “I think the want to be out there kind of overwhelmed them a little bit. Once they calmed down and got over that, we were back to our normal selves.”

That lead would not subside, as the Herd won game one, 7-4, and the momentum carried into game two. The four runs scored by the Zips in the first three innings of game one would be the only runs it would score in the remaining nine innings of the series.

“We definitely showed what kind of team we are in game two,” Smith Lyon said.

After a two-run homer by junior Grace Cheleman in the bottom of the fifth, the Herd run-ruled the Zips in game two, winning 8-0.

Marshall totaled 12 hits in game two, double what it had in game one. Senior catcher Katie Adams led the way in game two with three hits and two runs. She also had two hits – both doubles – and three RBIs in game one.

“I thought she finished last season as our hottest hitter,” Smith Lyon said. ‘Today, she came out and she was unbelievable up at the plate.”

Adams had just two putouts as catcher in game two, but she had seven putouts in game one, all resulting from sophomore pitcher Ashley Blessin strikeouts.

Although Akron scored four runs in game one, Blessin was only responsible for giving up one due to multiple errors by Herd infielders.

In game two, senior Laney Jones pitched for the Herd, striking out two batters and giving up only four hits.

“Yeah, she’s not intimidated,” Smith Lyon said about Halliwill. “She’s ready. When we watched Paige through the recruiting process, we were counting on her to be our lead-off and our center fielder, and she sure has delivered on that.”

The week is nowhere close to finished for Herd softball, as five more games await the team this weekend in the Thundering Herd Round Robin. Marshall will next take the field on Friday, March 5 against Bowling Green at 1:30 p.m. at Dot Hicks Field.