Softball to open season with seven games in five days 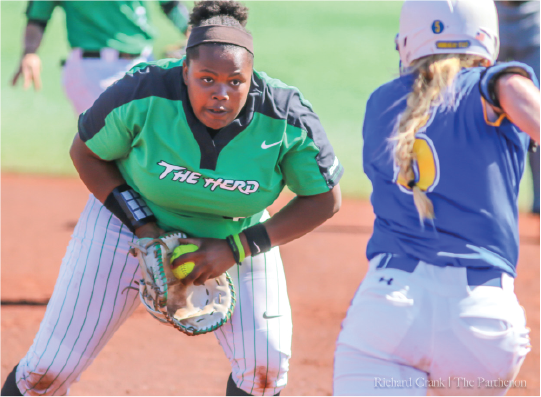 Marshall first baseman Aly Harrell (43) attempts to tag out a Morehead State baserunner during the teams’ matchup at Dot Hicks Field on April 11, 2018.

Kicking off the 2021 season with a double-header against Akron Wednesday, the Marshall softball team is scheduled to play seven home games in its first week in action. The Thundering Herd Round Robin takes place Friday, Mar. 5 through Sunday, Mar. 7.

Bowling Green, Saint Francis and Valparaiso will travel to Huntington to take place in the round robin.

Akron and Marshall’s matchup is not a new one; Marshall leads the series 9-2. The latest two games, also a double-header, took place almost exactly a year ago, Mar. 4, 2020.

Marshall took both games, winning 8-3 in game one and mercy-ruling 8-0 in game two.

After that second game, the season would not last much longer for either team, as the onset of the Coronavirus pandemic forced season cancellations across the country.

The Herd softball team was off to an 18-7 start, yet to begin conference play. Marshall ranked fifth in the nation as a team in batting average (.357) and first in the nation in home runs per game (1.92).

Individually, junior Mya Stevenson was tied for first in the nation in total home runs. She was also tied for second in total RBIs. Coming into the 2021 season, she was named to the All-Conference USA team.

Others named to the All-C-USA team were seniors Sierra Huerta, Saige Pye and Aly Harrell. Harrell was also voted as C-USA Preseason Player of the Year.

Although Harrell did not smack as many home runs last season as Stevenson, she still hit five homers along with 23 RBIs. She did have the second-best batting average on the team (.441), but her most considerable distinction was her team-leading .602 on-base percentage, which was directly related to the whopping 23 times she was walked. At first base, Harrell led the Herd in putouts, with 142.

Senior Laney Jones returns after leading the team in strikeouts (61) last season and overall innings pitched. Also returning, sophomore Ashley Blessin led the team in ERA (3.45) and had a record of 7-0. Jones had a record of 8-2 and an ERA of 3.62, closely behind Blessin.

Relief pitchers sophomore Delaney Heaberlin and senior Megan Stauffer are back as well.

Marshall returns one of the most experienced teams in Conference USA. Although the Herd had the most preseason all-conference players, the Herd was selected to finish second in the East division behind Western Kentucky.

Marshall will get an early chance to prove the eight voters who selected WKU wrong, as the Herd will begin conference play on Apr. 2 at home against the Hilltoppers for a four-game series.

Marshall will then play four more four-game series against the remaining east division teams before the C-USA tournament begins May 12.