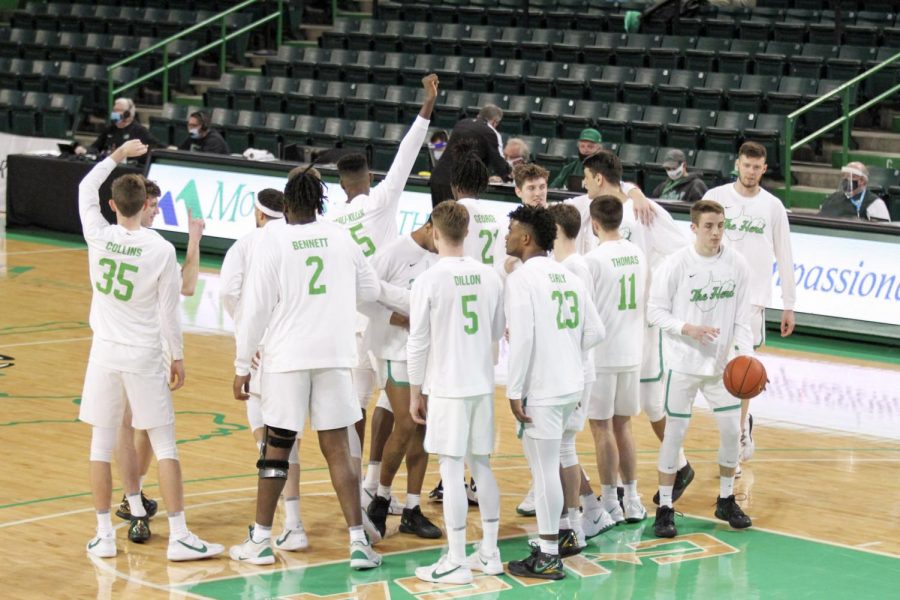 The Marshall men's basketball team gathers near the free-throw line during warmups prior to its contest against Middle Tennessee on Friday, Feb. 12.

Looking to improve its standing in Conference USA, the Marshall men’s basketball team will host the west division’s leader, the North Texas Mean Green, at the Cam Henderson Center for a two-game series.

“We got to go in with the same intensity and same preparation every week,” senior guard Jarrod West said. “We have to be focused; we have to be ready to go.”

Marshall sits in third place in the C-USA East division with an overall record of 12-5 and a conference record of 6-4. The Herd has won five out of its last six games, with Old Dominion being the sole loss in that six-game span.

North Texas is in first place in the C-USA west division with an overall record of 12-6 and a conference record of 8-2, having won seven of its last eight games; its lone loss came against Louisiana Tech.

“They have a good team,” West said, “and I think the most important thing is they play hard… If you don’t match their intensity, it’s hard to beat them.”

Leading the way for North Texas is senior guard Javion Hamlet. He averages 13.4 points, 4.2 assists and 2.9 rebounds a game.

“You better have good guards, or you’re not going to win,” head coach Dan D’Antoni said. “And we have three good guards who can take care of the basketball; they can score; they can pass… they’re willing defenders, and that’s why I think we’re a dangerous team to anybody we play.”

Kinsey and senior guard Jhivvan Jackson lead C-USA in points per game at 20.4. Kinsey also puts up 6.2 rebounds and 3.6 assists while shooting 56.9% from the field.

Overall, both teams have shot the ball efficiently from the field this season. They are ranked one and two in C-USA in field goal percentage, with the Thundering Herd shooting 48.2% and the Mean Green shooting 49%

Despite North Texas having the highest field goal percentage in C-USA, they rank seventh in scoring, putting up 72.3 points per game. On the flip side, Marshall is C-USA’s highest scoring team, scoring 82.5 points per game.

Marshall also has the edge when it comes to active hands, averaging more blocks and steals than North Texas.

One major category that North Texas has over Marshall is opponents points per game, with the Mean Green giving up 61.6 and the Herd allowing 73.1 points per game.

The two games are scheduled to take place at the Cam Henderson Center on Friday at 7 p.m. and Saturday at 2 p.m.

Friday’s game will air on ESPNU while Saturday’s will be on Stadium TV.