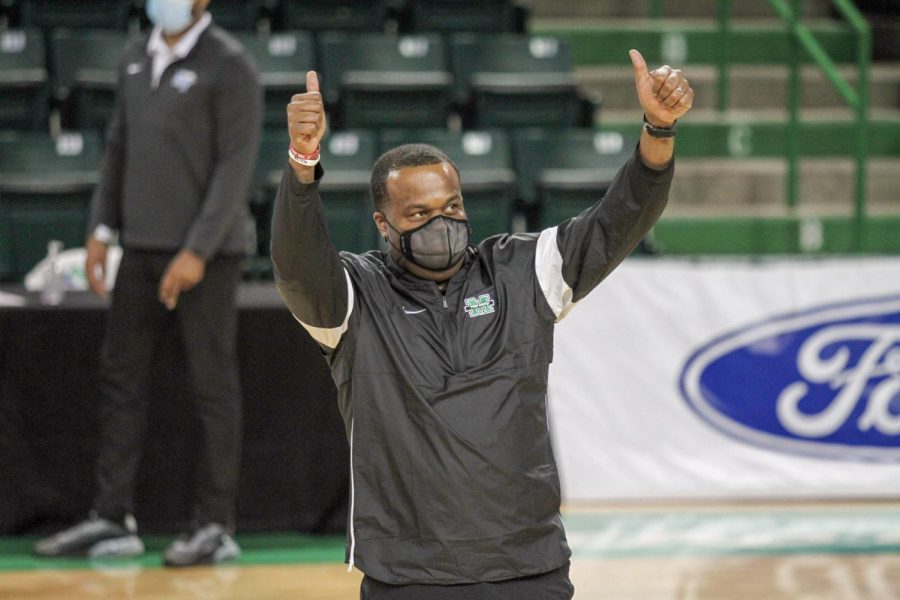 Charles Huff gives a dual-thrumbs up to the crowd after being introduced during a timeout at Friday’s men’s basketball game against Middle Tennessee.

Exhibited by the 2022 offer list, head coach Charles Huff is putting no limitations on what Marshall football recruiting can be. So far, under Huff, Marshall has offered several top players in the country, competing with the likes of Alabama and Ohio State.

Closing out the 2021 class, Huff signed Caleb Coombs, a high-caliber recruit from Washington, D.C. Huff said that Coombs signifies the quality of player that can fall in love with Marshall.

“Hopefully, some of the kids in the 2022 class and 2023 class and so on down the line will see that Marshall has a product that is top in the country,” Huff said, “and that should attract the top recruits in the country.”

But before they scour the country for top recruits, the first thing Huff wants his staff to be able to do is to “dominate the ring.”

“I consider the ring the five-hour radius around the university,” Huff said. “In a five-hour radius, most kids will be able to keep their support systems intact… and when you dominate the ring, you have more information, more detailed information on those kids”

Because that five-hour ring includes all of the state of West Virginia, there is a conscience effort by Huff and his staff to focus on recruiting in-state.

During Marshall’s national signing day press conference, each member of the staff was announced with a defined recruiting area, most with both a “ring” area and a national area. More specifically, almost every coach was assigned a slice of West Virginia to recruit.

Cramsey will have the Parkersburg area. Wide receivers coach Clint Trickett, born in Morgantown, West Virginia, will have north/central West Virginia and the eastern panhandle.

The local area will be under tight ends coach Bill Legg’s watch, and cornerbacks coach Dominique Bowman will team up with Trickett for northern/central West Virginia.

Although there is an evident focus of recruiting inside the ring, Huff said that they will obviously have to recruit outside of it. Still, the biggest motto for his recruiting philosophy, he said, is that “we have to out-evaluate other teams.”

So far, Huff and his staff have shown that it does not matter if a player is a four-star recruit or an unranked recruit; they will go after them if they fit the criteria.

But Huff said he and his staff are realistic, knowing that not every player they have offered will end up being the right player.