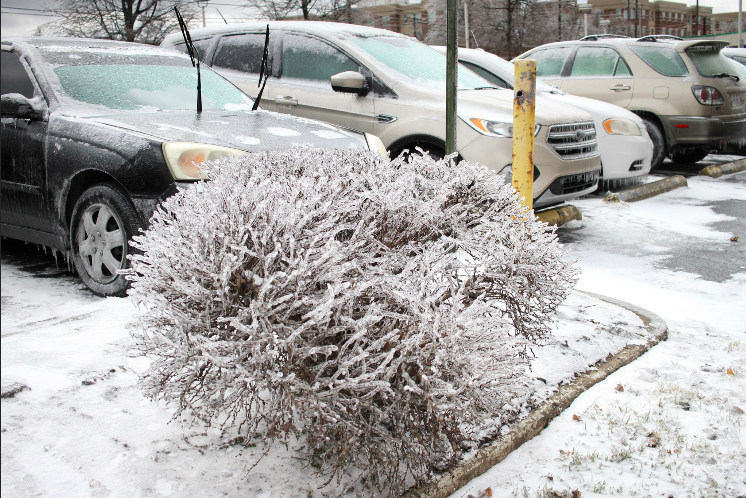 Vehicles and scenery around Marshall University's campus were covered in ice from the storms that came through Monday night.

In the past weeks, the greater Huntington area has seen a considerably large ice storm that – according to Appalachian Power as of 2 p.m. on Tuesday – has left 33,398 customers without power in Cabell county alone. Thus, the university decided to cancel both in-person and virtual classes; however, some students have felt the burden of the storm more than others.

Leslie Meade is a senior elementary education student from Buffalo, W.Va, who initially lost power last Thursday but has been out of an internet connection since last Wednesday. Additionally, her cell phone service is very weak because of the rural area where she lives. Although she said some professors have been very understanding, others have not been as accommodating.

When asked if professors are less understanding of students in rural areas, she said, “Most definitely. I think many of them believe we are all in Huntington, and that is not the case.”

Meade showed The Parthenon an email from a professor asking her to turn in an assignment by tomorrow, even if it meant traveling to campus, which she said she does not feel safe or comfortable doing right now.

Meade wishes more professors would understand the storm’s impact and simply extend the deadlines for assignments.

Other students across social media have complained about similar claims about professors asking them to drive to campus to complete coursework, so this does not seem to be an isolated incident that Meade faces.

Jamie Taylor, Provost and Senior Vice President for Academic Affairs, sent an email to the deans of each college after a Twitter account tweeted to President Gilbert about the many students outside of Huntington and professors still “piling on” lectures and assignments. Taylor asked the deans to be considerate of students who are still struggling with power and spotty internet.

Interim Dean of the College of Arts and Media, Wendell Dobbs, sent an email to faculty in the school which read, “Keeping up with assignments in the face of this weather crisis, coupled with the ongoing crisis of COVID, is undoubtedly pushing many students to the edge of their abilities.”

A spokesperson from the University responded to these issues saying: “Instructors have been asked to be understanding and to work with students who may be facing special challenges. Students who are having issues completing class work during this weather should contact the instructor first to see if they can work out accommodations. The Office of Student Advocacy and Support also is available to assist.”

Tyler Spence can be contacted at [email protected]marshall.edu.