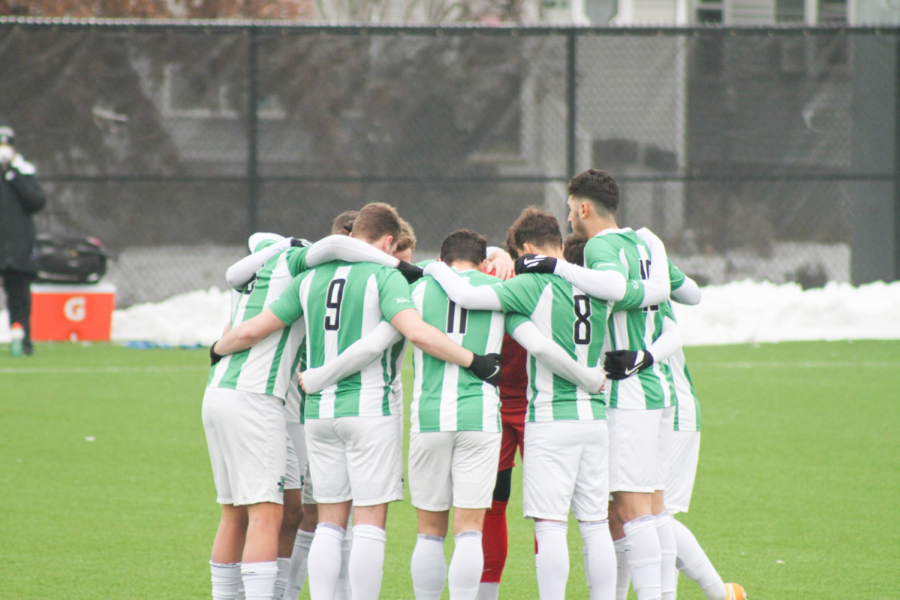 The Herd men's soccer team gathers during its matchup with Ohio Valley on Feb. 13.

In the spring 2021 season opener, the Marshall men’s soccer team tied with Ohio Valley University after a physical, overtime match.

For the Division II Fighting Scots from Parkersburg, West Virginia, the match was simply an exhibition, but for the Herd, the match will count toward its final record.

After the game, assistant coach Petsa Ivanovic said that despite Ohio Valley being a Division II team, the Scots were a quality, organized opponent.

A season ago, Ohio Valley charted a similar path to that of Marshall, both losing in the second round of their respective NCAA tournament.

“We struggled to find the pace at the beginning,” Ivanovic said. “And they were dangerous on the transition.”

The transition offense was the only way Ohio Valley could find shots offensively. The Scots took a mere four shots compared to Marshall’s 19.

It was on the transition that Ohio Valley earned the corner that led to its lone goal in the 71st minute; it was the first goal scored by either team.

Ivanovic said that because the team has not been able “to train as a unit for quite a while,” some of the things that the coaches wanted to address were not covered.

However, Ivanovic said that after Ohio Valley took the lead, the team was able to make some tactical adjustments that led to the Herd tying it back up at one.

Marshall, mirroring Ohio Valley’s goal, scored on a corner. In total, Marshall took 11 corner kicks in the game while Ohio Valley took 3. It was on Marshall’s eighth corner that Jan-Erik Leinhos fed the ball inside the box where Gabriel Alcides Alves was credited with heading it home with 3:20 remaining in regulation.

The game headed to overtime, of which two scoreless periods were played.

One of the most apparent aspects of the game was the physicality shown by both teams, mainly in the second half.

When it was all said and done, the two team’s combined for nine yellow cards, three on Marshall and six on Ohio Valley. All nine cards were shown in the second half or overtime.

Although the negatives of the game may be focused on by many, Ivanovic said that there were positive takeaways.

“We have a couple new faces that did pretty well for us,” Ivanovic said, “and some of the older guys played every single minute of the game which is amazing for it being the first game.”

Of course, the Herd is still awaiting the return of senior midfielder Pedro Dolabella, who is serving his suspension from the end of last season. The Herd were also without sophomore midfielder Max Schneider.

Ivanovic said the team will have to continue to shake off the rust and get back at it for Wednesday’s game against Lipscomb at 3 p.m. at Hoops Family Field.