Marshall men’s basketball explodes for 107 in romp of MTSU 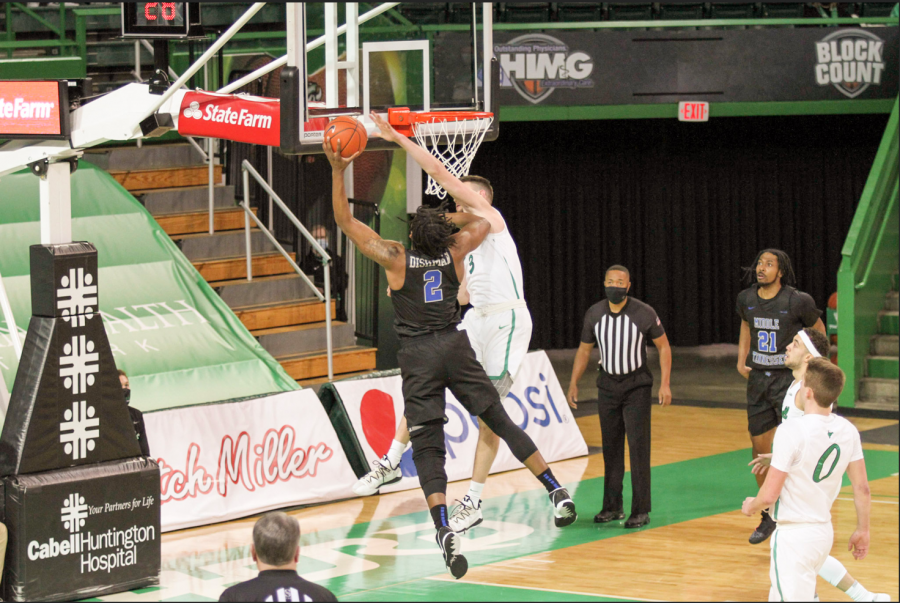 Senior Jannson Williams reaches to block a shot on the night he set the Marshall all-time blocks record.

In its first home game in 27 days, the Marshall men’s basketball team defeated the Middle Tennessee Blue Raiders 107-79 at the Cam Henderson Center in game one of the two-game series.

Although the Herd won by 28, it was not always easy. During the early stages of the game, Marshall found itself in a hole, trailing 14-0. The Herd did not score until the 14:58 mark in the first half.

Marshall was able to regroup and storm their way back, taking an eight-point lead at halftime. It was one-sided after that as the Herd outscored the Blue Raiders 62-42 in the second half.

“No panic in them,” head coach Dan D’Antoni said. “Once we got going, it looked like the floodgates opened up.”

In the midst of the Herd’s comeback in the first half, senior forward Jannson Williams passed Hassan Whiteside’s block record and now owns the school record in total blocks with 183.

“To be honest, I was just in the game and I did not realize (that I broke the record),” Williams said. “I was definitely hunting — it was on my mind, but it was good to see all the people and my family all excited — it’s a blessing.”

D’Antoni praised Jannson Williams after the game. He said that Williams is not the biggest forward, but he gets the job done guarding the rim.

“He’s probably the key to our team,” D’Antoni said about Williams. “I’m proud of him. I’m (hopeful) that the record stays in his hands because that’s 6”8 about 215 getting the job done.”

Marshall had four players who finished with at least 15 points: Taevion Kinsey (25), Andrew Taylor (16), Jarrod West (15) and David Early (15) who scored a career-high off the bench.

Marshall’s bench contributed 41 points, and D’Antoni said that the bench players gave the starters momentum, contributing a lot for the team.

“Everybody that was coming off the bench were making us better and contributing to the team,” D’antoni said. “There’s no reason why when (the bench) gets into the ball game they just don’t keep getting better.”

The Herd shot well from the floor and from beyond the arc, shooting 59.2% and 55.6%, respectively.

The lights out shooting led the team’s highest point output since December 2016 when Jon Elmore and company put up 111 against Toledo in overtime.

On the flip side, the 107 points put up by Marshall were the most points MTSU has given up since 2007 when Tennessee scored 109 points.

One bright spot for the Blue Raiders was redshirt junior guard Jalen Jordan who finished with a team-high 22 points while shooting 63.6% from the field and 62.5% from three-point range.

Middle Tennessee falls to 3-8 in Conference USA while Marshall improves to 5-4. The Herd and Blue Raiders will meet again Saturday at 4 p.m. at the Cam Henderson Center to close out the two-game series.