No. 15 Herd to face Rice Owls on Senior Day 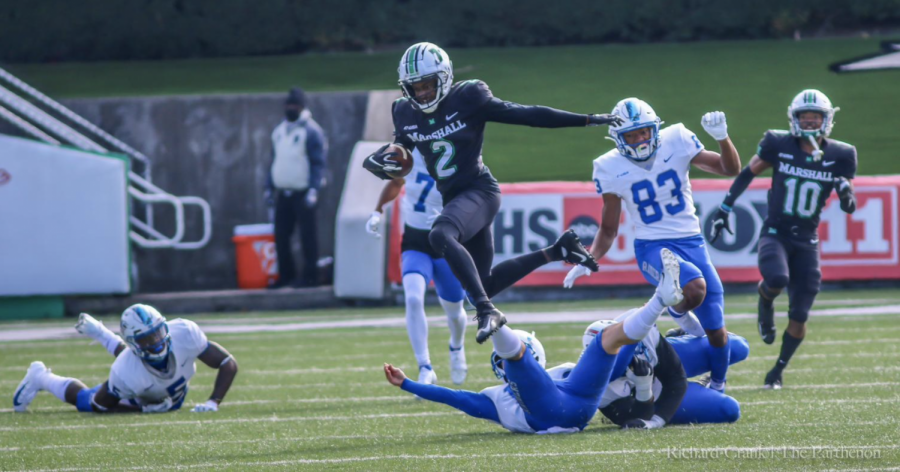 In its home finale against Rice (1-2, 1-2), the Marshall University football team (7-0, 4-0) can accomplish Saturday its first undefeated home regular season since 2015.

“It’s nice to be at home,” Head coach Doc Holliday said. “You know, our crowd’s been great all year, and I’m sure they’re going to show up this Saturday like they have the entire year.

With three weeks off between games for the second time this season, Holliday said it once again feels like preparing for a first game.

“We’ll just take what we got,” Holliday said, “and we’ll continue to prepare, and looking forward to getting to play again here on Saturday.”

That statement fell in line with what feels like the theme of the 2020 college football season – “take what you can get and control what you can control.”

Marshall has managed to get seven games played, but Rice University Owls on the other hand, has played only three games.

Based on comments made by Rice head coach Mike Bloomgren about the zero positive tests in Rice football program, Holliday said he had no reason to believe the game would not be played.

“Knowing him, the kind of coach he is, the kind of person he is, I’m sure they’ll show up here,” Holliday said about Bloomgren.

Adding to his confidence, Holliday said he trusts the leaders of his team to continue to keep everyone in line and on track with the protocols necessary to continue playing.

“We’re not perfect,” Holliday said. “Nobody has all the answers in today’s world. I can assure you that, but our kids deserve a lot of credit.”

On the field, Rice has a win over Southern Miss, a double-overtime loss to Middle Tennessee and most recently a loss to North Texas.

“They’ve played everybody tough to be honest,” Holliday said. “Number one, they’ve got a bunch of kids that love to play. You watch them play; they play extremely hard.”

Holliday said the biggest difference for the Owls this year is their transfer quarterback, Mike Collins.

“He can make all the throws,” Holliday said, “and he’s kept them in every game they’ve played.”

Collins has thrown for 801 yards and 10 touchdowns in three games. He has a passer efficiency rating of 176.01.

Perhaps more impressive for the Owls through three games, they have a receiver, Austin Trammel, who is second in the conference in receiving touchdowns. Trammel is averaging 111.7 yards per game, which is also second best in C-USA.

Marshall’s receiving core has not been fully healthy in one game all year with sophomore Broc Thompson missing the last three games.

If there is one area Marshall can almost assuredly find success, it is the turnover battle.

“Fortunately for us, I think we’re leading the league in turnover margin,” Holliday said. “and that’s part of the reason we’re having success we have.”

Marshall and Rice is slated to kick off at noon, airing on ESPN+. It is also available on the airwaves on WMUL-FM 88.1.