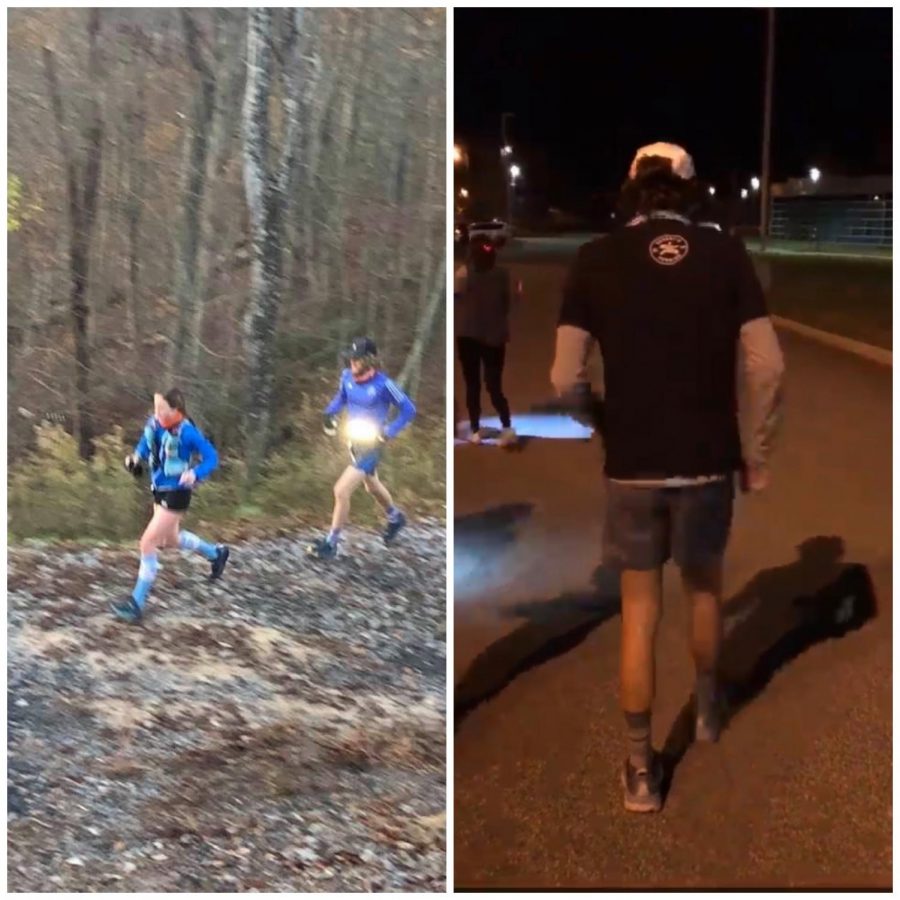 HollyAnn Swann and Caleb Bowen (Left) and Dan Green (Right) in the midst of running in their respective races.

The coronavirus has prevented a lot of challenges when it comes to competing in sports. Many sports were not able to participate in their respective seasons, causing them to be moved to the spring.

However, cross country at Marshall University was one of the few Olympic sports that were able to compete during the global pandemic.

Not only were student-athletes competing for the Herd, but the coaching staff as well.

Cross Country and Track and Field Assistant Coach Caleb Bowen and Volunteer Coach HollyAnn Swann both competed in an Ultramarathon race, this one being local. “Rim to River 100,” located at the New River Gorge was the first 100-mile trail race in West Virginia.

Bowen finished the race with a time of 18 hours 23 minutes and 57 seconds.

“I entered back in February and it was the very first 100-miler in West Virginia,” Bowen said. “That was the big luring factor going into it. I had wanted to sign up for a 100-miler at some point in my life as a runner, and I never thought it would be this early on in my life. I was terrified of the distance the whole time leading up to it.

Bowen and Swann were able to compete in this race, despite the ongoing COVID-19 pandemic.

“That was the biggest factor,” Bowen said. “The race director did a fantastic job. Instead of having 200 people all together, he split everybody up into waves based off of the rankings they go by from the sign-up website that we used.”

All of the racers were limited to 25 people each in the waves to ensure safety and social distance and were given masks. The competitors were asked to pull them up when arriving at the aid stations or passing other people. Temperature checks were performed prior to the start of the race.

Bowen coached Swann in the 2017-18 season where she had a year of track eligibility left. She helped out during cross country and indoor as a volunteer assistant.

“She is my athlete, but is my training partner and my best friend,” Bowen said. “We do almost every run together, training and races. I’ve paced her through the Marshall Marathon as well as other races. Whenever she signed up, we kind of had a mutual agreement that we were racing each other at that point.”

The two were together for the first 17 of the 100 total miles.

“When the gun went off, we were together. It’s just like normal,” Bowen said. “We train together, we pretty much do everything, prepping together as well. It was really special to have those 17 miles to run together. I was scared the whole time that she was going to come back and beat me. It kept me motivated and running. It was a fun time.”

Bowen created a pace chart based on a certain mile distance and aid station. He said the biggest thing was the overall mental prep and figure out what he needed to do at each aid station, whether it be a change of clothes or to grab a snack. 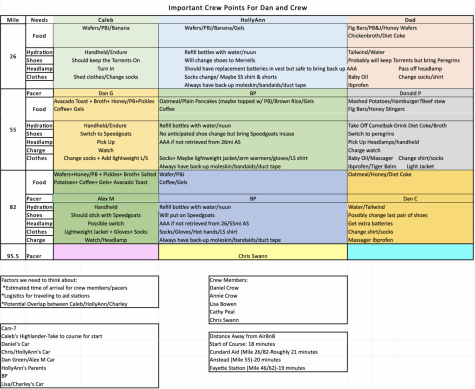 The racers were allowed to have pacers from miles 55 to 82, and mile 82 to the finish.

“Dan Green and Alex Minor did fantastic,” Bowen said. “They got my mind off of just the discomfort and the not feeling great. They just kept me running. As Dan said, ‘We got to get the dogs rolling.’”

Bowen was able to race with his father, Charley Bowen, who inspired him to begin his running career.

“It was very special,” Bowen said. “It actually worked out great because HollyAnn finished right in front of my dad. He’s the guy that got me running. He inspired me when I was little, probably around 9 or 10 years old to sign up for my first 5K.”

Chris was HollyAnn’s crew chief and helped pace her, along with Brandon Perry. Daniel and Annie Crow were Bowen and Charley’s crew chiefs.

“It takes a village to get somebody 100 miles,” Bowen said. “You’re going to have some things that happen. The people that helped were just amazing. I cried all the way back home as I was driving back thinking about how special each person was.”

Because Bowen won the race, he gets a free entry into next year’s ultra-race. He said he plans to run more in the future.

“I’ll definitely do it again,” Bowen said. “I’m a homebody and it’s definitely special in my heart. It was fun.”

Swann finished the race with a time of 27 hours and 57 minutes.

“For the last two and a half years, post being a collegiate athlete, I’ve focused on marathon distance,” Swann said. “Right after my last marathon, the Houston marathon, I started doing some trail runs. Trail running ultras is something that I’d really like to try or at least see what I could do.”

The Rim to River 100 race was not exactly what Swann had in mind but decided to tackle the challenge and race it anyway.

While it was tough to face a knee injury, Swann said it was still incredible to be able to cross the finish line at the end.

“It was overwhelming. It wasn’t quite ideal,” Swann said. “I did get injured halfway through. It wasn’t just powering through soreness. It was powering through injury. Just to go through that mentally and still be able to cross the finish line was an incredible experience.”

She had three goals in mind, but more importantly focused on finishing the race, despite the challenges faced.

Swann also praised the entire crew, just like Bowen for the amount of love and support that was given to them in order to power them through the entire 100-mile journey.

“It was really incredible having a lot of people being able to help,” Swann said. “I was blown away that I have a friend who is willing to be there for me over 40 miles. Brandon decided to be a pacer for 40-and-a-half. My husband was there for the last four-and-a-half. Both were special in their own way. It was incredible that somebody would be willing to do that much for me.”

Swann said she plans to run more ultras in her future after she fully recovers.

“My body is wrecked. Finishing the race, you’re like ‘oh my gosh, I’ll never do that again.’ Each day you feel better,” Swann said.  “It’s without a doubt in my mind, that for sure when I’m able to get healthy, I’d love to sign up for another ultra, definitely shorter. I want to come back to the 100-miler.”

The ultimate goal was to see how may laps the competitors could run throughout the 24 hours. His final time was 17 hours and 23 minutes.

“A 24-hour race is not really a race,” Green said. “It’s more like an endurance challenge because there is no set distance. You just have to mentally keep going and the person that goes the furthest, wins.”

Green said he had always wanted to see how far he could personally run since he started his career.

“Ever since I started running in ninth grade, I have thought about how far I could really run,” Green said. “The first thought of doing an ultramarathon was always the 24-hour race. It’s just a classic type of run that not many people do, but I think it is one of the purest types of ultras you can do because you can stop whenever you want.”

Originally, Green had signed up for a 50K race, but it was canceled. He said he went with his gut feeling to do a 24-hour first and had never completed anything like this before.

“I had only run for five hours up until this point and the thought of going for 19 more hours sounds crazy,” Green said. “Every hour that clicked off was awesome. It was a lot slower than my regular running pace, so I felt like I could really enjoy it more. Plus, everyone in the race was a bit crazy, so the company was awesome. One thing that was crazy was when I finished and tried to lay down in the back of a car, I wasn’t cold, but I couldn’t stop shaking for like forty minutes, which was scary, but after that I was good. Just very sore feet.”

Green also helped pace Bowen in his 100-mile race and said it was worth giving back to his coach in five years of collegiate running.

“Pacing Bowen was awesome,” Green said. “Just being able to give something back to a guy that has given me so much over the past five year was a great feeling. Watching him just keep crushing it mile after mile and even when I thought his legs were cooked, was so inspiring. It definitely made me more confident going into my race the next weekend. Our bodies can handle a lot more than we think.”

Green said he plans to do more of these races in the future and is on the search for one to do in about three months.

“The recovery has been (kind of) rough, but good,” Green said. “I have been able to get at least a slow mile in everyday because I have a year-long running streak going, so I had to keep that. The first week I couldn’t go much further than five miles without feeling like I did at the race. But now, I think I am back to normal.”