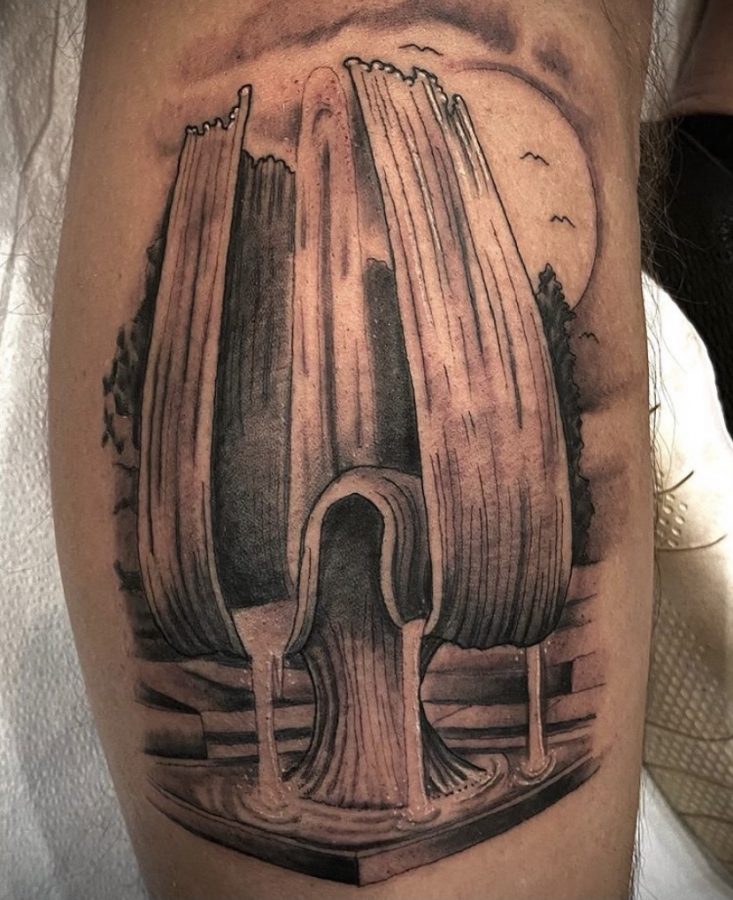 To show respect to the loss of 75 players, coaches and fans 50 years ago, Huntington Fire Department chief Chris Wilson, decided to get a memorial fountain tattoo three days before the ceremony.

“I was trying to think of something I could do for the anniversary and I figured since I already have tattoos – how about one more?” Wilson said.

Son of two Marshall alumni, Wilson said he learned about the plane crash early on to “recognize and remember,” since he was born five years after the crash. Wilson’s parents both lost several friends that died in the plane crash.

After two hours at New Hope Tattoo Gallery in Barboursville, W.Va., Brent Benson, full-time tattoo artist, recreated a visual representation of the memorial fountain on the side of Wilson’s calf. The tattoo shows a detailed black and white version of the fountain with a scenic view of trees, birds and the sky.

The memorial fountain, created by Harry Bertoia, is a 6500 13’ sculpture of bronze, copper tubing and welding rods presented outside of the Memorial Student Center.

Benson said that Wilson’s tattoo was the first memorial tattoo he has created of Marshall University and that he has no personal connection with the university or the plane crash. He said to create a realistic tattoo, like the memorial fountain, he tries to take a “softer approach,” but the style is not different from his other work.

“Even though it has been 50 years; it is still very real and constant,” Wilson said. “It still seems like yesterday to a lot of the people in Huntington and it is still a lot of raw emotion.”

As an active member in the community, Wilson said he runs into at least one person who has been directly affected by the place crash.

“The town and university are connected and will be connected forever,” Wilson said.