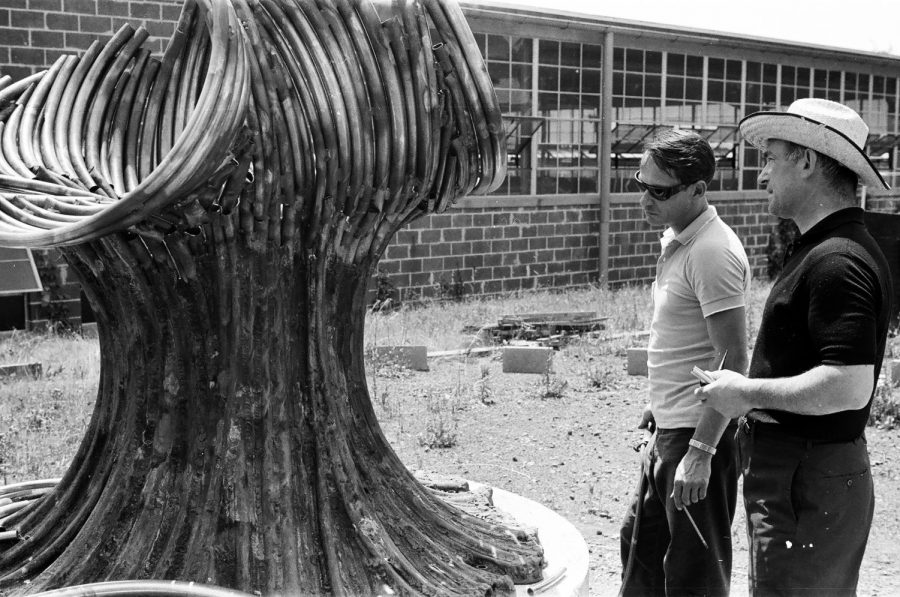 The memorial fountain, created by Harry Bertoia, honors the 75 lives that were lost.

In response to 50 years since the Marshall University plane crash on Nov. 14, 1970, Huntington Museum of Art (HMA) is displaying the art of Harry Bertoia. Bertoia created the memorial fountain that crafted an abstract representation to the loss of 75 players, coaches and supporters.

“Harry Bertoia’s work is timeless,” Celia Bertoia, founder of ‘Harry Bertoia Foundation’ and youngest daughter of the artist, said. “Art should evoke some kind of emotional response and I think when you look at Bertoia’s work there is a lot of life, movement and joy.”

‘Rising, Renewing, Reaching: Harry Bertoia and the Marshall University Memorial Fountain’ exhibit in HMA’s Switzer Gallery displays various pieces from Harry Bertoia’s collection of 50 public works in his career such as jewelry, monotype drawings, steel-wired chairs, sculptures and a focus on the Marshall fountain. The exhibit will be open to the public through Jan. 3.

Harry Bertoia agreed to do a memorial, but just like his other work, he was going to make an abstract piece.

From the Harry Bertoia Foundation webpage, Harry Bertoia is quoted to have said, “You go through these emotions – joy, suffering, happiness, sorrow – and if you happen to have a bit of metal in your hands – you shape it.”

Bertoia created the 6500 pound 13’ high sculpture of bronze, copper tubing and welding rods that is still presented outside of the Memorial Student Center.

Hatten said Bertoia’s abstract and “controversial” memorial has allowed viewers to concentrate on “an internal feeling that they have.”

“We don’t need to see something realistic,” Hatten said. “Time has proven that it is a successful memorial. The quality of the sculpture, the fact that it is not representational – you bring your own meaning.”

Celia Bertoia said she remembers sitting around the dinner table, having a conversation with her family that Marshall officials wanted a buffalo. She said it was humorous then and understands, even more today, why her father made the fountain in an abstract form.

“Harry would throw himself into each project,” Celia Bertoia said. “From start to finish, he would put all of his passion, love and joy into whatever he was working on.”

On Nov. 13, Celia Bertoia plans to present the Dr. Lawrence B. and Shirley Gang Memorial Lecture at HMA and will see the finished product of the fountain for the first time.