EDITORIAL: The world is burning 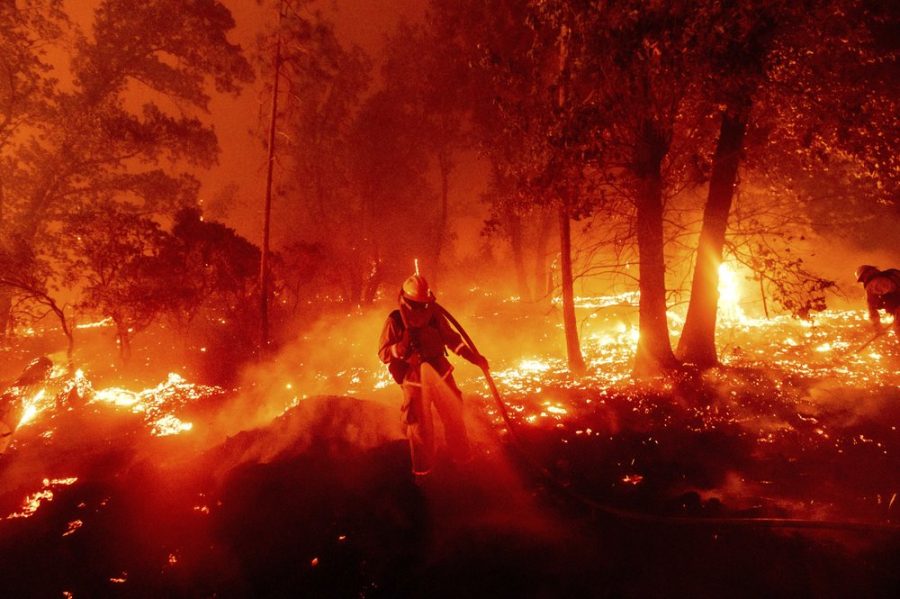 A firefighter battles the Creek Fire as it threatens homes in the Cascadel Woods neighborhood of Madera County, Calif., on Monday, Sept. 7, 2020. (AP Photo/Noah Berger)

The world is burning, and our leaders are failing—on every level—to extinguish the flames.

This is us screaming for emergency action, and not just from the mainstream news media.

Whoever becomes the next president following Election Day Tuesday must make combatting climate change a serious priority of his administration; However, examining the climate policy plans and campaign promises of both major candidates does little to inspire hope.

President Trump frequently has expressed his belief that climate change is a hoax. Not only will President Trump, if re-elected, fail to enact a climate policy which scientists say will be necessary to—quite literally—save the world and our species, but his administration also will continue contributing to every issue exacerbating this man-made crisis. It is difficult to imagine another four years of President Trump inspiring—solidifying—anything more than our own impending doom.

On the other hand, Joe Biden’s climate plan also is thoroughly inadequate, failing to meet most—if not all—of the bare minimum requirements scientists say we must meet to save ourselves.

In a 2019 report headlined “Joe Biden looks to revive Obama’s climate plan. Scientists say that’s not good enough,” senior HuffPost editors state: “At a moment when mounting reports from the world’s top scientists indicate humanity is barreling toward climate catastrophe and ecological collapse, Democratic presidential candidate Joe Biden is preparing a climate policy that appears to put the United States back on the pre-Trump trajectory.”

As climate scientists perpetually scream that humanity must take unprecedented, radical action immediately—and should have done so long ago—a Biden administration seems to ensure little more than a return to the pre-Trump normalcy which led us into the crisis we currently face.

As the HuffPost report notes, Joseph Majkut, a climate scientist at the conservative Niskanen Center said, “Reheating the Obama administration’s regulations-plus-Paris approach will be totally insufficient.”

During the Democratic primary, the Sunrise Movement gave Biden’s climate plan a grade of “F,” noting that it failed completely to meet the bare minimum standards of the Green New Deal. Biden has since modified his plan, but it still is inadequate, even if one chooses to believe his post-primary commitments are genuine and will be carried through.

The Green New Deal outlines a plan in-step with recommendations from the United Nations’ Intergovernmental Panel on Climate Change (IPCC). This plan includes, among other measures, the U.S. leading a reduction of global carbon emissions from human sources to 40%-60% below 2010 levels by 2030. More progressive plans, such as Sen. Bernie Sanders’s, also call for a total ban on fracking.

Even the IPCC’s plan—which Biden fails to meet—is seemingly inadequate.

“You may have missed it, but a recent report declared that the main strategy of world leaders for tackling climate change won’t work,” a 2019 report in The Conversation states. “It’s called green growth, and it’s favored by some of the largest and most influential organizations in the world, including the United Nations and the World Bank.”

Green growth, the report explains, is “the idea that society can reduce its environmental impacts and slash its emissions, even while the economy continues to grow and the quantity of stuff that’s produced and consumed increases.”

The report states, citing a 2019 report released by the European Environmental Bureau, that, “There is no evidence that societies have ever managed to decouple economic

growth from emissions at this scale in the past, and little evidence they have the capacity to achieve it in the future.”

Despite Biden’s post-primary promise to achieve net-zero carbon emissions by 2050, as the Green New Deal and the IPCC recommend, his plan fails to outline annual clean energy investments (2% of GDP) which economists say will be necessary to meet that goal. While other Democratic primary candidates proposed up to a $16.3 trillion investment in clean energy before 2050, Biden’s plan ensures only $1.7 trillion. These are just some of the many ways Biden’s plan falls short of bare minimum requirements.

As noted in a recent Dollars and Sense report: “To begin with, the Biden proposal does not do enough to transform the transportation sector, which is the largest source of climate pollution in the United States. Despite its emphasis on electric vehicles, it never sets a target date for all new vehicles to be electric (…) Also antithetical to [environmental scientist Barry] Commoner’s prescription, Biden says he intends to ban fracking only for oil and gas production on federal lands, not more broadly.”

And the fossil fuels industry knows a Biden presidency poses little threat to its continuing business as usual—and irreversibly damaging the planet in the process.

The Dollars and Sense Report states: “Matt Gallagher, president of Parsley Energy, a West Texas oil producer, told the New York Times that, ‘There is a lot of room for oil and gas’ in the Biden plan. The Biden proposal also promises to support carbon-capture technology. This still unproven and prohibitively expensive technology would allow coal-powered power plants to continue to generate electricity if they can capture and store their carbon waste. Both storing the carbon, and the likely leakage, promise to be environmentally destructive.”

We cannot allow ourselves to become complacent because of insufficient media coverage or to be fooled by the false promises of dishonest politicians. Our leaders are failing us, and we must demand better in every aspect of implementing a solution to this crisis.

Incremental change is not enough. We need to radically transform our society to save ourselves from extinction and from literally destroying our only planet. The time to sound the emergency alarms was yesterday, but we—young people, the news media—must continue doing so as long as we face this existential threat, and particularly as long as our “leaders” continue failing to acknowledge reality and to implement an adequate solution.