No. 16 Marshall steps out of conference to face UMass 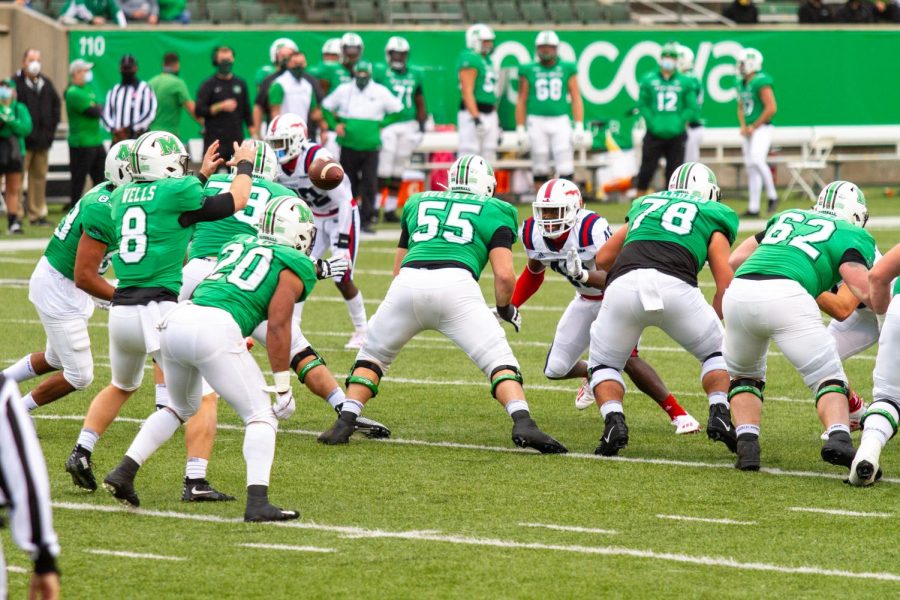 Matching up in its third non-conference contest of the season, the AP Top 25 poll No. 16 Marshall Thundering Herd football team (5-0, 3-0) will face off Saturday against the UMass Minutemen (1-0) in Joan C. Edwards Stadium.

For the second game in a row, Marshall will face a team who is playing only its second game of the season.

In a situation where you do not know much about your opponent, the best thing to do is focus on yourself, Head Coach Doc Holliday said. “We’ve got a standard that we have to play up to.”

In the Minutemen’s lone game of the season, they were throttled 41-0 by Georgia Southern. Because Georgia Southern ran an option offense, the film on UMass’s defense is not necessarily applicable to what it will look like against the Herd.

Thus, in order to understand the breadth of the Minutemen’s schemes, the staff has had to watch film of other teams of which current UMass assistant coaches previously coached, Holiday said.

But ultimately, Holliday said, it comes down to being able to make adjustments early in the game on both sides of the ball. The experience laden Marshall offensive line will play a key role in making some of those adjustments, he said.

Sticking with the offensive side of the ball, Holliday said that the receiving core will have all its guys back in the lineup with the exception of sophomore Broc Thompson.

Both redshirt senior Artie Henry and redshirt sophomore Corey Gammage stepped up in relief for a banged up wide receiver position, combining for 291 receiving yards and three touchdowns in the last two games.

The Herd offense has produced a fairly balanced attack so far this season, averaging 198 yards on the ground and 230 yards through the air.

On the other hand, the Minutemen offense struggled in its lone game against Georgia Southern, totaling only 191 yards of offense.

Last season, UMass was No. 118 in the country in points scored and No. 126 in total yards. But, as Holiday said, the Minuteman “totally revamped their roster” from a season ago.

“The players are all totally different,” Holliday said. “And then from a personnel standpoint, they’re a lot better than they were a year ago.”

Redshirt senior offensive lineman Alex Mollette said that the Minutemen are a big and physical team that likes to play sound defense.

“They’ve got some bug dudes on that defense,” Mollette said. “We’re going to have to bring what we have to the plate. But… we like to hang our hat on being physical as well.”

UMass was not a team on Marshall’s original schedule. They were added to the docket on Oct. 19, expanding the Herd’s schedule to nine games.

Because last weekends’ matchup with the Florida International Panthers was postponed due to COVID-19 complications within FIU’s program, the total number of games on the Herd’s schedule decreased back to eight.

“We’ve got to control what we can control,” Holliday said. “Unfortunately, the FIU game was canceled. Fortunately, for us, we’re excited that UMass is coming to town, and that we have another game.”

With just two home, conference matchups left, Marshall has no away contests remaining as the schedule currently stands.

But that could change with the possible rescheduling of lost away games like Rice, East Carolina or FIU. There are two weekends open for any of those three to be rescheduled: the weekends of Dec. 5 and Dec. 12. The conference championship is scheduled for the following weekend on Friday, Dec. 18.

As an independent, UMass originally postponed its season but announced on Sep. 21 that it would play football in the fall. Currently, the Minutemen have three total games on its 2020 schedule. The third game is scheduled for Friday, Nov. 27 against Liberty.

This Saturday’s game is slated to kick off at 2:30 p.m. and will be televised on ESPN+. It will also be broadcast on WMUL-FM 88.1, the student voice of Thundering Herd athletics.