Athletes of the Week: The Offensive Line 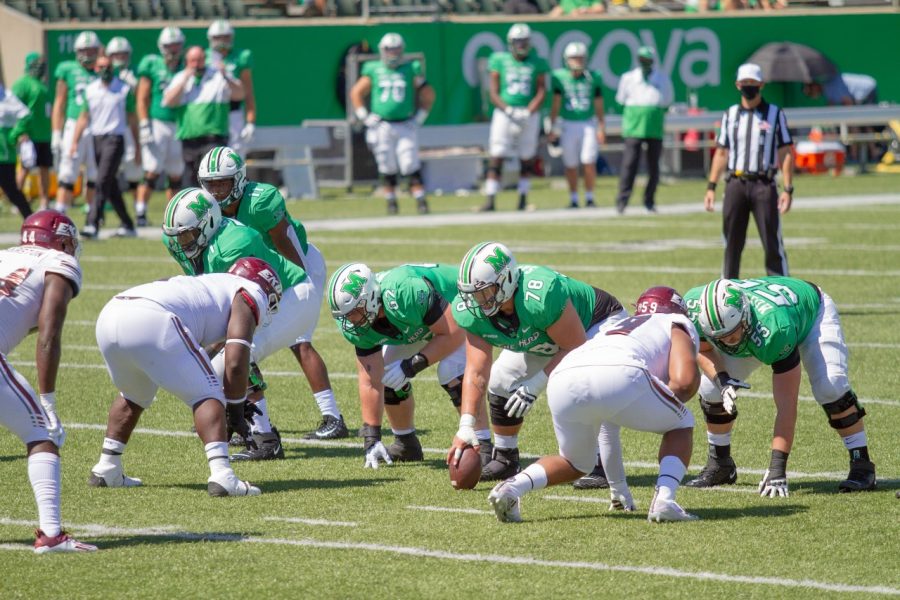 Primarily due to their performance against Western Kentucky and secondarily because of the sustained success in the three games this season, all five starting Marshall offensive lineman have earned athlete of week honors.

Leading the way for 181 rushing yards and four touchdowns on the ground, the senior laden O-line took it to the Western Kentucky front, getting a great push along the line of scrimmage for much of the game.

Holes opened by the offensive line were present as early as the second play of the game when Knox found the gap on the inside zone play between center Alex Salguero and left guard Alex Mollette and burst for a 45-yard TD run.

On most run plays, especially in the first half, the running backs would be good for at least three yards every run because of the push the O-line was getting at the point of attack. In the first half, Marshall ran the ball for 6.3 yards per carry.

The positive run-blocking shown in the first half by the Marshall offensive line was even more impressive considering the pedigree of the Western Kentucky defensive line in the landscape of Conference USA.

It is a D-line that was led by 2019 Conference USA Defensive Player of the Year DeAngelo Malone, who was kept in check by the Marshall O-line.

Not only was he and the rest of the Hilltopper D-line held in check in the running game, but their disruption was also tampered by the Thundering Herd O-line in pass protection. In fact, Marshall’s pass protection was even more impressive when called upon.

Quarterback Grant Wells was sacked one time, but that was on all-out blitz on which the man who made the sack was supposed to be blocked by the running back.
There were multiple instances where Wells had a clean and clear pocket to throw the ball. A perfect instance of that was on the third drive of the game of which Marshall got itself into a third and long. On the third-down play, Wells had enough time to step into a clean pocket and deliver the ball to Willie Johnson for a first down. Ultimately, that conversion led to Marshall’s second score of the game.

Although the offensive line had a solid outing against the Hilltoppers, it may or may not have been their best performance of the season because the unit has been a key cog to the team’s success in all three games this season. On the year, the Herd is averaging 227 rushing yards per game with nine rushing touchdowns.

They put up 216 yards on the ground against Appalachian State and 282 on Eastern Kentucky.

If the O-line can continue to play up at the level it has in the first three games, or even take a step forward, Marshall will be in a good position to win the rest of its games.

Louisiana Tech, the next team on the Marshall schedule, should be one of the more difficult matchups the Herd O-line will face the rest of the season. Through four games, the Bulldogs defense is giving up 111 yards per game on the ground which is currently 23rd best in the nation.