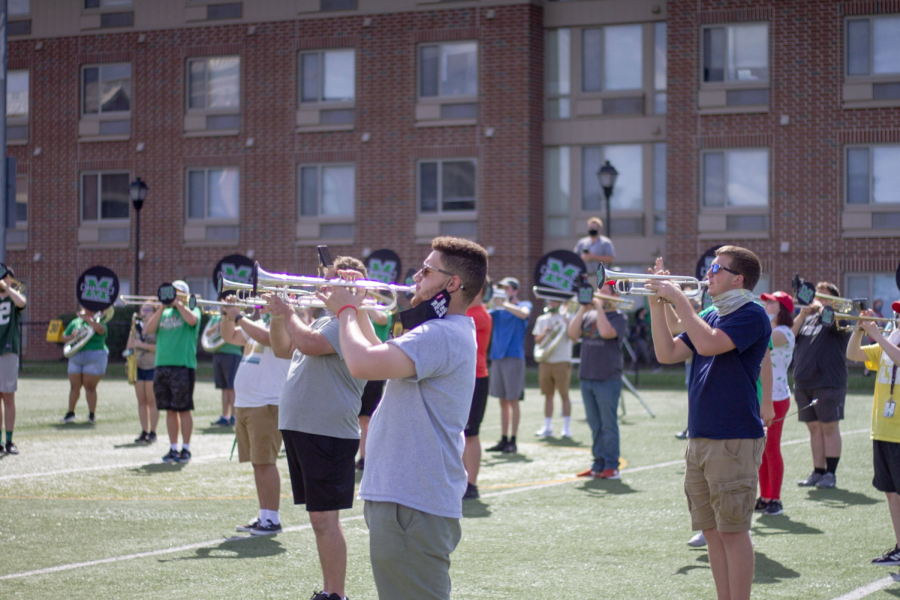 Marshall University’s band and majorette team are adjusting to an alternating routine of performing, practicing and the upcoming homecoming.

With recent changes in the Marshall University athletic direction, the band and majorettes are adapting to the recent changes this year for sports, while facing the ups and downs of coronavirus precautions during this year’s season.

As precaution, the choice was made to alternate between the dance team and cheerleaders on the field, reducing the number of twirlers and splitting the band in smaller groups at a time – while also performing in the stands among the fans.

Feature twirler Calise Henry, though bummed by missing out on Marshall University’s first football game of the season, is looking forward to twirling again alongside her teammates.

“It’s kind of weird this season because we’re not performing like we usually do on the field during halftime and pregame,” Henry said. “So, we basically have just been working on playing music and performing in the stands.”

Initially, the band itself was forced to reduce its size from 150 band members per game to 40. Now they are allowed 72 members per game, with no intention of going beyond that number, partially due to crowd sizes the last two home games.

The band has been taking cautious measures to ensure a safe and healthy season, having to abide by the mask mandate at practices, the band having their own specific health checkups and social distancing to the best of their ability.

While splitting the band, the band members have a special cover for the instruments holes that produce sound to reduce spread of germs while performing during games.

The rotation of the dance team and cheerleaders alternate between every other game, though as the cheerleading team has more members than the dance team, they are reduced to groups that are either on the field or in the stands.

Now that halftime and homecoming has made major changes as well, the performances will have a drastic change compared to last year’s season, it will be completely digital from now on until further notice.

“They are trying to record us with the drones that we use for our [promotional] videos, and they are going to record our halftime show that we’re going to do on the practice field,” said Henry.

In a situation where a digital halftime show would not work out for the upcoming football games, the plan is to have the band and majorettes perform in the stands with adjustments to the routine – though the band will perform all songs as originally planned.

While the band, majorettes, dancers and cheerleaders are adjusting to the changes, most of them are staying as positive as they can for this season.

“It’s weird, but I’ll take anything as long as I’m performing, said Henry.” “Just being in the stands is enough for me this season.”

Jena Cordle can be contacted at [email protected]