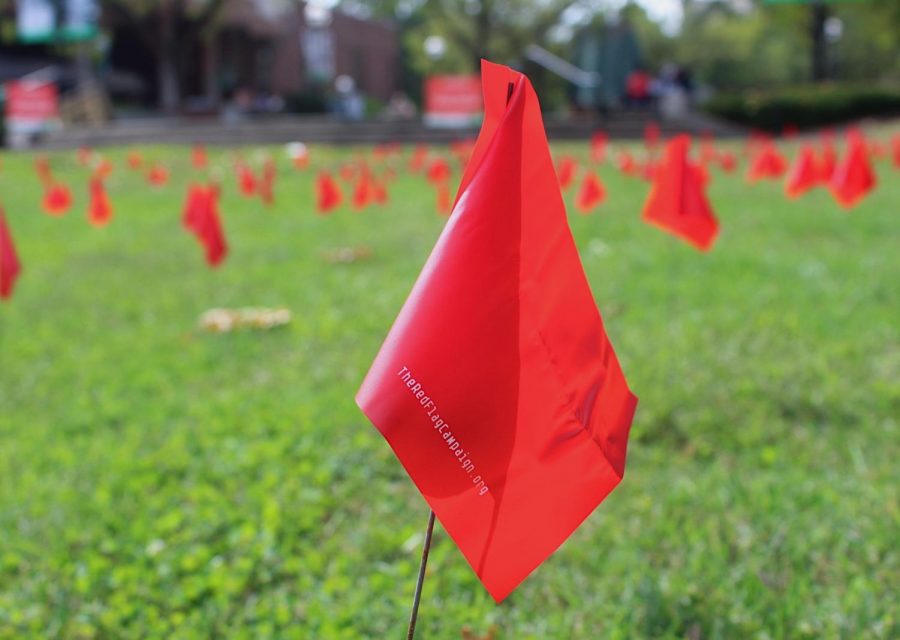 hopes that students can notice the red flags in relationships.

Violence Prevention and Response Program Coordinator, Liv Giovingo, said the flags that were planted on Sept. 18, in partnership with The Red Flag Campaign, represent what is considered the “red zone” period.

“We do it this early because nationally between the start of the semester until November is when most of the sexual assaults that happen on campus will happen,” Giovingo said.

The Red Flag Campaign is a national project created in 2005 in response to a proposal from the Virginia Sexual and Domestic Violence Action Alliance. The Violence Prevention and Response Program in collaboration with the Women and Gender Center operates the campaign at Marshall University every year.

Women and Gender Center Program Director, Claire Snyder said she hopes these flags will inspire others to reach out and help someone in danger.

“When I see these red flags I think about the people that I care about in my life, whether that is people I know in my personal life or even students I have come into contact with that experience relationship abuse, sexual assault, stalking or some other form of violence,” Snyder said. “I am really proud of the way that our campus and our students look out for each other.”

Giovingo said it is just as important for bystanders to have the education needed to prevent abuse. The Violence Prevention and Response Program recommends using the three D’s: Direct, Delegate and Distract.

The three D’s are ways that a bystander can help someone potentially at a risk by asking directly, delegating someone with a higher position to step in the conversation, or distracting to allow someone to exit an uncomfortable situation.

According to the National Domestic Violence hotline, more than 12 million people over the course of a year are victims of rape, physical violence or stalking by an intimate partner.

Counselors are questioning if statistics will rise due to couples in quarantine.

Giovingo said that it is concerning if someone does not have a phone or access to Wi-Fi in an abusive relationship, they could potentially be “trapped” in that house.

Although there are some concerns in a drop of calls for counselors, Giovingo said there has been higher availability since millennial and gen z’s prefer virtual communication methods more than in person.

Giovingo said she wants students, on or off campus, to know that resources are available to them on campus and can visit her office in the Rec Center or contact her online.