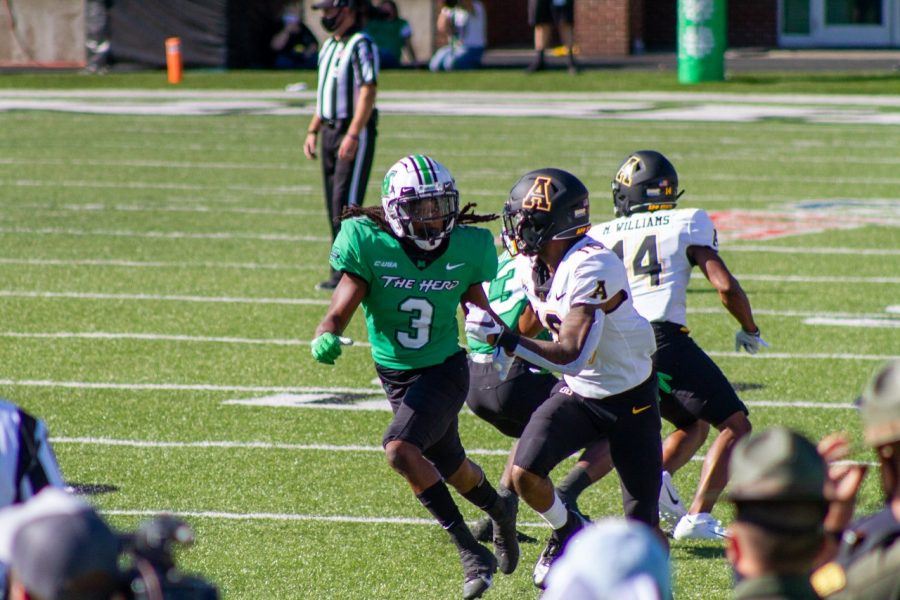 Steven Gilmore makes a tackle against an Appalachian State player during the game.

Not only did Gilmore’s performance help Marshall come up with the victory over Appalachian State, but he also overcame adversity and played with the mindset required of a cornerback.

After the Marshall offense went on a 14-play drive that resulted in gaining a 10-7 lead, the Appalachian State offense took the field with 2:28 left in the first half with a chance to take the lead into halftime.

On the third play of the drive, App State quarterback Zac Thomas targeted Gilmore down the field, and although the ball was not on target, a flag for pass interference was thrown by an official after some contact between Gilmore and the receiver.

Then, two plays later, an almost identical set of circumstances occurred, resulting in another pass interference penalty on Gilmore. Marshall head coach Doc Holiday was livid after the second flag was thrown on his junior corner, triggering another 15-yard penalty.

Regardless of whether or not the flags should have been thrown, cornerbacks are taught to have a short memory. The ability to put a bad play behind them is a key trait for any good corner.

With the ball at the Marshall 19-yard line, the Mountaineers were in position to take the lead into the half or at least tie it up with a field goal.

However, on third-and-9 with 54 seconds remaining in the second quarter, Gilmore jumped an out route and intercepted the Thomas pass, earning redemption from his two penalties and sealing the Herd’s lead heading into the half.

It was a great singular play, but his impact did not stop there. On the Mountaineers first three drives of the second half, all three drive ending plays were made by Gilmore.

On the first drive of the second half, he blanketed the receiver on a go route, thwarting the attempt at the back-shoulder completion.

On the second drive, he flew downhill and blew up a screen, wrapping up the tackler and laying the hit stick at the same time. Throughout the game, he tackled well, racking up seven total tackles and four solo.

On the third drive, again covering the Mountaineers top wide out, he was all over the slant, breaking up another pass.

He was targeted twelve times by Appalachian State; he gave up three receptions but broke up three passes, intercepted one and defended all other targets well.