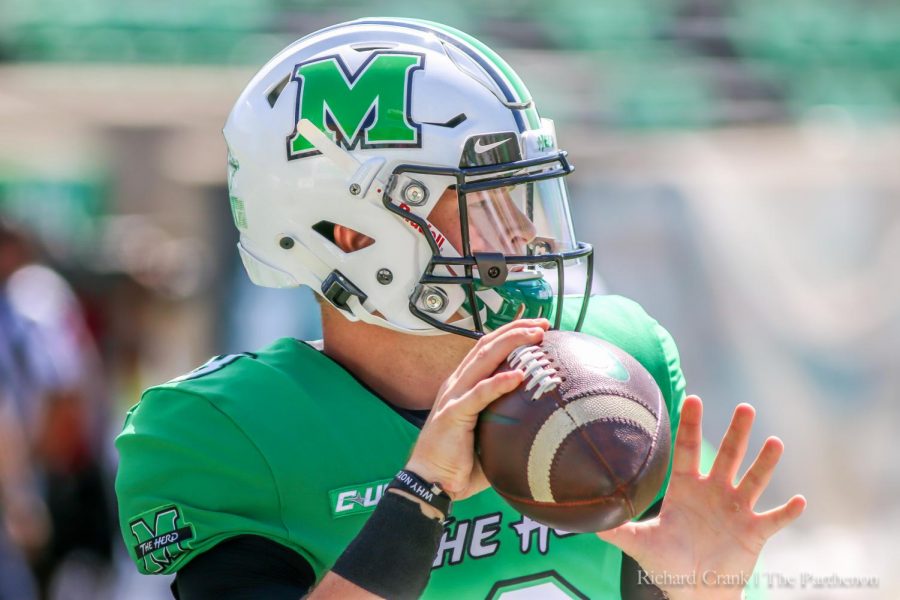 In one of the greatest debuts for a Marshall quarterback in the school’s history, redshirt freshman Grant Wells led Marshall to a 59-0 victory over Eastern Kentucky University behind four first half touchdown tosses.

Scoring a touchdown on the first four drives, Wells quickly helped put the Herd up by four TDs. Three of those four TD drives were capped off by a Wells TD pass, each time to a different receiver.

His first career TD pass came on the game’s opening drive, a 22-yard strike to tight end Xavier Gaines on a post route. The ball was placed perfectly toward the middle of the field where only Gaines could make a play on the ball.

Two drives later, throwing off his back foot, he hit slot receiver Talik Keaton on a corner route for a 21-yard TD. The crashing field corner in zone coverage was breaking fast to the ball, but he was just able to beat him over the top.

At that point of the game, Wells had a perfect competition percentage. It would not be until his ninth attempt that he would have an incompletion, which was actually a drop rather than an erroneous throw.

Although he was no longer perfect, Wells still found the endzone for a third time on a two-yard TD pass to tight end Garett Morell on fourth and goal.

After settling for a field goal on the fifth drive of the game, he needed only one play to get back to the endzone on the sixth drive. Nebraska graduate transfer wide receiver Jaron Woodyard got the behind the defense on a post, and Wells hit him in stride in the endzone for his fourth TD pass of the game.

Adding 27 yards on three completions, he played one drive in the second half, leading the Herd on yet another TD drive.

Afterward, he stood on the sidelined and watched redshirt junior Luke Zban run the second team offense for the rest of the game.

Focusing on less obvious aspects of Wells’ performance, he completed a pass to eight different receivers, and in a limited sample size, he exhibited his ability to run the ball either by design or by improvisation.

Lastly, it was a historic performance for Wells in many aspects. He amassed the most passing yards in a debut for a quarterback in Marshall history, and he was the first West Virginia resident to start at quarterback since 1995.