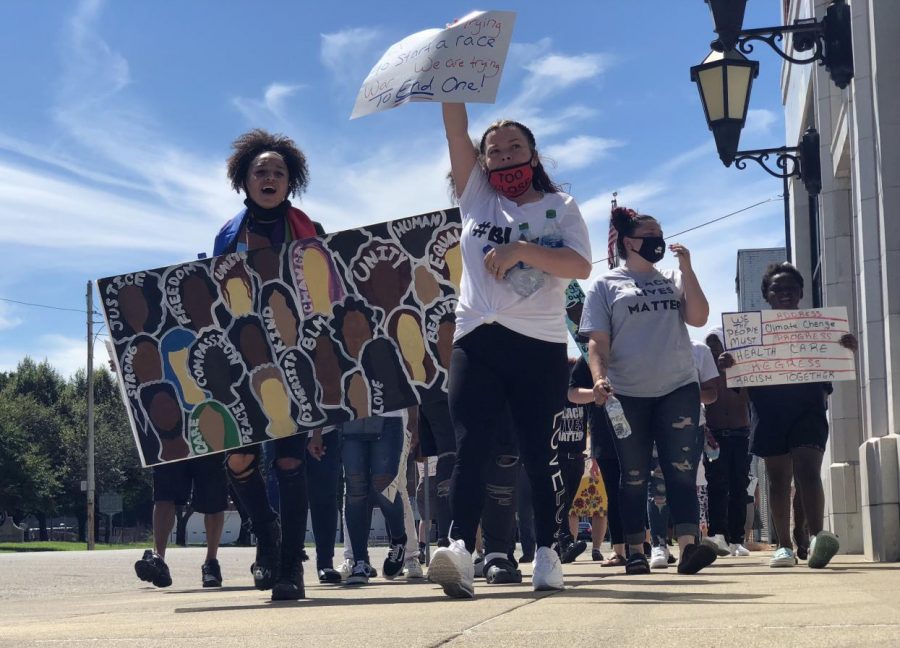 Dozens of protestors marched through Huntington Sunday—stopping to demonstrate at the Huntington Police Department—outraged by the viral video of a recent incident showing police officers in Kenosha, Wisconsin firing seven gunshots into the back of Jacob Blake, a 29-year-old black man who was leaning into a car occupied by his three children.

Blake, who was shot by Kenosha Police Department Officer Rusten Sheskey while trying to break up a fight, has been left paralyzed from the waist down as a result of the shooting.

According to Mapping Police Violence, police in the U.S. have killed nearly 800 people in 2020, as of Sunday. For the entire year thus far, there have been just twelve days when police have not killed at least one person in America.

Data also show that black people in the U.S. are about three times as likely as white people to be killed by the police.

Moe said it is unacceptable that black people must fear for their lives at the hands of public employees and institutions which are funded through taxation of the American people.

“Now, why in the world should we have to be scared of these people who we pay?,” Moe said. “Their money comes out of our pockets—our money. We work for it; We earn it. And you’re going to stand there and shoot me in the back? Shoot my granddaughter in the back? My grandson? This is not what I want my daughters to go through.”

Moe said protests and marches are important because they offer regular people the chance to make necessary changes to their lives and to society as a whole.

“There’s power in numbers,” Moe said. “That’s why we’re out here coming together and letting our voices be heard. We are making a difference. We might not see it today, and we might not see it tomorrow, but I promise you—our kids see it. They know it.”

Aaron Llewellyn, a local community organizer who attended the protest, said he and others chose to demonstrate because issues of racial injustice, specifically in policing, are prevalent in Huntington as in the rest of the country.

“We’re out here because we looked at the documentation, and it’s very clear that there is systemic anti-black racism in the Huntington Police Department and in West Virginia at large,” Llewellyn said. “Being black in West Virginia means you’re four times more likely to be incarcerated. Interacting with HPD, people of color are far more likely to experience a use-of-force incident, according to HPD annual reports.”

Llewellyn also noted that the City of Huntington spends thousands of dollars each year on settlements and lawsuits related to police misconduct. He said the city should further develop other options to be utilized in place of policing.

“We know the city has tried alternatives to policing, such as the quick response team and some other approaches, and we want to see those expanded so the police are taken out of situations in which other professional would be more fit to respond,” he said.

Del. Sean Hornbuckle (D – Cabell, 16), who attended the protest, said there are a lot of people in Huntington and across the country who are demanding change.

“I came out here today to support Huntington,” Hornbuckle said. “There are a lot of people in Huntington who are wanting change—black folks, white folks, yellow folks, red folks—a lot of good people from different backgrounds who understand there is a real issue growing here in this country. We can’t have these issues in our city. These people are passionate. We want change in our country, but we also want it right here in Huntington.”

Hornbuckle said the protests and demonstrations across the country as well as in Huntington also serve the larger purpose of getting more every-day people and young people involved in politics.

“This is about getting regular, good people involved in the fabric of our government,” Hornbuckle said. “A lot of people feel like they can’t even go out and try to make change because there is no hope anymore. For so long we have had actors masquerading as good officials and good politicians who are actually part of the problem.”

Hornbuckle said regular people uniting to put public pressure on elected officials and others in positions of power is crucial to the political process.

“If you call your mayor’s office, your city council office, your legislators, your congressman—you blow up their phones, and you show up and make your voices known, then slowly but surely, hopefully, they will change—or they will be forced to,” he said.