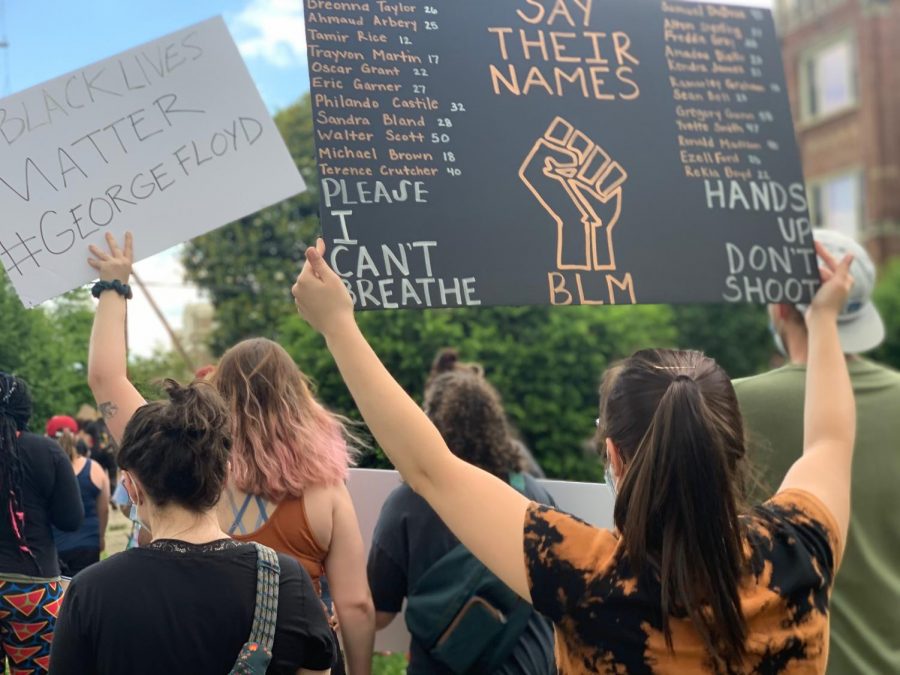 Hundreds of protestors marched the streets of Huntington Saturday to raise awareness about police brutality and systemic racism amid nationwide demonstrations in the wake of the murder of George Floyd by Minneapolis police officer Derek Chauvin.

“Within the police departments themselves, there are some thugs and some gangsters. The police know who the gangsters in their forces are,” Rev. Matthew J. Watts, one of the protestors, said. “When that officer was kneeling on the neck of George Floyd, and he was screaming for his dead mother and yelling that he couldn’t breathe, [the other officers] were standing there with their arms crossed, knowing they were being filmed. They knew they were invincible. They knew that officer was a thug.”

Watts said police officers too often are able to act recklessly and violently, knowing they will not be held accountable for their actions because any investigations into the matters are conducted by other police officers.

“The officer who killed George Floyd has been wreaking havoc for years, and he always got a pass,” Watts said. “They’re protected by that blue code. We have to police the police ourselves.”

Chauvin, the officer who kneeled on the neck of Floyd for nearly ten minutes and for nearly two minutes after learning Floyd no longer had a pulse, had been the subject of 18 prior citizen complaints filed against his police department, including one instance when he shot Leroy Martinez, a 23-year-old Alaska Native. He never was prosecuted for his use of excessive force.

Watts said a potential solution to the rampant police brutality and lack of accountability for law enforcement is the implementation of citizen review boards to investigate complaints filed against police departments.

“We need to have citizen review boards. We should demand that we have them. These people work for us,” Watts said. “What I have found in my years is that anytime there’s a government institution, and the public is not privy to it, it goes off the rails. These people become gods. Unchecked power is inherently corrupting.”

Tosha Hairston, a Marshall University alumnus, said she and her cousin Erica attended the protest because they wanted to stand up for their children. They each have two black sons.

Hairston said she has custody of her younger brother, who was threatened and injured by a police officer during an incident at Huntington High School a few years ago.

“There was an incident at Huntington High where he ended up hitting the principal, and we have a video of the cops holding him down on the ground, and when I got to the school, they had him handcuffed and had left marks on his neck, and that was all just so hard,” Hairston said. “It was hard to see him like that.”

Hairston said her brother was handcuffed with his hands behind his back when the police officer threatened him with more violence while holding his forearm onto her brother’s neck. Her brother was 17-years-old at the time of the incident.

Hairston encouraged other parents to imagine if their child was put in the situation of her brother or of someone like George Floyd in Minneapolis at the hand of a law enforcement officer.

“Imagine your child being held down on the ground yelling and asking for help and screaming, ‘I can’t breathe’ repeatedly. How would you feel? The color of your skin shouldn’t matter,” she said. “Put yourself in our shoes and think about what if it happened to you or your kid—how would you feel if you lost your kid to something like that?”

Hairston said while there is an evident systemic racism problem in America and among police forces, there is also a significant issue of unchecked authority.

“It’s also an authority problem,” she said. “In so many cases, police are abusing their authority in the worst ways.”

Erica Harmon, another of the protestors Saturday, said there is a misconception among West Virginians that racism and police brutality are not as prominent in the state as in other places throughout the country.

Harmon said her son has experienced issues with racism and police officers abusing authority in Huntington.

“He has been called the n-word playing middle school sports,” she said. “He got pulled over while driving just a couple weeks ago, and the cop said he had a taillight out. There was no taillight out. It’s because he was black, just driving down Route 60.”

Harmon said the issue of systemic racism, particularly in law enforcement, is evident through comparing the ways police officers treat white people versus how they treat black people when they have clearly committed a crime.

“It’s like when that white guy (Dylann Roof) shot up the black church in (Charleston) South Carolina, and he gets walked out calmly in handcuffs,” Harmon said. “If a black guy does that, he doesn’t walk out at all. And it’s sad. We just want to be treated like everyone else.”

Harmon, who has lived in West Virginia her entire life, said she also has experienced racism in her daily life in Huntington.

“We aren’t treated the same ways you’re treated,” she said. “When I walk into the grocery story, I get followed. I don’t bring my purse or nothing, and I still get followed. You walk into the store right behind me, and they don’t think twice about you. That’s because of the color of my skin, and that’s not okay at all.”

Malaya Gunn, a 16-year-old student at Huntington High School, said she and her family members have had several traumatizing experiences with police officers, including one incident which caused her to “fear for [her] life.”

“My heart aches for my brothers and sisters,” Gunn said. “We are losing them every day because of police brutality and racism and hate. I wanted to be here, and I brought my momma, and my sisters and my friends and family along to help support everyone here and the rest of our community, because it could be me next, or it could be someone I love. It could be my brother or my sister or my friend. It could be any of us.”

Gunn encouraged those outraged by the killing of Floyd and other instances of police brutality and systemic racism to become more politically active in their communities.

“Come protest. Stand with us,” Gunn said. “If you stay at home and do nothing—if you’re silent—you’re on the side of the people oppressing us. Come love with us. Come educate with us. I want nothing but peace and love and hope. But for us to have peace, we need justice; when we have justice, we’ll have peace.”

Del. Sean Hornbuckle (D – Cabell, 16) also attended the protest. During a Facebook livestream earlier this week, Hornbuckle addressed many of the issues that were highlighted during the protest and at similar protests that have occurred across the country since the murder of Floyd.

“These recent incidents occurring in our country highlight decades of frustration, pain, hurt, anger, confusion, mental health issues, systemic racism and all of the above,” Hornbuckle said. “Right now, we are amongst maybe the biggest battles we will see in our lifetimes. We have to really bear down and start addressing inequalities and systemic racism and oppression. People are hurt. We’ve got to genuinely do something about it. We have to take action. We have to have a plan. We can’t take this anymore.”

Hornbuckle said it is unacceptable for politicians and other political and community leaders to offer hollow words and condolences in the wake of tragic incidents such as the ones in Minneapolis. He said in his six years working in the state legislature, he has been shocked at the ways politicians of both parties avoid addressing issues such as systemic racism.

“We’ve head debates on women’s healthcare, different types of gun issues, tort law, we have moved Heaven and Earth for universities, hospitals, different businesses and the coal industry. We’ve done everything,” Hornbuckle said. “Sometimes I’ve agreed with those stances, and sometimes I’ve disagreed. I’ve debated, and I’ve been an advocate. but the common thing is that we never ever debate or even bring up the issue of systemic racism. It doesn’t get touched. It doesn’t get talked about. Every single issue, we debate and we vote up or we vote down. But this one issue, Democrats and Republicans both don’t want to touch it. That is purely unacceptable.”

Hornbuckle called on his colleagues working in state government to take action.