Marshall alumni: Where are we now? 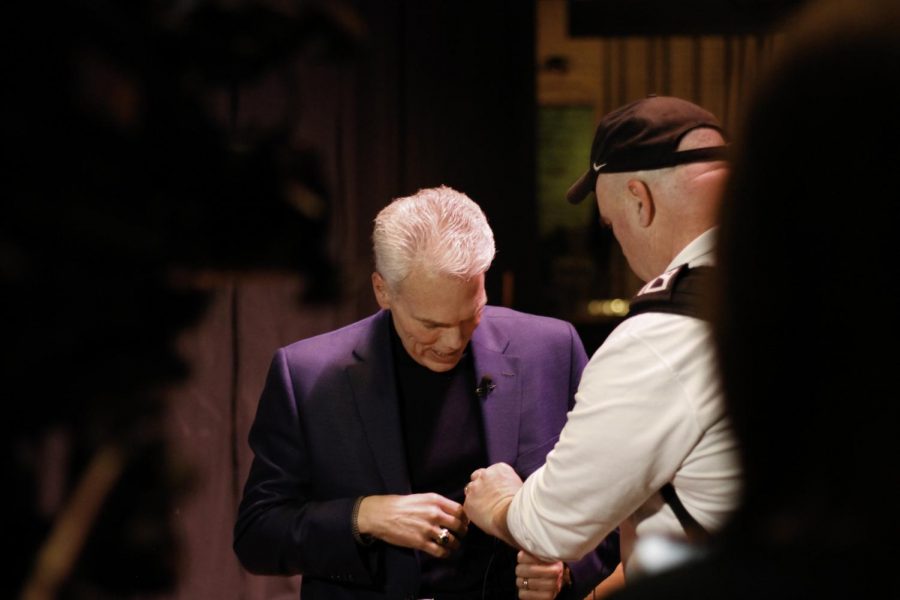 Brad D. Smith preparing for the CEO Panel on Feb. 19.

Editor’s note: There were two corrections made to the story below after April 22 publication due to reporter error.

Pepsi or The Herald-Dispatch?

This was the question Marshall University alumnus Brad D. Smith faced upon graduation in 1986.

While Smith studied business administration focusing in marketing, he had always dreamed of being a journalist or a marine biologist.

“Coming out of Marshall, I had two job offers,” Smith said. “One was The Herald-Dispatch and the other was Pepsi. I went home to see my dad. I was unsure how I was ever going to make my decision because one was tugging at my heart, journalism. And the other one was this really good company.”

Smith said his dad gave him three pieces of advice to help him make the decision.

“The first is to choose the one that makes your heart beat the fastest,” he said. “The second is to choose the company that will surround you with people smarter than you, which will make you work extra hard just to keep up. And the third is to make sure you make enough money to be able to pay your bills, but don’t take the one with the highest pay, just know that you have to pay your bills.”

Journalism was Smith’s first thought, but he said growing up he had taught karate and part of the grade was how well his students did, which made him realize a valuable trait in himself.

“I got more excited about watching my students advance than I did about me getting my own belt,” Smith said. “It made me step back and say, ‘Maybe I like people management.’ And Pepsi was hiring me to put me in a people management program, where Herald-Dispatch was hiring me to write. And I fell in love with working at an environment where I got to bring the best out of other people, so I took Pepsi, and that’s how I made my choice.”

Smith was in the soft drink industry for seven years before moving on to directional marketing for four years. He then moved to a technology company where he worked marketing and general management and where his career took another turn.

“I was asked to launch the first internet payroll product during the .com boom in the 90s,” Smith said. “That launched me into technology, and in the last 17 years, I joined Intuit. I ran our three biggest businesses as a general manager and then became the CEO and was the CEO for 11 years, and I’ve been the chairman of the board since 2016.”

Smith said he never dreamed he would be the head of such a well-known company.

While Smith has become an inspiration to many, he said the real inspiration for him is the underdog.

“One of my favorite quotes is, ‘It’s often the people that no one expects anything of that does the things that no one would have expected,’” Smith said. “The people that inspire me are the people every day that make this world a better place and they may not be getting their just due. And I like to be a champion and I like to work with those people. The everyday man and woman inspire me because they’re the ones that make it happen.”

Smith said some of his proudest career moments includes seeing others succeed.

“The day I stepped down and saw my successor shine and take the company to a whole new level,” Smith said. “I knew I had done my job. I had left it better than I found it and I had found someone better than me to lead it into the next chapter. I love to see someone excel.”

Growing up in Kenova, Smith said he does not forget the impact West Virginia has had on his life. He credits this to his ongoing efforts to give back to the state.

“Anything I have ever achieved in life is because someone in West Virginia invested in me,” Smith said. “And honestly, they believed in me more than I believed in myself. So, they gave me a reason to dream, and I will never forget that.”

Smith said he sees and has experienced the struggle West Virginians and women face based on stereotypes.

“I see there’s an uneven playing field for women. No matter how much anybody wants to talk about it, women really have to break through the glass ceiling,” Smith said. “The same thing with West Virginians. When people hear us, they have these stereotypes.

“I got sent to New York in 1986 to get rid of my accent because my boss said it made me sound uneducated. I hold that door because I want every West Virginian to believe that they can do anything they want and if I have to kick that damn glass ceiling in, I will and that’s why I do it.”

When it comes to giving back to the community, Smith is well-known. Most recently, Smith and his wife, Alys Smith, made a $25 million donation to Marshall’s Lewis College of Business.

Smith encouraged all alumni to give back when they are able. He said giving back is being an example for the next generation.

“Many times we are our own greatest critics and we think, well I’m not good enough, I could never do that, I could never go to the Silicon Valley, or I could never be whatever, a CEO or on Broadway or any of the other things our alumni have done,” Smith said. “It’s important for people to see themselves in us.”

Smith said it is important for students to see alumni and know they grew up in the same area, facing some of the same struggles. They had the same classes and some of the same professors. This shows them that it is possible to dream big.

“The second reason for paying back is to remember anything we ever accomplished is because somebody there gave to us first without any guarantee that we would ever come back. They gave out of the goodness of their heart. It’s our obligation to give back to them.”

Smith said he gives a great deal of credit to the university and how Marshall helped prepare him for his career.

“And I’ve always answered it with this response, ‘I’ve learned that our education is exactly the same, there were only two things that made what you learned and I learned different.

One is yours cost $150,000 more than mine, and the second is my football team kicked your ass every Saturday on the football field.’ Anyone who believes that Marshall has an inferior program is wrong.”

When asked what advice he would give to students graduating or anyone starting their career or starting over, Smith again shared words from his dad.

“Volunteer for the job no one else wants,” Smith said. “Everyone wants to be a show pony, but there’s always stuff that a company or a university or a newspaper needs to get done and it’s not the glorious work. But if you raise your hand to do that, your bosses are going to start to look at you and say this is the person that’s always willing to do whatever’s needed. One day one of these great jobs are going to come along and they’re going to remember all of the sacrifices you made for the team, and they’re going to give you a shot for the great job.”

Smith said this advice is how he believes he made it to CEO. He volunteered for all of the jobs that no one wanted.

Smith’s future plans are to bring some of the success from the Silicon Valley to West Virginia. He said his goals are to level the playing field of opportunity for West Virginia by showcasing the talent in the state and bringing investors in for startups.

“My heart never left,” Smith said. “My Linkedin profile says, ‘I was a boy from a small hometown who spent 22 years looking for a way out and every day since looking for a way home.’ I’m doing it by just trying to bring back and come back as much as I can.”