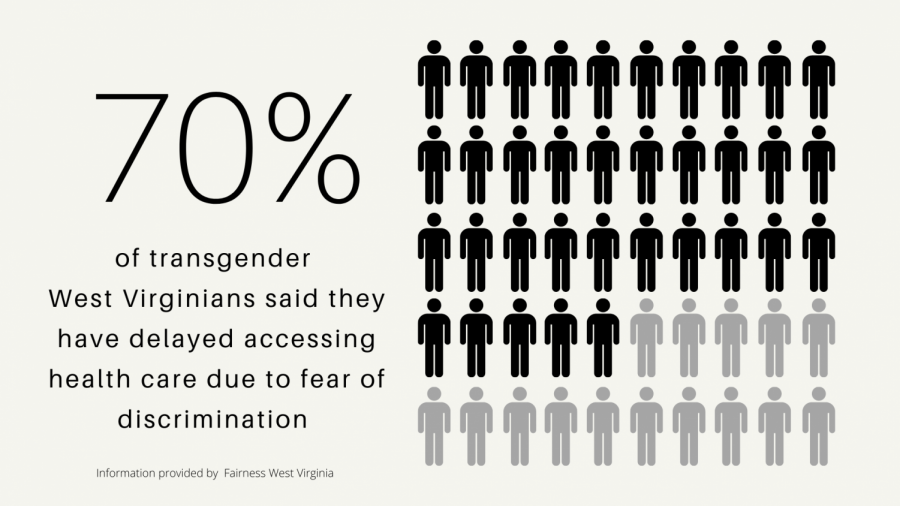 Despite facing obstacles during the beginning of her transition, Natasha Stone, the transgender visibility coordinator for Fairness West Virginia, a statewide civil rights advocacy organization dedicated to the equal treatment of LGBTQ West Virginians, was able to find her way to medical resources, even if it meant chipping in while creating those resources.

While the state historically has been bombarded with various health issues over the past decades, the condition of West Virginia’s transgender health care system, or the lack thereof, may be one of the next issues the state must face.

The collected data set a baseline of insight centered around the experiences that trans West Virginians may face when navigating the state’s health care system. Stone said that among the topics researched were experiences of discrimination, necessary travel to receive care and the impact of medical costs.

According to Rebecca Denning, a board-certified child and adolescent psychologist, instances of transgender discrimination may be connected to a general misunderstanding of gender-nonconforming individuals.

“Historically, training in culturally competent care has not been a standard in many healthcare programs,” Denning said. “We know this adversely impacts care for people of diverse backgrounds.”

For Evan Wiseman, a 21-year-old trans man from Parkersburg, West Virginia, the journey to transition brought on many of those obstacles due to a lack of resources and general understanding about transgender individuals.

“Starting in 2014, my parents, eldest sister and I searched all throughout the state looking for hormone therapy before I eventually started,” Wiseman said. “We looked everywhere but eventually accepted the fact that I would have to travel to Cleveland Clinic. All of the primary physicians in Parkersburg weren’t interested in helping me.”

In addition to a lack of resources, Wiseman said trans West Virginians may also travel extended distances in order to receive educated, understanding care from medical professionals who are knowledgeable on how to interact with transgender individuals.

In Wiseman’s experience, he said any time he’s received care from an emergency room, he has been treated “extremely poorly.”

“(Doctors) in the ER will use she/her pronouns because my gender is not legally changed and they’ll ask for my dead name even though I list my preferred name,” Wiseman said. “Often times male doctors won’t even look me in the eyes and will say the bare minimum to me.”

While recently receiving care for kidney stones at Ruby Memorial Hospital in Morgantown, West Virginia, Wiseman said he felt “violated and not cared for” after receiving care from one of the physicians.

“I had a doctor who was using a scope for a vaginal procedure and, before telling me what was going on, he started the procedure,” Wiseman said. “When I made a sound because of the pain, he told his nurses to restrain me and told me to be quiet because it’s ‘not that bad.’”

While medical professionals may not understand how their actions can be harmful, Denning said unfavorable medical experiences can have traumatizing effects of trans patients.

“We know that when transgender patients encounter messages that their identity and gender expression are a problem, they are at a significantly increased risk for a range of poor health outcomes,” Denning said. “These experiences actively cause harm.”

Even still, outside of obstacles created by a lack of cultural differences and a general lack of understanding, trans individuals may still come into contact with barriers that prevent them from receiving the care that Wiseman deems “life threatening.”

Once Wiseman decided to look into top surgery, a medical procedure which removes breast tissue to produce a masculine appearance, he said that finding the one — and only — trans educated surgeon in the state was not hard, but trying to get the procedure covered by insurance was difficult.

In order for Wiseman to eventually receive the procedure, he and his family had to pay $7,000 out of pocket.

According to Stone, in contrast to Wiseman, the cost of medical care can be debilitating to West Virginians, but can be particularly troublesome for LGBTQ citizens who historically have been shown to live in poverty.

“In West Virginia we have challenges with healthcare overall, with many West Virginians struggling with access to healthcare,” Denning said. “When you consider that some portion of that workforce is not able to provide gender affirming care, it’s easy to see that accessibility is a significant barrier to care.”

Joelle Gates can be contacted at [email protected]