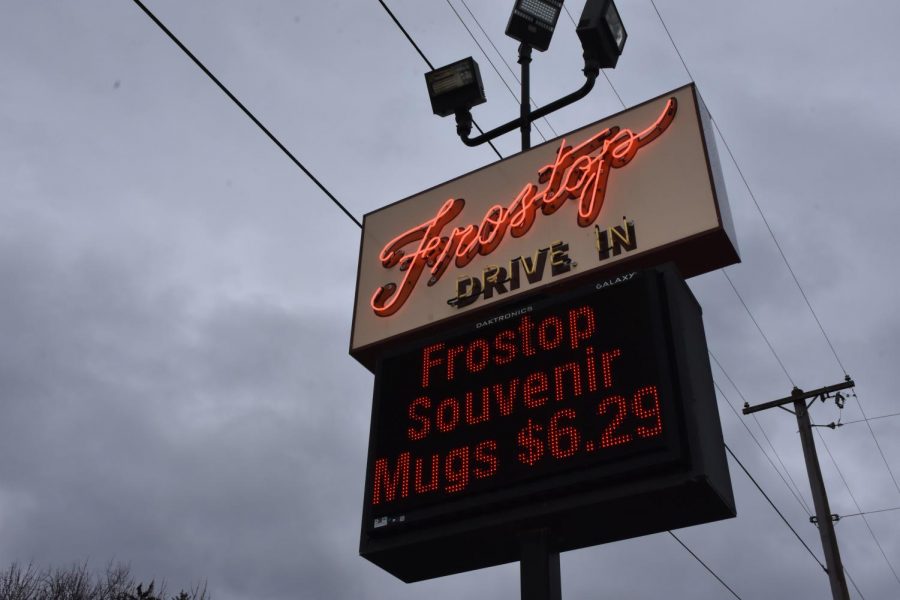 In a city inundated with a hankering for hotdogs, Frostop Drive-In’s franks are a force to be reckoned with, according to locals.

Frostop Drive-In in Huntington, West Virginia is one of seven major hot dog specific food establishments in the city of roughly 47,000 people, and one of 13 Frostop Drive-Ins left in the country. Its competitors in Huntington include the exclusive Hillbilly Hot Dogs, Stewart’s Original Hot Dogs, Midway Drive-In, Charlie Graingers, Sam’s Hot Dogs and Farley’s Famous Hot Dogs. With much to compete with, Huntington’s Frostop separates itself from the crowd through its unwavering positive customer service and traditional hospitality, according to long time employee Kimberly Smith.

After working at Frostop for 11 years, this hotdog veteran has narrowed it down to nostalgia. Nostalgia is what keeps people coming back, according to Smith. She said she enjoys being someone who gets to be personable with her customers and make them feel welcome.

The first ever Frostop was established in Springfield, Ohio in 1926 by a man named L.S. Harvey. He wanted to serve millions of customers with a classic burger-stand menu but had one particular product he was confident would reign supreme over his competitors of the time; root beer.

Frostop serves the “tastiest and creamiest root beer in all of America,” according to their website. By using a root beer recipe that infuses 22 flavors and cold-brewing small batches at thirty-six degrees, Frostop claims to create the rich, delicious flavor that is not replicable by any of its competitors.

Beyond the root beer, there is the hot dog, a delicacy in West Virginia.

The Mountain State is no stranger to a delectable ‘dog. Whether or not one calls it chili or sauce, ordering a true Appalachian hot dog is not an issue at Frostop, according to patron Sylvia Carr. Carr said she has been visiting Huntington’s Frostop since she was a little girl. She grew up in Huntington but said she now commutes from Kentucky to acquire her nostalgic meal.

Frostop’s famous 14-foot spinning mug has been a staple to the name since 1959 when the drive-in opened, but it has had to undergo a bout of repairs in recent years.

After being repaired once, the mug again began slowing its spin in the summer of 2019.

“(The owners) decided to take it out, redo the insides and now it is getting all painted up,” Smith said. “Right now, it’s currently getting a facelift. It’s in the mug hospital.”

Frostop commissioned the help of machinists at Wooten’s Machine Co. located in Huntington. Smith said she is unsure of the estimated return date of the mug.

The legend of Frostop has been building for 64 years, providing families with a wholesome, traditional eatery year after year.

“It has a lot of history because it has been here so long, since I was born and we’ve just always been raised coming here, so it has more of a meaning,” 32-year-old Kristen Metzler said. “A sentimental meaning…I even have memories with my family here (at Frostop) as well.”