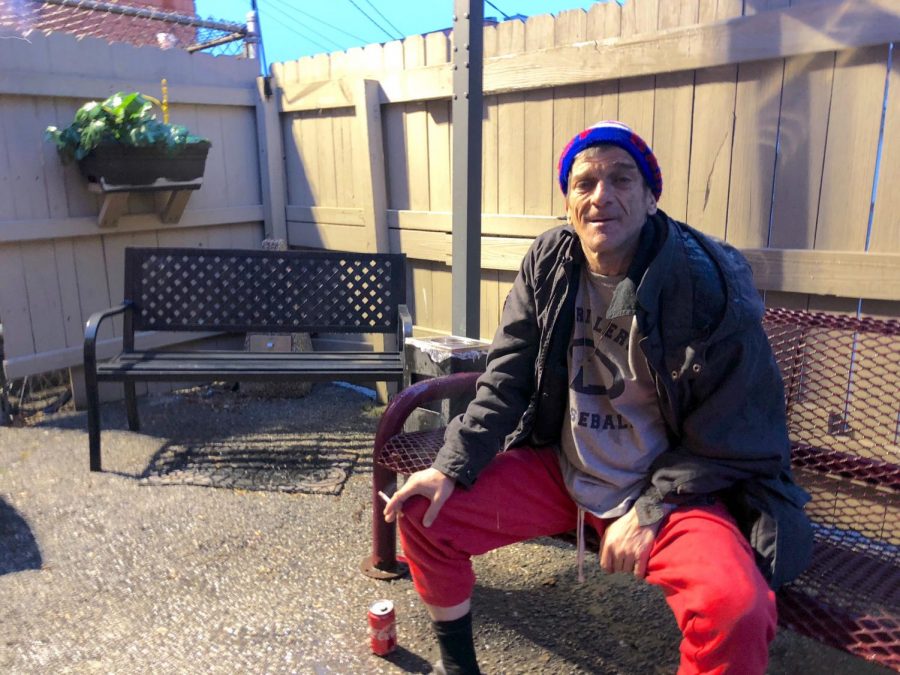 J.R. has been homeless for two months and traveled to Huntington for the first time last week.

Wayne Glover Jr., or J.R., is 52 years old and was born in Indianapolis, Indiana, and he has been homeless in Huntington for about one week.

Glover said he has been homeless for the past two months, but he only arrived in Huntington with his mother last week. He said he also was homeless for three years after running away from an abusive family when he was 15 years old.

During part of those three years, Glover said he traveled to 42 states in about a year-and-a-half.

“I made it to almost every state,” he said. “I didn’t know where I was going; I just couldn’t go back to that place.”

Glover said last week he traveled to Indianapolis from Denver, Colorado, where he was recently living, and then to Huntington with his mother via Greyhound buses.

He said he and his mother had only been in Huntington for a couple days when she was killed by a drunk driver and that later the same day, his cell phone and wallet were stolen from him.

“I miss her so much,” Glover said. “Now I’m homeless; I’m stuck here, but people are helping me out.”

Although he has only been in Huntington for about a week, Glover said the people he has met so far have been  kind to him. He said despite recent misfortunes in his life, he maintains an unwavering faith in God and feels he has much to be thankful for.

“I’m so grateful for what I have,” he said. “People here feed me, share with me, give me shelter and clothes; they are a blessing. This is a good place to be when you’re homeless.”

Glover said he has spent much of his first week in Huntington at the Huntington City Mission.

With his mother gone, Glover said he feels he has “no reason” to return to Indianapolis and “nowhere else to go,” so, at least for now, he plans to continue living in Huntington.

“I’m going to stay here,” he said. “I’m going to live in Huntington. I like it here; I feel comfortable, and I feel safe.”

Glover said that while living in Denver, he worked for longer than a decade as a catering supervisor at an airport.

“I love cooking,” he said. “I was a catering supervisor in Denver for 12 years, and I loved that job. I miss it because I don’t have a kitchen now. I would go back and do it today if I could.”

Glover said on holidays, he used to cook meals for everyone in the apartment complex he lived in. He said he enjoys cooking all types of food, but ribs may be his favorite to eat.

Glover said if he ever becomes rich, he will donate much of his wealth to others in need.

“We should donate empty houses to the homeless; we have enough houses,” he said. “If I was rich, I would do all I could to help the poor and the homeless. I would share my money with them.”

He said he wonders what inspires some people with substantial wealth to be greedy.

“Why be greedy?” Glover said. “We’re all living here together, and we all have to die, too. Why not share with each other?”

Glover said people should try to learn to take nothing for granted because so many people in the world have so little to hold onto.

“Some people are so greedy that they take things for granted that some people can only wish for,” he said. “It’s a shame how greedy the world has become.”

Glover said as he gets older, he realizes more and more that life is “crazy” and unpredictable, and the best way to live is to always show kindness and learn from past mistakes.

“There’s so much chaos going on in this world,” he said. “And I think most people don’t really know how to handle it.”

Glover said he suffers from various health-related conditions himself, but he has been unable to access significant information about the coronavirus pandemic.

“I don’t know a damn thing about the virus,” he said. “I haven’t had access to radio or TV for months, so I haven’t heard anything about it.”

Glover said he has bone cancer and throat cancer. He said he maintains faith that “everything will be okay.”

“The (throat) cancer is stage three, but I’m not ready to give up yet,” he said. “I’m a fighter. I’ve been living through hell my whole life.”