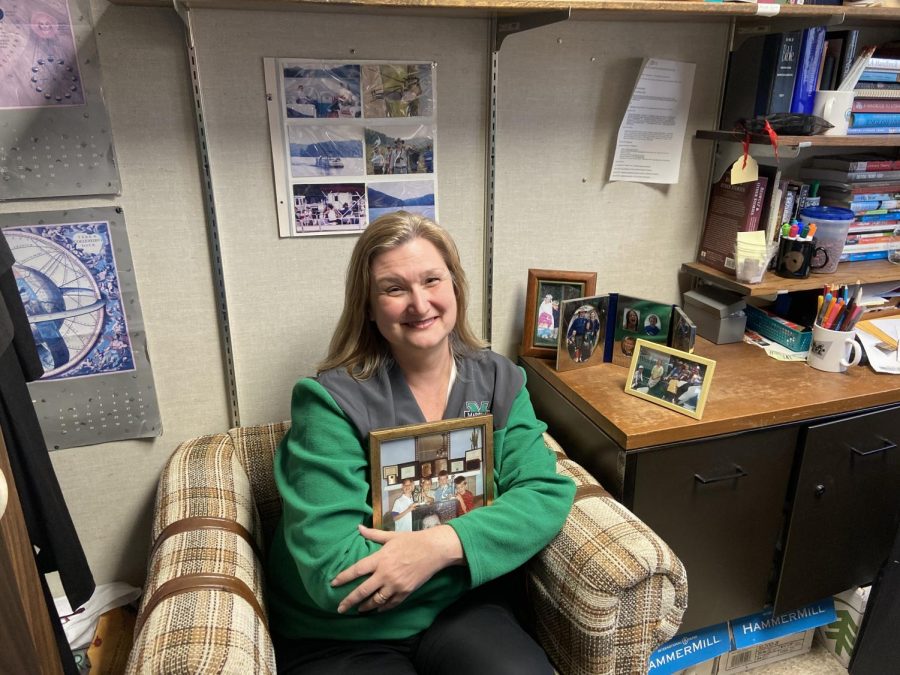 When Kateryna Schray had her first child in September 2000 on a Thursday, she was back on campus the following Tuesday—though looking back she calls that a “huge mistake.”

“I would not recommend that for anybody,” Schray said. “And actually, since then, we’ve figured out better ways to support people who are becoming parents on campus.”

An English professor at Marshall University as well as interim director of the Office of Student Success, Schray now has four children, all born during her time at Marshall. The experience for professors with children has changed significantly in the past two decades, Schray said.

“When I had my first child, as far as I know, no one in our department had a baby in 20 years,” she said. “It wasn’t just new for me, it was new for my department. So, yes, things have changed. Part of it is, I think, that having a baby is no longer seen as some huge threat to your career.”

Without the support of her colleagues, Schray said, she wouldn’t have been able to thrive as well at work after having children. After the birth of her first child, one coworker gifted Schray a “nursing chair,” which she still has in her office. It made the process of nursing easier and more comfortable for her, she said.

“There’s also pumping too, and right around the time that I had a baby, one of my students, I discovered, had a baby and she needed a place to pump,” Schray said. “She was going to the bathroom. So I gave her a key to my office, because this is actually a perfect chair for that. Now we have rooms for that, which is great. We’ve come such a long way.”

As her family grew, she and her husband figured out unconventional ways to balance their workload and childcare duties. While in her Corbly Hall fourth floor office, Schray said if she heard the honking of their Euro Van, she would know that meant her husband was there with the kids.

“I would get up, make sure it’s him in the van and I would go down there,” Schray said. “By then it was either one, two and then eventually three kids kicking the soccer ball behind the building back and forth, which is great because now my daughter’s a soccer player here at Marshall…it’s cute that she grew up there.” w

Ever since she began teaching at Marshall in 1996, Schray has made an effort to accommodate parenting students. She has a parenting clause in all of her syllabi that states if students are caring for children or incapacitated loved ones, to let her know. If they do, she then has a separate policy for them, Schray said.

“It basically assures them that it’s okay to turn things in late,” she said. “I don’t want them to have to call me at three in the morning asking for an extension because they have a sick kid, and you never want to put somebody in a position of taking care of their sick child or writing a homework assignment. So I always had that, even before I was a parent.”

Schray said looking back on her teaching career, including the parenting clause is one of the things she’s most happy and proud about.

“I’m always surprised with how grateful students are for it because it’s kind of a basic human right. And I understand there are times you still have to get your work done. It’s not about lowering standards, it’s about being creative in solving problems and enabling people to succeed. And that includes mothers, but also fathers,” Schray said.

The option of online instruction also benefits professors and students who are parents, Schray said.

“Today things are so much better in terms of how we’ve figured out ways to make it possible, and part of it too is like the technology has evolved,” she said. “We have online instruction now, and you could plan ahead. There’s different mechanisms in place for it not to be so crazy. With online courses, it’s possible to teach four weeks of your semester online, and then we meet up with the class again.”

As she works in the Office of Student Success, Schray said she wants to support students any way she can, including by creating parent friendly designations for classes. The idea, she said, is that some classes are skill driven as opposed to content driven.

“Your parenthood wouldn’t compete with your academic requirements,” Schray said. “They would, in fact, inform one another. And I think the situation for people who are parents who may feel like they have less in common with their classmates here, they’d be in a cohort of other people who are in equal situations.”

“How to communicate with your doctor, that’s a skill set in itself, how to be able to advocate for your child without looking like you’re overly paranoid about your child’s health,” she said. “For an English example, research papers on the best daycares in town, (assignments) that can actually reinforce and celebrate and acknowledge your parenting.”

Schray made the front page of The Parthenon with her newborn daughter and husband in the September 26, 2000 issue.

“It meant so much to me that everyone was celebrating and cheering me on; it was very sweet,” Schray said.