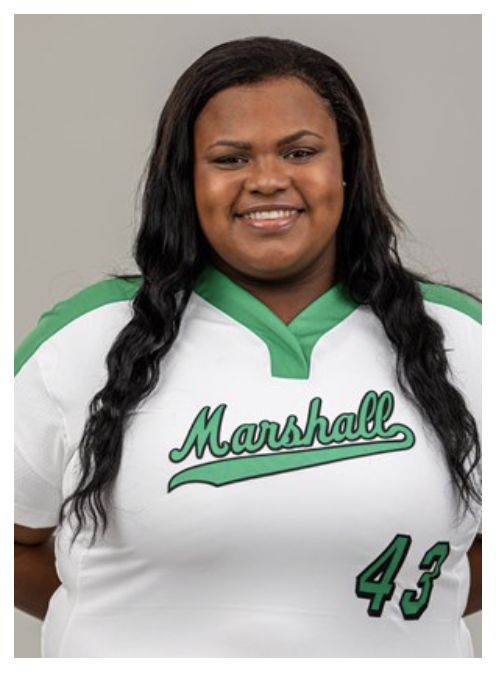 Athlete of the Week: Aly Harrell

RESULTS OVER THE LAST WEEK:

After her dominating performance over the five-game, three-day Chattanooga Challenge, junior Marshall University softball player Aly Harrell has earned athlete of the week. Harrell also earned Conference USA Player of the Week for her strong batting and fielding effort.

With a .714 batting average and slugging percentage of 1.500, Harrell had 10 hits, 11 runs batted in, two doubles and three home runs over the course of the five games. On the season, she has 13 hits and 12 RBI while also batting .650, all of which lead the team.

Contributing to her .778 on base percentage, she was walked three times and wasww hit by a pitch once, getting on base four extra times.

Defensively, from her first base position, Harrell had a perfect fielding percentage on 23 chances. 19 of those chances were putouts while the other four were assists.

No play over the weekend was as big as her grand slam against Tennessee Tech in the bottom of the sixth inning that extended the Marshall lead to 6-1. In that game, she went a perfect 4-for-4 at the plate.

However, her incredible week began prior to her performance against Tennessee Tech when the team took on Lipscomb. Although Marshall came up short of victory, she recorded her first home run of the weekend to go along with three RBI.

In the second game versus Chattanooga, she was much quieter, but she still added a hit to her overall weekend statistics.

The next game against Ohio was when her weekend really began to skyrocket. She hit a solo home run in the first inning, and in the bottom of the sixth, she hit an RBI double to give Marshall a 6-5 lead.

In the top of the seventh, she got the final putout of the game to give Marshall the victory. Over the next two games against Tennessee Tech and Indiana State, she compiled six hits and two runs.