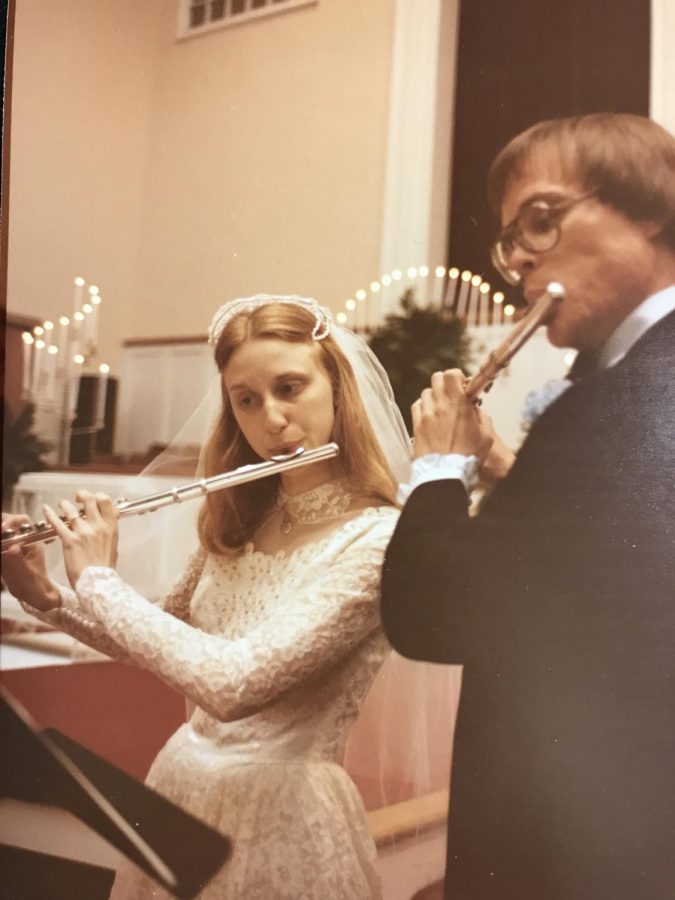 Ed Bingham never really wanted a cat, but his wife Ann had always wanted one. So, they compromised, and Ed bought her a cat. It was a Siamese kitten, or a “flea-infested furball,” as Ed said. Now, cats are a big part of their world. The couple have been breeding and showing Siamese cats for years, and they trap and spay or neuter stray cats.

When they’re not traveling the country attending cat shows, they work in Marshall University’s Music Department. The two professors are both woodwind instructors and enthusiasts. After being married for 40 years—with 30 of those years spent at Marshall—they reflected on their relationship, which began in an unconventional way, and what love means to them.

What was your first date?

Ed: “I had been dating one of her friends. And I was being inducted into Phi Kappa Phi. It was the initiation day, and my girlfriend couldn’t accompany me so she sent a sub. We had a really nice time. So, there’s a lesson for some maybe.”

Ed: “That would have to be this cat show this last weekend. We went to Pittsburg and then had a very nice dinner afterwards. (Looking at Ann) Was that a date?”
Ann: “Yeah, I guess so. A weekend-long date.”

How important is music in your relationship? Do you often perform together?

Ed: “We don’t play in public anymore because Ann’s got focal dystonia, which prevents her from playing. So as far as performing together, not anymore, but we share the same interests and go to concerts and talk about our students.”

Ann: “I don’t play in public anymore, but for many years I did.”

Ed: “Playing with your spouse is a brilliant test in your marriage.”
Ann: “That’s a good way to put it.”

Ed: “It’s really interesting because there are personal dynamics that go on. But then when you get into a musical situation, you’re having to collaborate musically, and there are decisions to be made. There has to be a different kind of relationship there…Though, we did find that a tuner and a metronome solve a lot of arguments.”

Do you have a song?

Ed: “Not really, although this is so coincidental. I was just driving in today, and there was a recording of the New York Philharmonic playing a piece by Aaron Copeland called ‘Quiet City.’ It’s for trumpet and English horn and orchestra. And the man who was playing English horn on that recording is Tom Stacey, and Ann had studied with him and has maintained a relationship with him. So maybe that might be a good song too because there’s some history with Aaron Copeland…The piece was originally written to include a chamber group instead of an orchestra with clarinet, saxophone, trumpet and piano. But he rescored it. It was kind of funny that that was on the radio. (Looking at Ann) I meant to tell you that. It sure sounds good. So, we’ll go with Aaron Copeland and ‘Quiet City.’”

How has Marshall impacted your relationship in a positive way?

Ed: “One thing, we’re very fortunate for both of us to have jobs in the same school. Many academic couples don’t have that luxury. So, we’ve been fortunate to be able to have a life together and even more so, being in the same department.

And the relationship is cemented because when I lock my keys in my office, I can ask her to let me in and vice versa, so I’m calling or giving the knock on the door, ‘Can you let me in my office?’”

Ann: “But the thing is, we are not together constantly. I mean, there will be days that we don’t even see each other except for lunch. We usually manage that, but not always.”

Ed: “Another thing, both of us being woodwind players, we collaborate on performances and teaching things, and all the things that go with the job. It’s a good thing we like each other most of the time.”

Do you have any advice for young couples?

Ann: “Don’t rush into anything, give it some time…I think just like any relationship, like between teachers and students, and friends, you can disagree with somebody as long as you respect them and that respect is probably the most important thing in the marriage.”

Ed: “That, and make sure you have enough cats.”

What does love mean to you?

Ed: “Well, it’s many things. It’s romantic love; it also extends deeper than that. You truly become part of another person. The ability to think together or anticipate what the other feels and wants. It’s that sense of romantic plus the deeper love. It truly is a merger of two together. (Looking at Ann) Is that the right answer, dear?”

Ann: “That’s a good answer. It also means knowing that no matter what happens, there’s going to be somebody there with you.”

What made you fall in love?