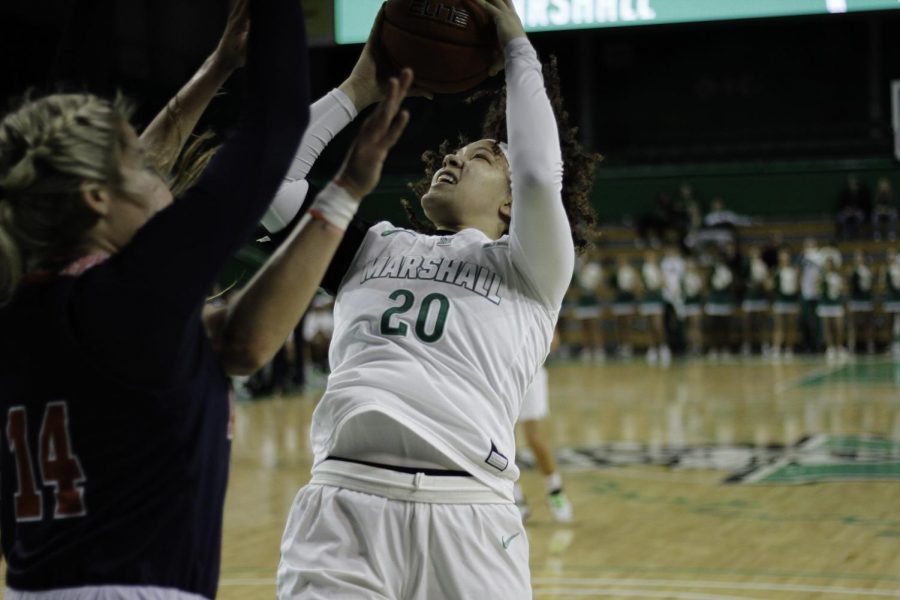 Junior Taylor Pearson put up a basket at the Cam Henderson Center.

“It was a good solid win,” Marshall Head Coach Tony Kemper said. “It wasn’t perfect, but it was good enough. We needed it. We’re moving in the right direction. I thought we really pressed in the first half. I thought we did a good job until the end. I thought we did a decent job on the glass. Good win … we’re working our way up and I can handle that.”

The Herd put four players in double figures. Savannah Wheeler and Taylor Pearson led the way with 13 points apiece. Wheeler went 4-for-13 and had four rebounds, one assist and one steal. Pearson shot 4-for-10 with three rebounds, three assists and one block. Khadaijia Brooks scored 11 points (3-for-4), and had five rebounds, two assists, two blocks and one steal.

That second block for Brooks put her at 71 for her Herd career, which ties her for 10th in program history in career blocks with Tammy Simms (1986-87).

Princess Clemons added 10 points (2-for-9), went 5-for-5 at the line and had five rebounds, five steals and one assist. Lorelei Roper contributed eight points (4-for-8), 10 rebounds and one assist.

Brooks, who has seen her scoring dwindle since the end of non-conference play, said she feels she is beginning to find her stroke after she put a lot of pressure on herself.

“Every time I shoot it, I think it’s going to go in,” Brooks said. “I haven’t shot the ball well…It’s my last year and I wanted to leave my mark. As we’re getting closer to the end, I’m just letting the game come to me.”

Coach Kemper said that it shows who she is that she said that.

“I didn’t know what she was gonna say, I didn’t know she’d get there,” Kemper said. “She’s right on, as a player they say ‘I want to be this and do that.’ Bottom line… I don’t care what her stats say, she’s a really good player and has been for a long time. She led in the right way tonight.”

The Herd accumulated 29 in the paint, 14 points off the bench, 12 off turnovers, 11 second chance and nine from the fast break.

The Roadrunners added 27 points in the paint, 12 off turnovers, 12 second chance, seven fast break and just two from the bench.

Up next for the Herd, it stays home to play host to the UTEP Miners at 1 p.m. Saturday afternoon.