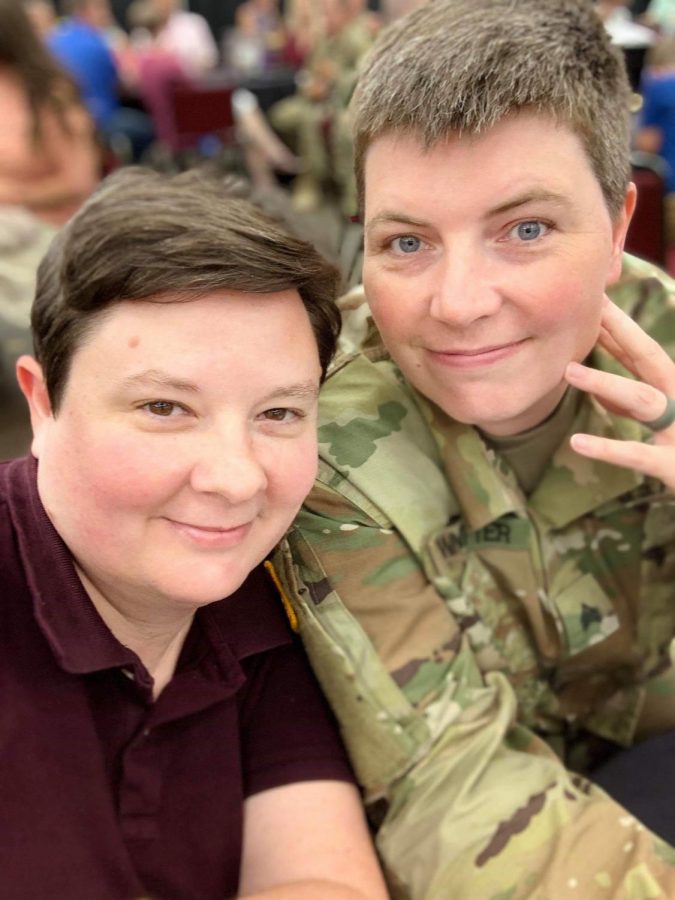 It is true, distance does make the heart grow fonder, for two Marshall University faculty members, that is.

Married in 2016, Lori Thompson and Kristen Vannatter have been nearly inseparable since they met 16 years ago, until this past summer. As a generator mechanic with the 150th Armor Brigade in the West Virginia Army National Guard, Vannatter was called up for a deployment to Kuwait in August 2019, putting her life in the Information Technology Department at Marshall on pause. Lori, archivist and digital preservation librarian at Marshall, said adjusting to her wife’s absence has been tough.

Thompson said not doing routine activities, such as eating lunch together every day like she and her wife did prior to deployment, has been one of the most difficult changes to acclimate to.

“I have been very blessed to have some colleagues, students, and friends who join me for lunch,” Thompson said. “I don’t always grab lunch away, but I try to get an hour away from my desk and so that was always that time, so not having somebody to share it with…I have made friends.”

Thompson said another difficult aspect to manage, aside from maintaining their household and taking care of their two cats, has been missing out on sharing moments together.

“You don’t realize how much you do share with somebody until they’re not here,” she said. “She’s my best friend.”

Thompson said she wants to share her day-to-day activities with Vannatter like she once did, such as going to Marshall softball games together.

“This is our season,” she said. “We are big sports fans and Marshall softball sports fans, so the holidays were hard, but open day of softball is harder.”

According to Thompson, also a U.S. Army veteran, her wife doesn’t always have the energy to talk at the end of her workday because she is “always at a heightened sense of awareness of her surroundings” throughout the day, which can be physically and mentally exhausting.

Due to her own experience as a soldier, Thompson said she understands when communication between she and her wife is sparse or vague.

“I am appreciative that I know some of that day-to-day rigor, so that I respect that she can’t always talk,” Thompson said. “She’s tired. It’s emotionally draining even though she might not physically be doing things because I remember those days and nights, pulling guard duty.”

Although being apart from one another has been challenging, Thompson said it is also very rewarding.

“I think (the deployment) has brought us closer in a lot of ways,” she said. “It’s much easier now to recognize the little things that partners do for each other.”

Thompson said she is now more aware and appreciative of all the tasks Vannatter helped her with when she was home. Their emotional bond has also been strengthened through the distance between them, according to Thompson.

“Because we do spend so much time together at work and on campus and driving back and forth, we are very close, so it’s not made it harder, I think we just appreciate each other more,” she said.