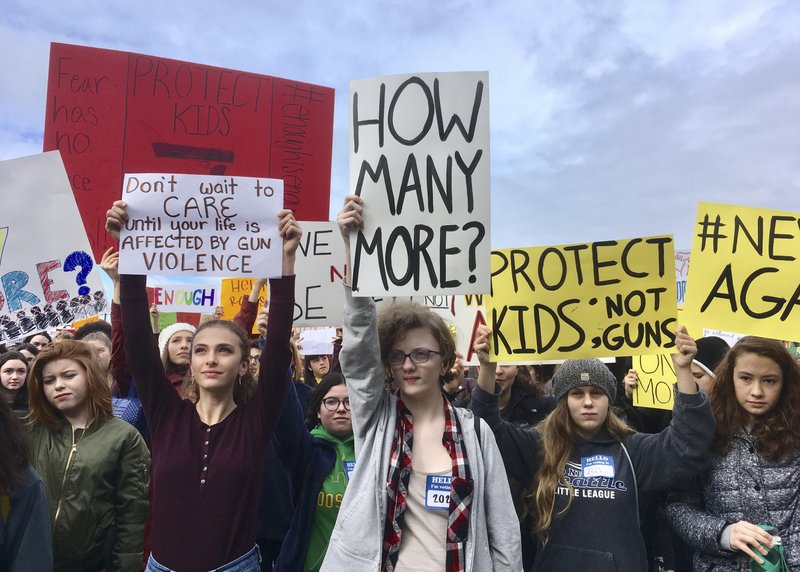 Students at Roosevelt High School take part in a protest against gun violence in March 2018, in Seattle. It was part of a nationwide school walkout that calls for stricter gun laws following the massacre of 17 people at a Florida high school.

In a country where nearly 700 people die of gun violence every week, West Virginia’s gun violence problem is anything but an anomaly, but the state’s lack of safe laws and regulations to prevent such deaths is unacceptable.

The report also reveals that West Virginia exports guns later used for crimes at the second-highest rate in the country. The state is one of 21 across the U.S. that received an “F” rating on the 2020 Giffords Law Scorecard.

Earlier this week, the Charleston Gazette-Mail reported that West Virginia experienced 347 firearm deaths in 2018, the most recent year with available data. 2018 marks the third straight year that firearm deaths in the state have surpassed the number of motor vehicle deaths. 2016 was the first year this had ever occured.

In addition to some of the worst gun death statistics in the country—and the world—West Virginia also ranks 34th amongst the 50 states in the category of gun law strength.

Of fourteen potential regulations regarding gun ownership that the Law Center measured, West Virginia implements just one, which is the prohibition of gun ownership for citizens with domestic violence misdemeanors.

The report suggests several reliable methods and steps the state could take that have proven to reduce gun violence significantly in other states in the U.S. and countries around the world. These steps include requiring comprehensive background checks and waiting periods before each gun purchase and repealing the state’s carry law that allows citizens to carry loaded, concealed weapons without a permit.

Regardless of one’s opinions on the right to own guns or the 2nd Amendment, West Virginia’s gun violence and gun safety problem is undeniable. The U.S. is experiencing a gun violence epidemic unlike any the world has ever seen, and West Virginia is in the middle of it. We must remind ourselves this is not normal. This does not happen elsewhere in the world, and we must demand better for ourselves.

Equally as undeniable is the reality that clear majorities of citizens—at least nationwide—already support commonsense regulations on gun ownership that would almost certainly decrease levels of violence if implemented.

For example, a 2019 poll conducted by PBS NewsHour, NPR and Marist showed…

PolitiFact has also confirmed as “true” the reality that even upwards of 75% of National Rifle Association members support comprehensive background checks for all gun sales.

These polls are just two of countless examples which show the same reality: the American people know that, like all our rights as Americans, the right to own a gun does not come without common sense regulations and restrictions.

With bills recently passing the West Virginia Senate that would prohibit possession of firearms in municipal buildings and outdoor events and allow for roadside sales of firearms and the campus carry bill’s inclusion in the legislative docket for the current session, West Virginians should prepare for robust debate on gun legislation in the near future.

Aside from simply having the necessary conversations, citizens should demand better for ourselves than to continue serving as a sad symbol of the gun violence epidemic our country is facing. It may not be easy, but our clear path forward, if we care about justice and about our own collective wellbeing, is that we must use empathy, understanding and common sense to find common ground with each other and to enact changes that we all believe will serve the greater good by combatting this crisis.