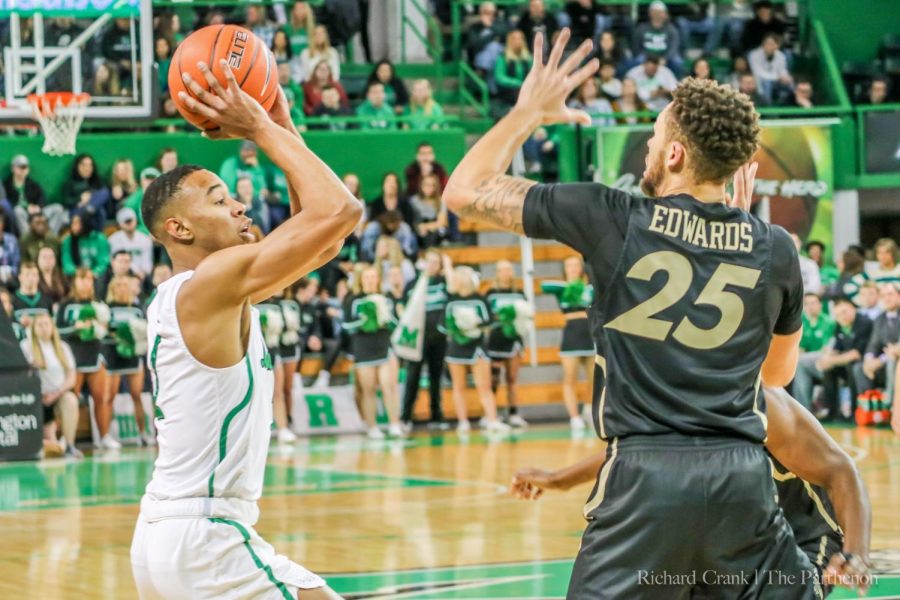 Taevion Kinsey lined up his shot during a home game at the Cam Henderson Center.

Marshall is currently tied for sixth place in the Conference USA standings at 6-6 while UTSA is tied for ninth at 5-7 and UTEP sits tied for 11th at 4-8.

Marshall will need some help in order to get into pod one even if the team gets two victories on the road this weekend.

Coming up first for the Herd is the UTSA Roadrunners on Thursday.

Despite its losing record, UTSA has the highest scoring offense in the conference at 79.0 points per game. Offsetting its high-octane offense, the Roadrunners defense is the worst in conference, allowing 77.8 points per game.

Leading the way for UTSA is junior guards Jhivvan Jackson and Keaton Wallace. Jackson is the conference’s scoring leader at 27.0 points per game while Wallace is in second place with 19.0 points per game.

Jackson and Wallace also pace the league in three-point field goals made with 93 and 70 respectively.

In its wins, UTSA has shot over 45% from the three-point line on average, and in its losses, the team has shot less than 33% on average.

The second and final matchup for the Thundering Herd will be the UTEP Miners on Saturday.

The Miners and Roadrunners split in their matchups this season with UTSA taking the first one, 80-77, and UTEP taking the second one, 86-70.

UTEP has a 12 point better average scoring defense than UTSA, which also makes them better than Marshall by about seven points.

Offensively, the Miners are tied for 11th in conference, scoring only 67 points per game.

The Miners will come into the game with the Herd after three straight losses.