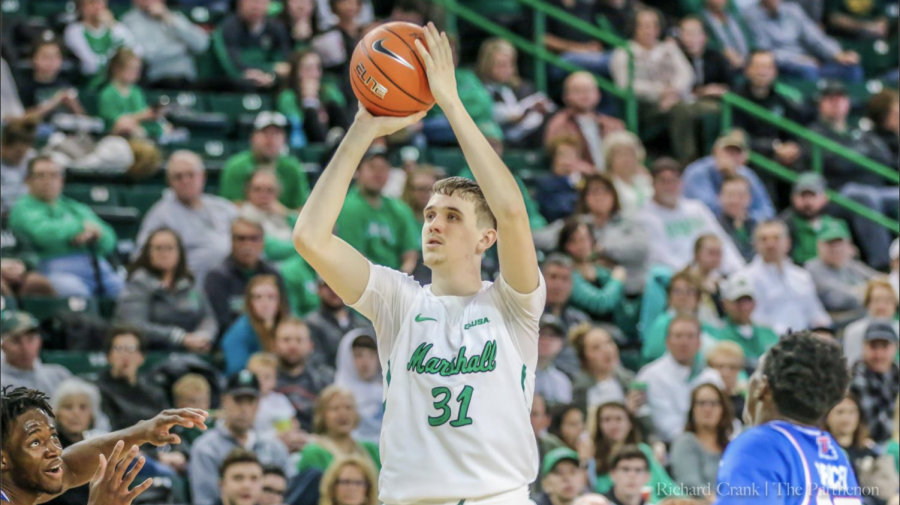 Mikel Beyers pulled up a shot against LA Tech.

RESULTS OVER THE PAST WEEK:

After a career best performance against Louisiana Tech on Saturday, junior forward Mikel Beyers has earned athlete of the week honors.

Although his game against Southern Miss on Thursday was a solid performance in its own right, his 24-point outing against the Bulldogs was on another level.

Not only did he obliterate his previous career high in points, 13, but he also helped fuel his team to a victory against a top conference opponent.

The obvious fuel that he added to the Herd’s comeback victory was his 6-for-9 shooting from three-point range, but no moment was bigger than the one that occurred near the end of regulation.

After junior guard Jarrod West missed a potential game-tying jumper with 10 seconds left, Beyers scampered to collect the offensive rebound. As soon as he possessed the ball – not knowing the time left on the clock – he faded away toward the Marshall bench. The ball arced high in the air, and when it came down, it swished its way through the net with five seconds remaining.

His shot was enough to send the game into overtime, in which Marshall never trailed again.

Beyers was taken out of the starting lineup at Toledo after starting the first seven games of the season. Interestingly, after being benched, he was able to put together a pair of season best performances with 13 points in each.

Nevertheless, in the subsequent weeks, he saw his minutes dwindle to a season low, and he was not awarded the opportunity to do much of anything on the court.

But when freshman big-man Goran Miladinovic was a no-go for last weekend’s games, he was gifted an opportunity that he was able to take full advantage of against Louisiana Tech.

Coming into Saturday’s game against the Bulldogs, it is doubtful that anyone pegged Beyers for a 24-point explosion, but it seems safe to say he will be in the forefront of many people’s minds going forward.