“Aesthetic Journalism” exhibit showcases other side of journalism 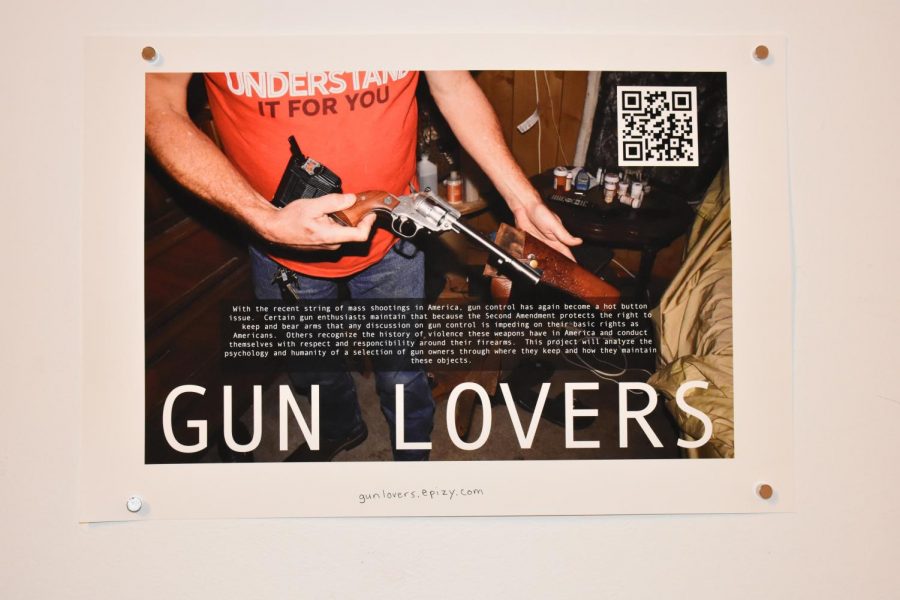 One of the pieces featured in the exhibit, “Gun Lovers” by Sean Laishley, is an analysis of the gun culture in the state of West Virginia. You can view the full story at gunlovers.epizy.com

The Birke Art Gallery’s current exhibit titled “Aesthetic Journalism” features art from six Marshall University students who are working to bridge a gap between journalism and photography, according to Tijah Bumgarner, organizer of the exhibit and assistant professor in the W. Page Pitt School of Journalism and Mass Communications

“I wanted to showcase the work that’s done in journalism in a different space other than the newspaper or television news because these students are making work the doesn’t necessarily fit that,” Bumgarner said.

Jamie Platt, the gallery director for the School of Art and Design, also worked on putting the exhibit together. When choosing the artists for the gallery, Bumgarner and Platt both agreed it was important that all of the students needed to have taken journalism courses.

“It’s the idea that the image-maker has a responsibility to tell stories through images,” Platt said. “To think about the language of journalism, that’s what these students were learning in those classes. That’s why it was limited to people with those classes in their background, to make sure that when they talk about what images do in journalism, that they have that knowledge of what it is.”

On display in the gallery are photographs in different formats. Platt also explained how beyond photographs, there is even one example displayed on an iPad with a scrolling photo essay by Sarah Ingram, a senior journalism student.

“These are more than just photographs,” Platt said. “The way that we consume news now is so various, there is photography (in the exhibit), but there is also this photo essay which is very similar to how most of us take in news nowadays, that scrolling motion. In this age, I think that images in that format hits so many buttons.”

Lilly Dyer, one of the artists in the exhibit, displayed a photo series telling a story about a nail artist in a salon. The woman pictured is wearing a shirt with the words “I am Powerful” in pink lettering.

Dyer said she met the woman whilst in North Carolina for an artist residency and really enjoyed her shirt, so she asked if she could take the woman’s picture.

“It’s basically telling stories in your own style and in your own way,” she said. “It’s told through the artist’s eyes and how they want to communicate that story through the choices that they make.”

A guided tour of the exhibit will be offered at 12:15 p.m. Feb.17 and is expected to take 30 minutes. Platt said that during the tour, she will be informing those in attendance on significant points in the exhibition.

The exhibition “Aesthetic Journalism” will be in the Birke Art Gallery in Smith Hall until Feb. 20 and is free and open to the public. Gallery hours are Monday- Friday from 10 a.m. to 4 p.m.

Emily Haylett can be contacted at [email protected]