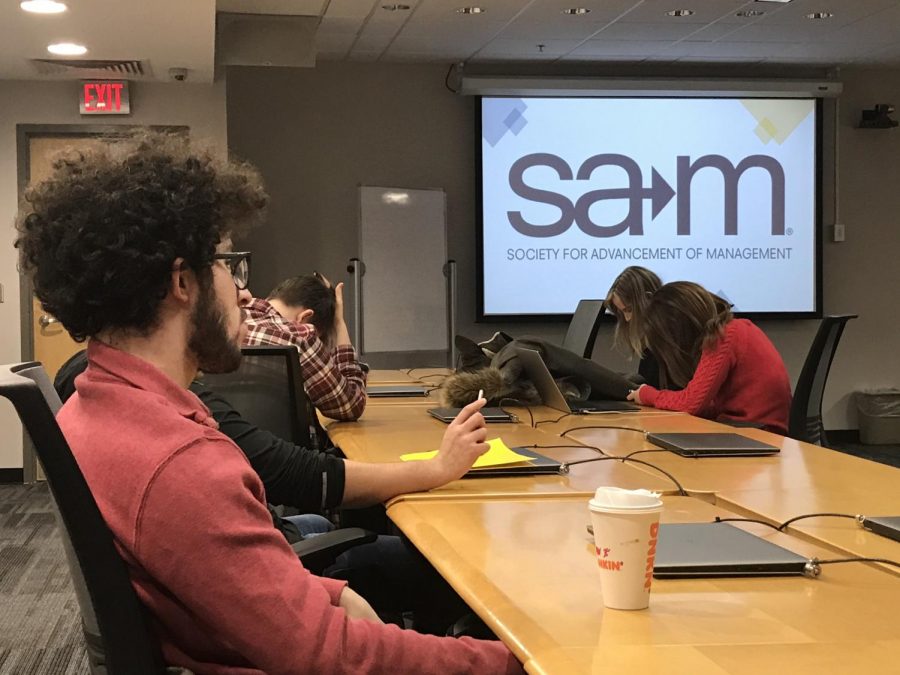 SAM members meeting to discuss the teams of the upcoming national conference.

A management society on campus is revitalizing their presence while giving all majors the opportunity to gain experience in business and networking, and one of these opportunities is the SAM National Conference from March 19 to March 21 in Nashville, Tennessee, said Alejandro Valladares, president of SAM.

The Society for Advancement of Management, or SAM, is an organization open to any major where students can network, attend business conferences and grow professionally, Valladares said.

“SAM gives the opportunity to meet other people in the management field whether they are an engineering or business major,” Valladares said. “We have two teams presenting in the Case Competition.”

In the competition, teams are presented with a case, or a problem a company is facing. That problem is analyzed, and they create a recommendation that is presented to a panel of judges, Valladares said.

“We present this in front of members and representatives of the actual company we are helping and other board members while competing against other schools,” he said.

Preston Humphreys, vice president of SAM, said he is excited for the opportunity to present on the national level.

“Knowing that a small university like Marshall is competing with people from Ohio State and Notre Dame, a lot of the bigger colleges, and just having our people compete with theirs and win against them shows great competition,” Humphreys said.

Other events at the SAM competition include extemporaneous speech, individual written cases and duo business pitch.

Aside from competing, SAM is an organization focused on creating a community with its members and promoting philanthropy, according to Valladares. He also said there will be events later in the year to help form that community.

“We are probably going to have a social at the Battlearium, so people can mingle, get to know each other and create a bond,” he said.

Humphreys said the creation of that bond is important to the organization because it is experiencing a revitalization.

Humphreys said that even though SAM was not as active in previous years, he and Valladares chose to lead and revitalize the group.

“Two years ago, SAM was brought to Marshall University and it kind of got disbanded a bit and fell to the waist side,” Humphreys said. “We are welcoming, we love to have more people and are looking to expand,” Valladares said.