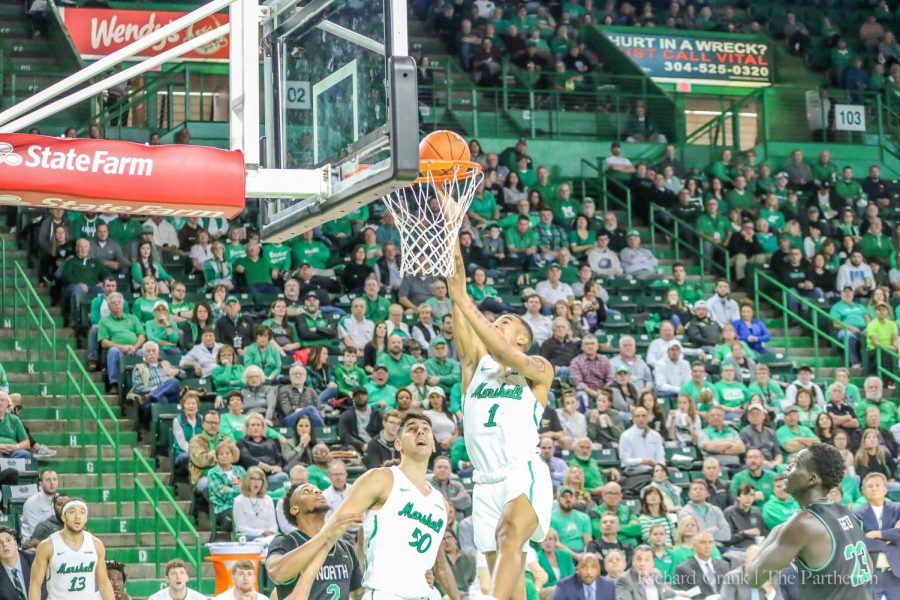 Marshall basketball player Taevion Kinsey floats to the basket for a dunk.

Marshall University went up against the WKU Hilltoppers on Wednesday evening where the Hilltoppers defeated the Herd with the final score 64-60.

“You saw us at our best and you saw us at not so good,” Herd Head Coach Dan D’Antoni said. “We will go back at them again Saturday, again this is going to be an up and down season with this team.”

Marshall won the tipoff by sophomore Taevion Kinsey and the first point to be scored in the Cam Henderson Center was by freshman Marco Sarenac with a 3-pointer. The Herd played strong throughout the first half of the game ending at 39-25 with a 14-point lead on the Hilltoppers. Redshirt sophomore Iran Bennett put up 10 points, followed by Sarenac with seven points and junior Jarrod West with five points.

“They didn’t do anything that we didn’t know that they were going to do,” West said. “They came out in the second half, did the same thing. It’s not like they changed anything.”

The Thundering Herd will be back in action on Saturday Jan. 25 at Western Kentucky. Tipoff is set for 7:30 p.m. at E.A. Diddle Arena.

Stormy Randazzo can be contacted at [email protected]