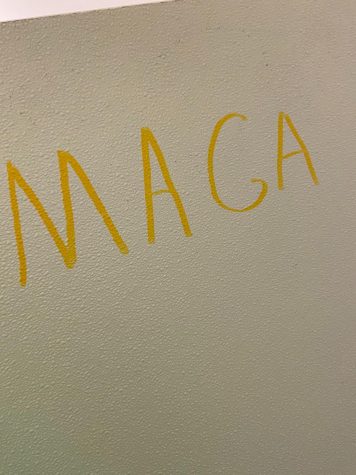 Hate graffiti was discovered written in two different bathrooms on Marshall University’s campus Thursday afternoon. Marshall’s Police Department is currently investigating, and it is still unclear if the incidents are connected.

One of the bathroom stalls included the words “Kill the Jews” written across the toilet seat and “MAGA” on the wall of the same stall.

Marshall Communications released a statement regarding the event noting that the behavior goes against all of Marshall’s policies. President Jerry Gilbert cited the Marshall Creed, stating the university is expected to be accepting.

“Members of the Marshall University community are expected to abide by the Marshall Creed, which says we are, among other things, a judicious, civil, safe and pluralistic community,” Gilbert said. “This hate speech is against everything we stand for. We will do everything we can to identify the perpetrators.”

Previous incidents have also been reported: one incident in a bathroom earlier this semester, and swastikas were discovered on posters in Harris Hall in December 2019.

Ginny Painter, the senior vice president for communications and marketing, said the university has seen an increase in hate graffiti on campus, and different departments are working together to find out who is responsible for each incident.

“It’s very concerning, and that’s why we’re taking this graffiti so seriously,” Painter said. “MUPD is doing a full investigation to see if we can identify what person or people is responsible for these to put a stop to it because it is unacceptable.”

Painter said if it is discovered that a student(s) is responsible for the graffiti, the matter will be dealt with through the student judicial process, according to the student conduct code. If an employee is responsible, Marshall’s Human Resources policies will handle the incident.