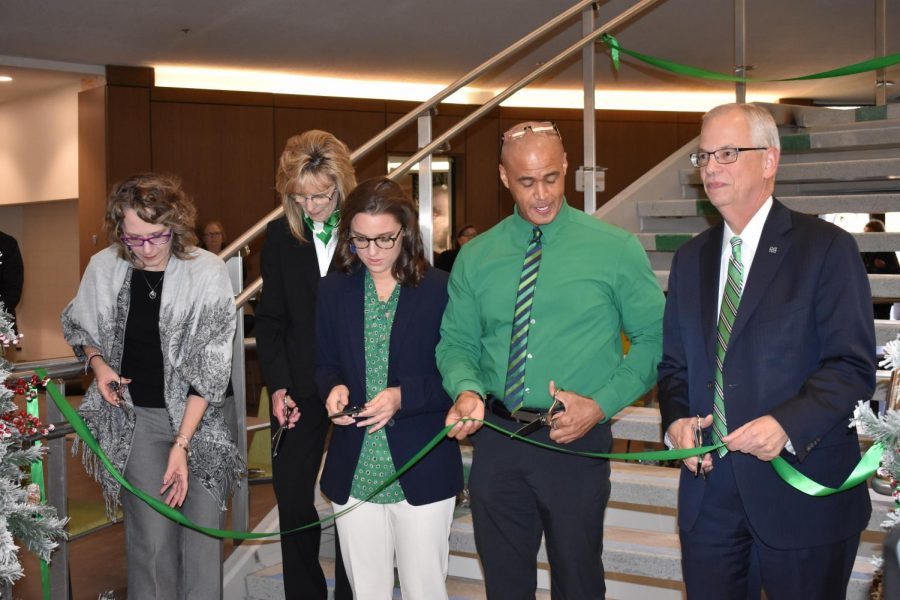 Opened in 1971, the building had not had a facelift since the 1990s. As the center of student life, the MSC was ready for some updates, according to William “Tootie” Carter, the MSC director of business operations.

“The Student Center serves as a hub of campus; we like to call it the living room sometimes, and as you all know when you have a living room, you got to update it,” Carter said. “And it needed it. The last time we actually did a renovation, if you want to call it that, (was) back in the ’90s. It was basically new flooring, light fixtures and that kind of thing.”

Carter walked attendees at the unveiling through the space while sharing the new pieces of the room, including a new memorial piece.

“Several updates from the stairs, the glass banisters, the flex space, the new flooring, the fireplace, you name it,” Carter said. “The football team memorial. A student came up with the idea to make it more interactive. Kyle Powers is a student and came up with a great idea to make it interactive. It’s a touch screen. For instance, you can touch a player, a coach and it gives a little bio about them.”

Along with the renovations to the Student Center, Carter spoke of the updates made to the bookstore and food court.

Marshall President Jerry Gilbert expressed thanks and recognition to all involved in the renovations to the building, as well as his feelings about the transformation.

“This is a truly beautiful renovation,” Gilbert said. “It’s so bright and modern. It is all that I had hoped it would be. We went from the Flintstones to the Jetsons.”

Gilbert also included the meaning behind the MSC and the impact it has on not only those connected with Marshall, but to the community as well. He explained that the building serves as a memorial to those who died in the Nov. 14, 1970 plane crash, just like the fountain, and has similar meaning.

“Harry Bertoia, the designer of the fountain, wanted to commemorate the waters of life. Rising, renewing, reaching to express upward growth, immortality and eternality,” Gilbert said. “On any given day, the Student Center does the exact same things. It is full of life and activity, and it is the main hub for students, staff and faculty on this campus. For the surrounding community, this building holds celebrations, banquets, parties, reunions and weddings. The Memorial Student Center has been the heart of many wonderful memories of Marshall sons and daughters for the past 48 years.”

Following the ribbon cutting, a reception took place for guests to mingle and explore the new MSC.

Special thanks were given to all of those who worked to make the remodeling possible, including the Marshall University Board of Governors, Ed Tucker Architects Inc., E.P. Leach & Sons Inc., Follett Higher Education Group, Sodexo Inc., RossTarrant Architects and SWOPE Construction Co.