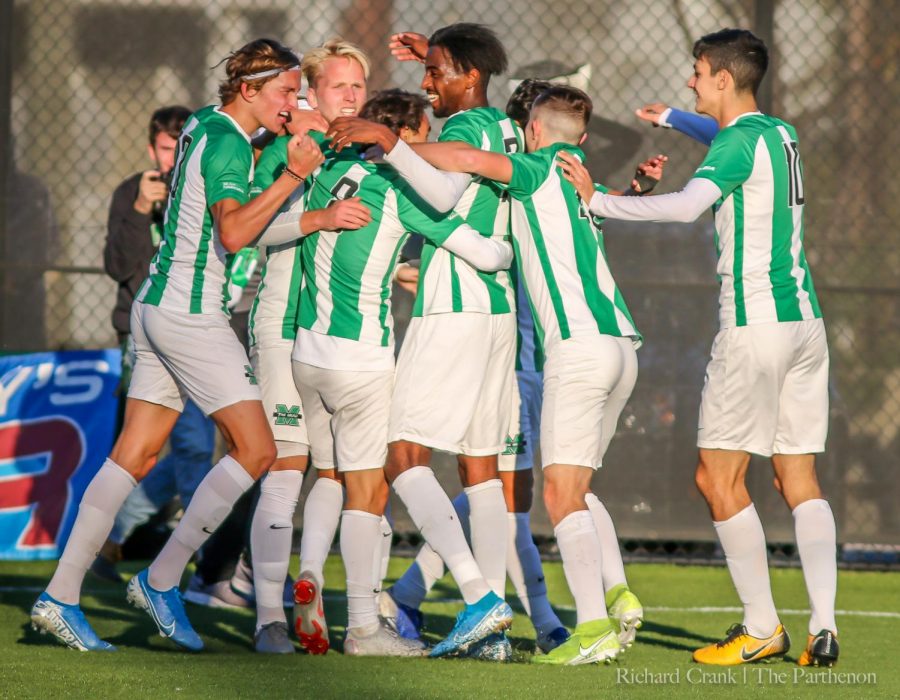 The No. 11 Marshall University men’s soccer team concluded its 2019 season in the Sweet 16 round of the NCAA Tournament with a 4-1 loss on Sunday night at No. 6 University of Washington.

“We have a lot to be thankful for, a lot to be proud of,” Pita said. “Overall, it was a good season. I think it opened the doors for next year. I was not expecting anything less than that. I am happy with the season. I wish I could play another season to go further with the boys next year.”

The Herd finished its historical season with a 16-3-3 record (5-1-1 Conference USA). Marshall had a record-breaking season as the team claimed its first ever Conference USA Regular Season Championship with a win over FIU and the Conference USA Championship title with a golden goal made by junior midfielder Pedro Dolabella over the Charlotte 49ers, 1-0.

Those 16 wins set a new record of wins in a season while the old record was 14, set in 2000 when Marshall won the Mid-American Conference Regular Season title. The three losses set a program record in a season by the 2000 team and was tied again in 2010 and 2012.

In his third season at Marshall, Head Coach Chris Grassie was named Conference USA Coach of the Year. In his first two seasons, he obtained eight wins each and doubled them this season.

“It was a terrific season,” Grassie said. “It’s something for the guys to really be proud of. All in all, two conference championships, being seeded in the NCAA Tournament, beating WVU, it’s been a great season.”

The team became nationally ranked on Oct. 15 at No. 21 and continued to be ranked in the NCAA/United Coaches’ Poll Top 25 for the rest of the season.

Heading into the NCAA Tournament, the Herd was awarded the 11th rank and received a first-round bye. In the second round, Marshall defeated the West Virginia Mountaineers 2-1 at Hoops Family Field in front of a record-breaking crowd of 2,126 people.

“It’s great for the program,” Grassie said. “We’ve always had a strong fanbase who supports us from the community.”

Pita praised the Huntington and Marshall communities for their continuous loyalty to the team throughout the season.

“It’s amazing,” Pita said. “The support, it’s amazing how the community hugged us and supported us no matter what. It’s going to be sad to leave.”

Redshirt freshman forward Milo Yosef logged 12 goals this season, the only Herd player to score double-digit goals in a season since Tom Jackson in 2011. Yosef was awarded C-USA Offensive MVP and Freshman of the Year.

Roberts’ 10 assists during this season was tied for the program record for most in the season. Roberts also led the C-USA in assists.

Pita played in goal every minute of the season and recorded eight shutouts for the Herd, which is good for second-most in a season in team history. He was awarded the C-USA Co-Golden Glove Award.

Osmanu was named C-USA Defensive Player of the Week twice this season, back-to-back. He was named to First Team All Conference.

Westmeyer had nine assists on the season and was second on the team following behind Roberts.

Notardonato was the back-up goalie who continued to help set the team up for its success on and off the field.

“Next year, obviously we lose some key guys, but next year we will be back, relog and rebuild a little bit stronger and go from there,” Grassie said. “We’ve got a lot of talent, and we still have so much to work on. It’s going to be exciting. This year was about proving that we can. Next year is knowing that we can and building from that to be an elite team.”