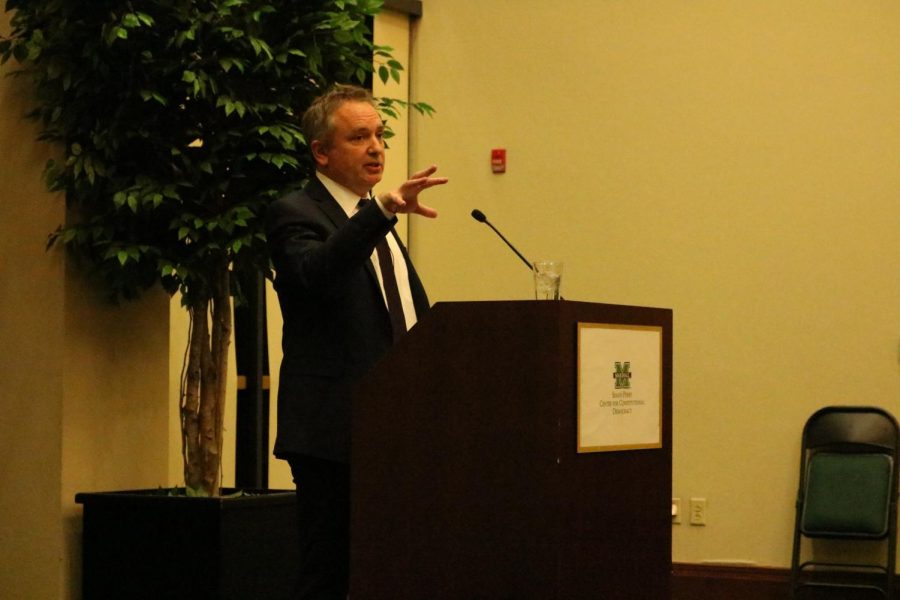 David Barron, United States Circuit Judge of the Court of Appeals for the First Circuit, addresses the crowd during an Amicus Curiae lecture Nov. 12.

Reflecting on the history of how presidents and Congress have allocated powers of war can allow people to learn more about the government and separation of powers, said a U.S. Court of Appeals judge Tuesday at the final Amicus Curiae lecture of 2019.

“When we think about war powers, we often think about the question of who gets to decide to go to war,” said David Barron, United States Circuit Judge of the United States Court of Appeals for the First Circuit and former professor at Harvard Law School. “But there is another feature of the question, which is after a war is underway, who gets to decide how to run that war? Is that for Congress to decide or the president?”

Barron has served as counsel and amicus curiae before the U.S. Supreme Court, and while overseeing the Office of Legal Counsel, he provided advice on constitutional and statutory matters to the Obama administration.

After serving in this position, he was nominated to the United States Court of Appeals for the First Circuit in 2013, and he said he became more invested in the topic of separation of war powers, writing the book “Waging War,” which takes a look at historical examples in our country where the president and Congress have disagreed.

“I was extremely interested in what history suggested, how presidents responded to these situations in the past,” Barron said. “What strategies did they use? What approach did they take? And how did they actually manage the reality of trying to fight a war in the way they wanted to when Congress was hostile towards their approach?”

During the lecture, Barron focused on three American presidents, using the historical examples of George Washington, Abraham Lincoln and Franklin Roosevelt to show how presidents have responded to Congress when there is conflict over which course of action should be taken.

One aspect of the examples discussed in the lecture is that the general public knows about them in history, so the decisions made can be evaluated, but Barron raised the question of what happens in the future if people don’t know about them?

“To the extent that modern warfare is likely to occur increasingly in secret, the ability for there to be accountable decision-making is reduced,” Barron said. “That’s one of the biggest challenges for the country’s system of separation of powers going forward, is what if we don’t know about what is being done? Whether you can have an effective system of separation of powers in terms of war, when it is not visible, is obviously a very serious challenge.”

Although some often think the president is the aggressor in going to war, Barron said that people must not forget that there are times where the roles are reversed.

“The separation of powers is designed to deal with situations in which the president is the aggressor, and times where Congress is the aggressor,” Barron said. “I think it’s a mistake to think that battle between the political branches, when it comes to war, is that the president is always the aggressor and Congress is always the restraining force against it. It was certainly not my experience when I was in the Obama administration, and I don’t think it’s the experience of history.”

Another issue discussed during the lecture was how the narrative shaped around the act of going to war affects who gains more control over the course of actions.

“If there is anything old in this debate about who controls the conduct of war, it is that people are always saying it’s new,” Barron said. “What I mean by that is that people who are always saying we don’t have to follow any particular rules usually make some argument that the particular type of war that we are experiencing is so new that the old rules are quaint and can’t be followed. But once you start to realize they are always saying this, going all the way back to the Civil War, you start to realize that it may not be as powerful of a point as you may think.”

The judge also visited a couple of classrooms to discuss his book and its findings with students on campus. He said it is essential to spread this knowledge to young people for a better future.

“Universities are such important institutions, and the young people that make such an effort in them to learn about our country are such a key part in whether the country is going to have a future that it deserves,” Barron said.