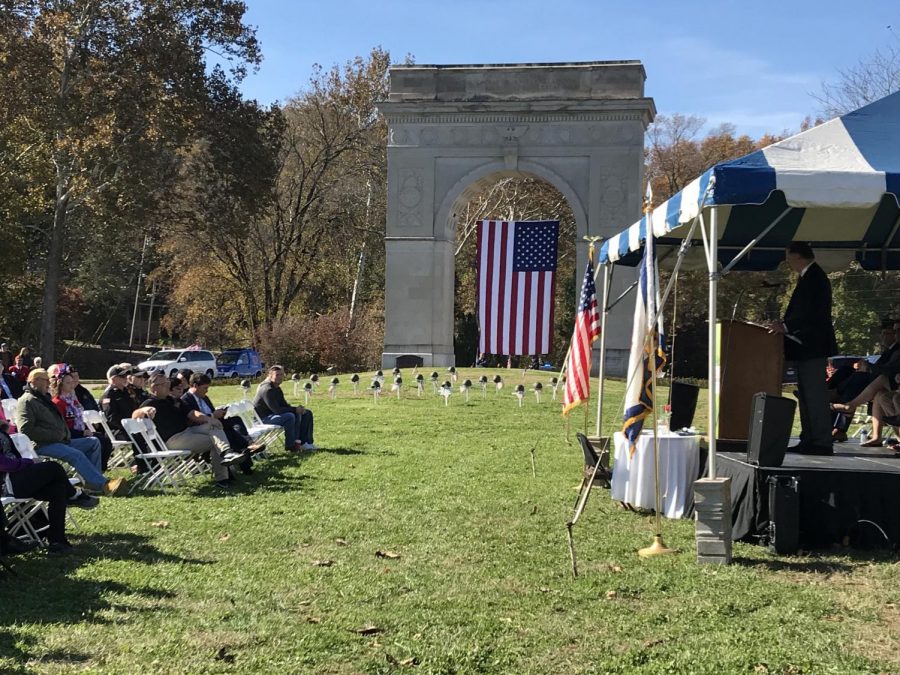 Service member sacrifices were honored by legislative members, families, children and canines alike at a Veterans Day program and ceremony.

“I’ve actually been asked ‘What do veterans sacrifice?’” said J. Brian Nimmo, director of the Hershel “Woody” Williams VA Medical Center. “Quite frankly, I can’t figure out if it’s out of sarcasm or genuine curiosity, but I answer it anyway.”

Nimmo was the keynote speaker during the annual Veterans Day program and parade. Beginning in Old Central City and ending at Huntington’s Veterans Memorial Arch in the park, the parade was just one aspect to the ceremony to honor those who have served.

“They sacrifice by missing birthdays, weddings, the birth of the children, not being there when their loved ones pass away, spending holidays far from home, and these are just a few examples,” Nimmo said.

Nimmo, along with other guests, spoke to an audience of veterans and their loved ones, saying that they have made sacrifices as tough as these, and often the ultimate sacrifice, giving their own life, throughout history.

“If you don’t think that’s enough of a sacrifice, try using a rock as cover in Afghanistan because people are shooting at you,” Nimmo said. “How about carrying the bodies of your shipmates off your ship after a major fire at sea, or on the islands of the South Pacific carrying a flamethrower up a hill side, as thousands of soldiers have you as their number one target.”

Hosted by the Veterans Committee for Civil Improvement and the Greater Huntington Parks and Recreation District, the program was to honor those in the Armed Forces currently alive today, their loved ones and those who have lost their life in the line of service.

“While serving as a foreman in the world’s greatest navy, I was able to visit 16 different countries,” Nimmo said. “I can tell you for a fact that no other country has quite the freedoms that we take for granted, and that’s because of those who give their lives so others can be free.”

Crosses stood in rows in front of the Veterans Memorial Arch with the helmets of fallen soldiers resting on top to serve as a reminder of those who gave up everything for freedom.

“I want to encourage everyone to take part in some way to be there for our veterans,” Nimmo said. “For example, you coming here today and supporting them and their families shows that you care.”

Nimmo encouraged the audience to bring one additional person with them to next year’s program in hopes for the crowd to double in size and appreciation.

“A true hero means throwing yourself in the midst of chaos in order to ensure that the American people can continue to do what they want to do, even if it means giving the ultimate sacrifice,” said Ron Bonecutter, support service chief and retired Air Force veteran.

The Fairland Highschool Marching Band performed each armed service song for all five branches of the military, allowing individuals to be honored alongside their branch.

“West Virginia has more veterans per capita than almost any other state,” said Michael Browning, a representative from the office of Sen. Joe Manchin, D-W.Va. “I am so proud to call this state home.”

Mayor Steve Williams also attended the ceremony, crediting veterans in his family for many of his accomplishments, as well as for their sacrifices.

“Our veterans, regardless of demographic, they are patriots,” Williams said. “They don’t serve to become rich or famous, they simply serve their country.”

“I do believe America is the greatest country in the world,” Nimmo said. “Sometimes we just have a problem with getting along.”

Sarah Rowe can be contacted at [email protected]