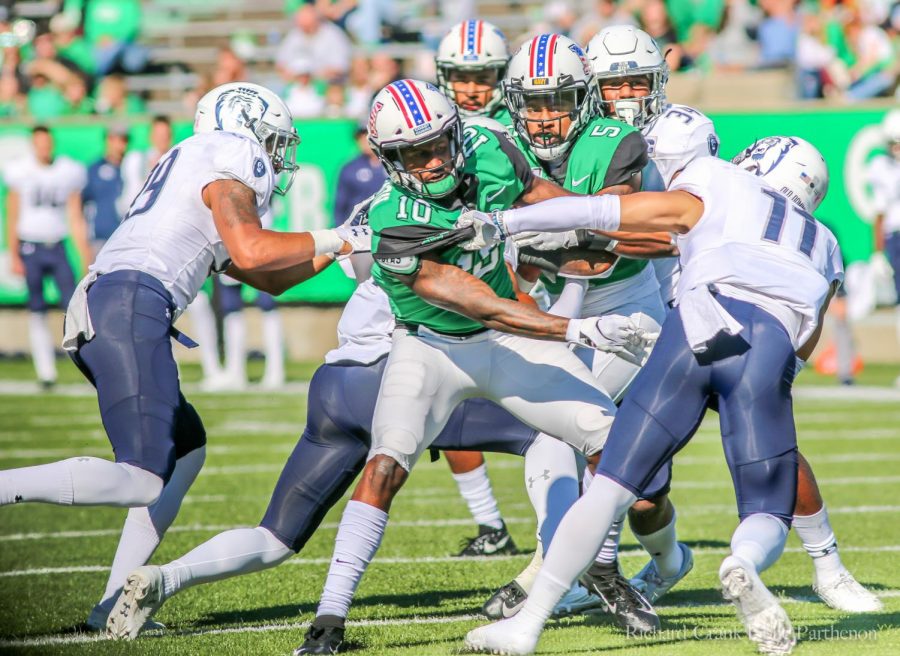 Tavin Richardson and Kereon Merrell in the game against Old Dominion

Marshall University Thundering Herd will take the field to face off under the Friday night lights in a Conference USA battle against Louisiana Tech in the annual 75 game, which honors the lives lost in the 1970 Marshall team plane crash.

This season the game falls against the top team in the West Division of C-USA, LA Tech, meaning the stakes are high for the matchup. The winner of the game between Holliday’s squad and LA Tech would potentially have home field advantage for the Conference Championship game.

LA Tech has a record of 8-1 and has yet to lose a conference game. The sole loss of the season came in their first game against nationally ranked No. 10 Texas, 45-14. Currently, LA Tech has the 13th best scoring offense in the country with 44 touchdowns while averaging 38.1 points per game.

“They do just about everything right,” redshirt senior linebacker Tyler Brown said.  “Their quarterback is a really good player, and they are two-to-three deep at running back and just a good football team all around.”

Fifth year senior quarterback J’Mar Smith for the Bulldogs has thrown for 2,483 yards and 14 touchdowns so far, bringing a challenge to the Herd’s secondary yet again.

Marshall had an extra week to prepare for LA Tech coming off of its second bye of the season in which they focused on player health and planning its attack for the highly skilled Bulldogs football team.

“What makes them unusual is that on each level of their defense they have one or two guys that are pretty solid across the board,” redshirt sophomore Brenden Knox said.

After dropping its first conference game of the season, the Thundering Herd has yet to lose a game, going 4-0 clicking on all aspects of the game. The Marshall defense will need to have a big game facing the high powered Bulldog offense, but the Herd offense will need the young playmakers such as freshman wide receiver Broc Thompson and others to produce yet again, since LA Tech is particularly good at stopping the run.

“The biggest thing is the young guys still making plays on the outside,” Knox said. “Getting into a groove early on with the offensive line and feeling good about themselves early is big.”

Marshall vs. LA Tech will kickoff Nov. 15 at 7 p.m. EST at the Joan C. Edwards Stadium.