Community to remember 75 with fountain ceremony 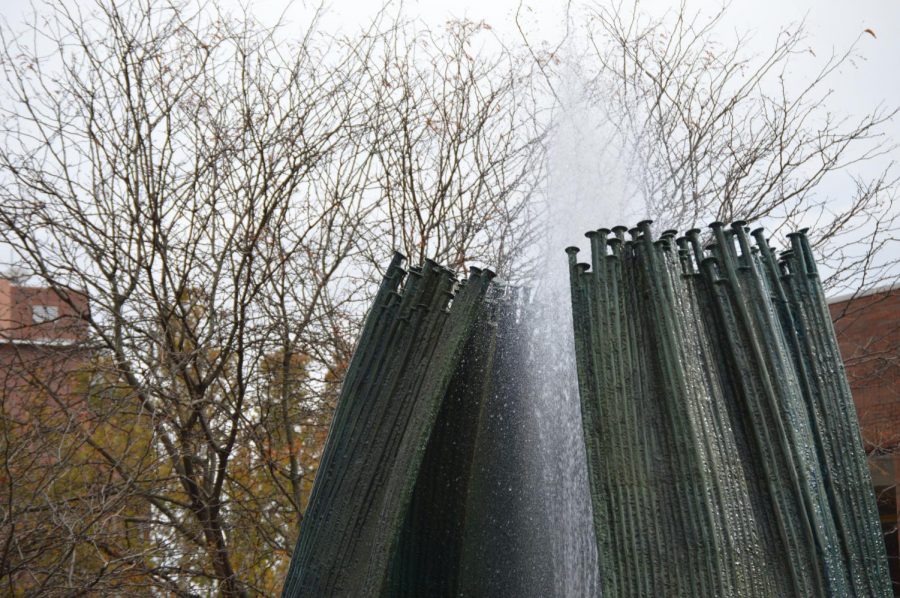 “We need to know about the hardships that the Marshall family and the community went through,” Gilbert said. “That history is intertwined with the present and by knowing it, we affirm the strength of character of our university.”

On a cold, rainy night, Marshall University was forever changed after a plane carrying the football team crashed on Nov. 14, 1970, killing the 37 players, eight coaches, 25 fans and five crew members aboard.

To this day, it remains the single worst sports-related air tragedy in American history.

“Future students need to know the difficulty and pain the Marshall community endured and how, despite challenges, the university moved forward with determination and resolve to not be diminished or defeated by the terrible loss,” Gilbert said.

The people of Huntington came together in the aftermath of the tragedy, attending funeral after funeral for weeks, grieving with one another over the loss of community members.

Marshall would eventually rebuild the football program in 1971, but it struggled, coming out of the decade without one single winning season.

However, in one of the most remarkable comebacks in sports history, Marshall football won more games in the 1990s than any other team in the NCAA, with a record of 114-25.

The Herd won the NCAA Division I-AA National Championship in 1992 and 1996, and closed the decade with an undefeated season in 1999.

“The resilient comeback reminds us of the power of coming together,” Gilbert said. “We were united as a university family and as a community. As the Marshall family, we loved and supported each other in the tough times so that we could go on to reach levels of success that many thought were not possible.”

The university’s resilient comeback was the focus for the movie “We Are Marshall” released in 2006, which highlighted how head coach Jack Lengyel and the Huntington community came together to overcome the loss and rebuild their football team.

The portrayal of the tragedy allowed many in the community to find closure years after the incident.

Every year, at the opening of fall practice, Marshall football Head Coach Doc Holliday leads his team on a mile-and-a-half run on 20th Street to the memorial at Spring Hill Cemetery so that each player, no matter where they are from, understands the importance of the crash to the community.

Gilbert said honoring those who lost their lives is inherent in the university’s identity and community as a whole.

“It is important to never forget those who perished in the tragedy because we lost part of our university family,” Gilbert said. “I think we should always remember and reflect on our family—past and present. It inspires us and binds us together.”

Each year on the anniversary of the crash, the water is turned off to the Memorial Fountain to honor the 75 individuals who lost their lives in the tragedy.

The 49th Memorial Fountain Ceremony will take place at the Memorial Student Center at noon on Thursday.

The event’s keynote speaker, Dr. Matthew Ralsten III, lost both of his parents in the plane crash.

According to Ralsten in a press release from University Communications, the incident had a particularly profound effect on his family, especially on him and his sister, Mollie.

“My sister and I lost both of our parents,” Ralsten said. “The impact of such a loss is hard to describe, but we were very fortunate to have been raised by our amazing extended family.”

Ralsten said the ceremony allows the community to reflect on the tragedy, while also assessing the progress the university has made in the years since.

“The loss of the 75 lives that tragic evening included many of the leaders in our academic, business and political community, as well as the players, coaches, pilots and crew,” Ralsten said. “The ceremony allows us to remember our loved ones while allowing us to also celebrate the amazing progress our school and community continues to achieve.”

Though the ceremony only lasts for two hours, Gilbert said preserving the history of the 75 individuals who lost their lives in the tragedy is something that Marshall strives to do on an everyday basis.

“The 75 are part of the history of Marshall, and we will always preserve that history,” Gilbert said. “Every year at the fountain ceremony, I feel the power of that love and support that comes from our common remembrance. It is amazing to be in the presence of the Marshall family on that day, and anyone that has experienced the ceremony knows how strong that feeling is.”