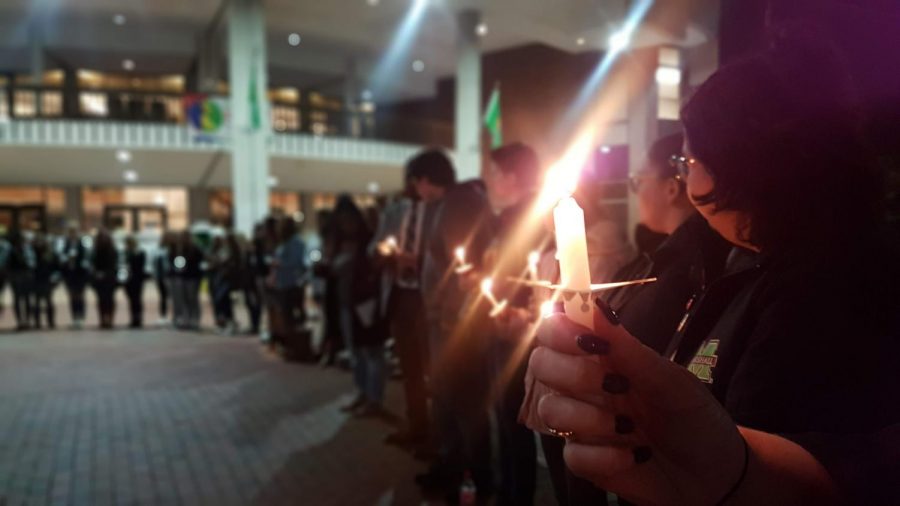 The Take Back the Night event, organized to show support for survivors of sexual violence and to raise awareness about available resources, was comprised of speeches, survivors' stories and candlelight Nov. 6.

Tears were shed by some participants of an event comprised of public speakers, sexual violence survivors’ stories and candlelight Wednesday evening.

The Take Back the Night event was organized to show support for survivors of sexual violence and to raise awareness among Marshall University students and the community about resources available for survivors when they need help.

“To me, Take Back the Night means solidarity,” said Sharon Pressman, executive director of CONTACT Rape Crisis Center. “It shows that survivors aren’t alone. And there are advocates and educators and people all around them with information, services and help. You are no longer a victim. You have survived sexual violence. You are now a survivor.”

The event was designed to be a comfortable and safe environment where survivors could share their personal stories and experiences. Tears were shed by both the speakers and community members when survivors talked about what they had been through.

“It’s a very emotional experience,” Will Sheils, a senior Marshall student, said. “I’m here to support one of the survivors. I heard her story several times, but it just makes me really proud of her and proud of everybody who came forward to embrace the challenge that they’ve been through and gain some strength back as a result of that.”

Claire Snyder, program coordinator of the Women’s & Gender Center, said sexual attacks are closer than some may think, and it is important to break the stigma.

“We don’t talk enough about sexual assault, about relationship violence,” Snyder said. “We act like these are things that happen to other people from bad strangers. But really, we know that, especially for college students, sexual assault is happening in our own community, in our own social circle, among friends. So, it’s important that we break the stigma, break the silence and talk about this.”

Shaunte Polk, program director for the Center for African American Students and the LGBTQ+ Office, said she appreciated that Marshall continues to have a powerful event to raise awareness of domestic violence and sexual assault.

Statistically, the rate of sexual assault and violence is significantly higher for African American and LGBT students than for their peers, Polk said. Additionally, an even greater percent of those attacks may not be reported, according to Polk.

After speakers finished, participants gathered in front of the Memorial Student Center. Each of them lit a candle and passed through the crowd until all the candles were lit to send prayers and thoughts to all the victims and survivors of sexual violence.

“I was really happy to see the students’ turnout because it shows me that students care about each other and they show up for each other,” Snyder said. “And I want every person on this campus who has ever been hurt, who has ever felt alone or scared, to know that they have the whole community here for them, for every student.”