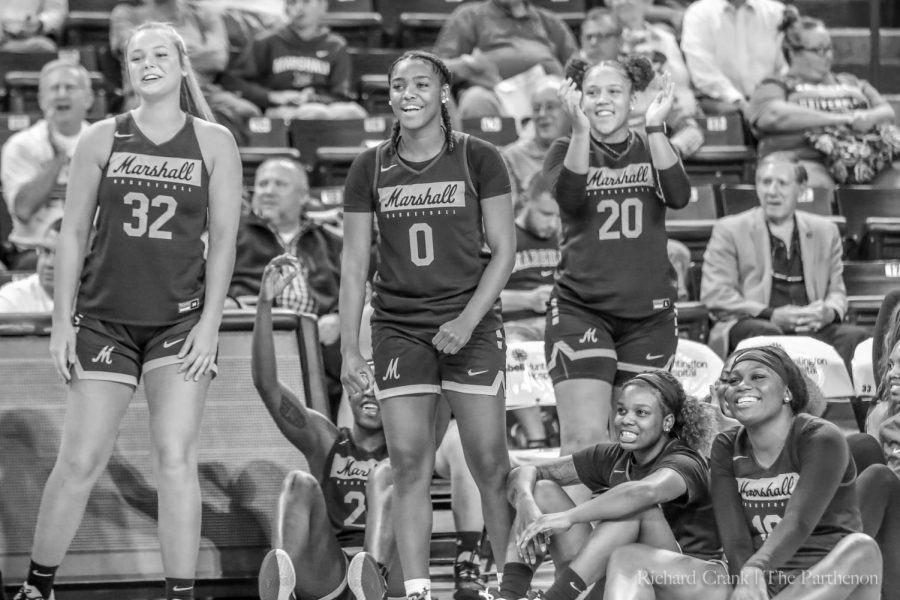 With the combination of talented returning players and newcomers ready to make an impact, the Marshall University women’s basketball team is in position to take another step forward, Head Coach Tony Kemper said.

“I think we definitely have a group of returners that will step up,” Kemper said. “Then I think we have some newcomers that are going to come in and make a big impact from the start.”

The 2019-2020 version of the Thundering Herd will be without its top two scorers from a season ago, Shayna Gore and Taylor Porter, but Kemper said the new people will help with the transition.

“There’s no question that our team’s going to be different this year,” Kemper said. “[But] I think we have the people in there to get it done.”

Brooks and Mayo started 31 of the 32 games last season while Pearson started in 26 of the 30 games she attended.

As a junior on a team where half of the faces are newcomers, Pearson said she views herself as one of the leaders of the team.

“There’s a lot of things I am used to that [the newcomers] don’t really know about,” Pearson said.

Pearson averaged 5.8 points per game last year, but she said leading is not only about how many points she scores; It is about the little things.

Even though two of the team’s top players are gone, Pearson said that the chemistry of this year’s team is better.

The team’s leading returning scorer is Brooks, who averaged 8.8 points per game last season to go along with rebounding the ball at a 6.1 per game clip.

The returning assist leader, Mayo, averaged 7.7 points in each contest, and she also led last year’s team in free throw percentage at 90%.

Coming back to the lineup this season is 6’2 senior forward Ashley Saintigene, whose action ended nine games into last season after a knee injury.

The 2019-2020 squad will not be able to rely fully on its returning production, however. Newcomers will inevitably have to help the progress of the program.

Congleton, who is originally from Huntington, played the past two seasons at Wabash Valley College, the number one ranked junior college Division I program. She led the team in scoring during the 2018-2019 campaign in lieu of an undefeated regular season.

“It’s more fast-paced,” Congleton said about the difference between Marshall and Wabash Valley. “The defense is way different. You have to slow down and make plays.”

There are seven total newcomers this season for the Herd with five of those being freshman. Aside from Congleton and Wheeler, the other newcomers include: freshman guard Christiana Mclean, forward Alexis Johnson, forward Sky Thomas, guard Paige Shy and sophomore forward Mahogany Matthews.

With such a different team, the question of just how the team meshes its strengths is still up in the air, said Kemper. However, what he said he does know is that his team will “be ready to fight and play hard for Marshall.”

Between Nov. 5 and Dec. 2, Marshall will play its non-conference schedule with key matchups against Ohio University on Nov. 13 at Ohio, Bowling Green University on Dec. 7 at home and Rutgers on the road Dec. 15.

Then, to start off the new year, the Herd will open Conference USA play at Rice on Jan. 2.

The Marshall women’s basketball team will begin play for the 2019-2020 season on Tuesday, Nov. 5 at 6 p.m. against Kentucky Christian University.