Neuroscientist lectures on importance of inclusion on campus 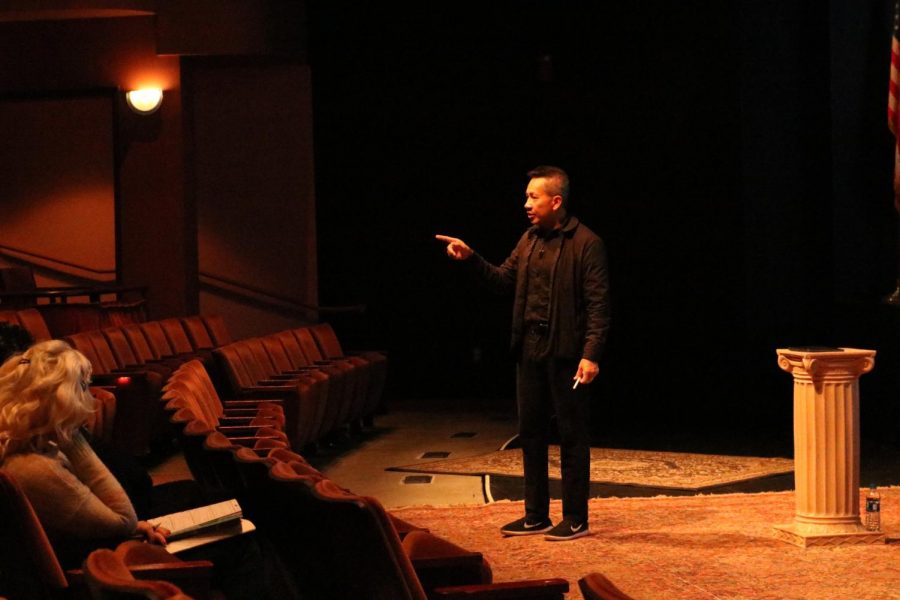 Steve Robbins addresses Marshall faculty members Tuesday at the Joan C. Edwards Playhouse during his lecture on the importance of inclusion on campus.

Robbins, who is also the founder of S.L. Robbins and Associates, a consulting firm on human behavior, spoke to university faculty members about how practicing inclusion could greatly impact everyone on campus.

“The human brain is optimized to perform at its best under two root conditions,” Robbins said. “Condition one, our brain wants to be around people, and condition two is that our brain also wants to be around people who care about them. The brain is hardwired to belong, and for no other reason, that’s why we should be addressing issues of inclusion.”

Robbins said he was born in Vietnam and immigrated to the United States with his mother in 1970 at the age of five.

“In coming to the United States, we had to leave a whole family behind, which was extremely difficult because in Vietnamese culture, family means everything,” Robbins said. “We flew into LAX, and as we got off the plane, people threw things at me and my mom. They spit on us as we walked by and yelled horrible words towards us. I didn’t understand English at the time, but I knew these were not pleasant words by the way people were yelling them.”

Robbins said he remembers the feeling of being treated like an outsider, confused as to why he and his mother were treated the way they were.

“We were these outsiders in these people’s minds,” Robbins said. “We were these immigrants who didn’t belong in their country, forgetting that this is a land of immigrants.”

After experiencing severe bullying and exclusion as a young boy in the U.S., Robbins said he was inspired to learn more about the human brain and how inclusion could greatly benefit human beings as a whole.

“If you don’t address the inclusion piece of the equation, then diversity is just optics,” Robbins said. “The root of every problem concerning diversity is insider versus outsider. If you start determining the insider and outsider, it’ll make the diversity conversation a lot easier. Why? Because everyone experiences both conditions. Everybody knows what it is like to be on both sides, which means we can be empathetic if we are motivated to be.”

In 2002, a group of UCLA neuroscientists conducted a study to find out what happens inside of a person’s brain when they are put in the position of an outsider. They conducted a test excluding an individual from a game with two other people and found that the same parts of the brain that light up when a person experiences physical pain light up when that person experiences exclusion.

“We are all aware of the saying, ‘sticks and stones may break my bones, but words will never hurt me.’ Well, this research and a lot of other research that followed says that this phrase is fundamentally false,” Robbins said. “I can hurt you deeply with words; in fact, I can make the case that I can hurt you more deeply for a longer period of time with words than through action. This is the social pain of bullying.”

The issue of making someone feel like an outsider occurs on college campuses as well, according to Robbins.

“The problem is that you have a bunch of classrooms, with a bunch of professors who do different things, and students get a little mixed up,” Robbins said. “Imagine you’re a student and you walk into professor A’s classroom and they do things a certain way, then two hours later you go to professor B’s and they do things a different way. As a student, you’re all mixed up and don’t know what to do, and on top of all that, what if professors do things a certain way that makes you feel like you don’t belong? How does that affect a student?”

Humans are drawn to a sense of belonging, dating back to the beginning of human history, said Robbins.

Ending his lecture with a simple message for faculty and students on Marshall’s campus, Robbins asked those in attendance to practice inclusion in their daily lives.

“What I want you to practice is this: Be more mindful, be more observant of people in your midst, in the halls and campus, who may feel like outsiders,” Robbins said. “We often know who they are, we can look and see, be mindful of these people and care about them. Go up to them and tell them they are a part of your tribe, because that is what we are about at Marshall University.”