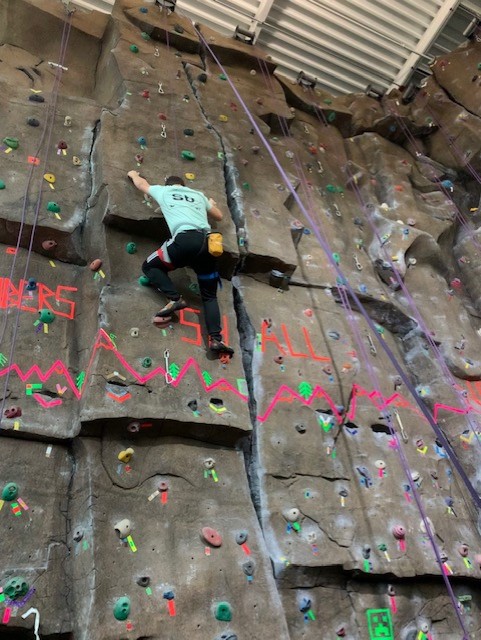 The rock wall at the Marshall University Recreation Center was blacked out and turned into a neon glow room for students to test their climbing skills Tuesday.

Marshall’s Rec Center organized the annual Blacklight Bash and had a great turnout, according to rock wall attendant Jacob Bryant.

“We had a lot of people back here. At one point, I would say there was around 30 people all in this one room,” Bryant said. “It got pretty hot in here.”

The rock wall attendants used neon tape to tape up different routes for students to take, and the rock wall room was completed with blacked out windows and a blacklight.

“We taped up easier routes rather than harder routes because we had a lot of new people that came to the event, and we wanted them to actually be able to climb something,” Bryant said. “We try to be super inclusive to everyone, no matter what experience level they have.”

The event was centered around gaining exposure for the rock wall, according to Bryant.

“Where the rock wall is located at the back of the Rec, a lot of people just don’t come back here because they don’t really have a reason to,” Bryant said. “We do the event to get people back here and kind of show off the rock wall and get more people familiar with it.”

Blake Lacy, a first-year athletic training major and climber who attended the event, said it was a great way to take a break from schoolwork and to hang out with friends.

“The best part was getting to climb with my friends and just being able to have fun with each other in a different atmosphere,” Lacy said.

Lacy said he is fairly new to the sport and has been climbing for about three months. He said he loves the challenge the sport gives him.

“It’s definitely a challenge, and it helps me to get out of my head and just be where I am,” Lacy said. “It’s a different type of sport, it’s not your traditional exercise.”

According to Bryant, who has been climbing for roughly two years, it is a very freeing sport and different than anything else.

“There could be one route, but 50 different ways to do it,” Bryant said. “I like being able to do things my way, or being able to change things up a little bit. If one route gets boring, you can do it a completely different way and it’s almost like a brand-new route.”

Climbing is also a way to exercise without really realizing that you are exercising, according to Lacy.

“It’s definitely a sport unlike any other,” Lacy said.

Julianna Everly can be contacted at [email protected]