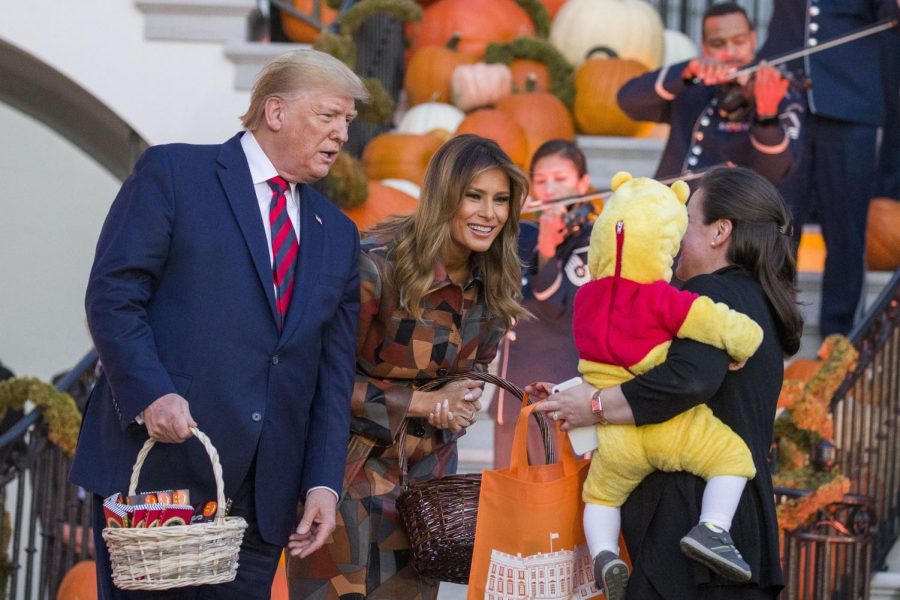 President Donald Trump and First Lady Melania Trump give candy to children during a Halloween trick-or-treat event on the South Lawn of the White House which is decorated for Halloween, Monday, Oct. 28, 2019, in Washington.

For decades, Halloween has been a festive holiday celebrated through trick-or-treating, costuming and decorating spooky, scary scenes of haunted horrors. This year, however, many Americans are finding themselves incapable of celebrating comfortably.

Surveying over 800 respondents in September, WalletHub concluded 85% of participants planned to reduce expenditures. The survey also revealed two in three participants think the American economy will only become even scarier and more unstable in the next year.

According to the survey, roughly 78 million Americans, or 31% of adults, would most likely willingly describe their own finances as “a horror show.”

Despite claims by President Donald Trump and other Republicans in Washington D.C. that the American economy is flourishing at historic heights, such dire realities about the economic wellbeing of average Americans will likely come as little or no surprise to working people across the country.

The most recent reports on the subject—including one by CareerBuilder in 2017 and one by Charles Schwab in 2019—reveal that somewhere between 60% and 80% of full-time workers in the U.S. live paycheck-to-paycheck, terrified primarily of costs of emergencies and medical bills.

Meanwhile, various statistics reveal the damning realities inspiring such fears: More than half a million Americans go bankrupt each year because of medical bills; More than 40,000 Americans die each year unable to afford health insurance; and only about 40% of the country could handle an unexpected $1,000 expense such as an emergency room visit.

Unsurprisingly, economic experts realize the risks associated with such a broken and rigged “house of cards” economy. A recent survey by the National Association for Business Economics revealed nearly three out of four economists say the American economy will plummet into recession by 2021.

As the Washington Post reported in August, “The report illustrate[s] that for many economists the question is not so much whether the U.S. economy will enter a recession but when.”

So, when President Trump and other Republicans claim responsibility for a growing American economy, what, exactly, are they referring to?

Last month, President Trump tweeted, “Some of the best economic numbers our country has ever experienced are happening right now,” and, believe it or not, while this statement is undoubtedly misleading, it is not entirely untrue.

The problem with conservative claims about a flourishing American economy is not necessarily the accuracy of their numbers, but rather the relevancy.

These claims often rely on stats relating to annual GDP growth in the U.S., but such is not remotely reflective of the wellbeing of average Americans, and politicians and representatives have a responsibility to understand this simple fact.

Following this metaphor, the U.S. economy is moving at an acceptable pace, experiencing a 3.1% growth in GDP in the first quarter of 2019 and 2.1% in the second quarter. For comparison, in the second quarter of 2014, the U.S. economy under the Obama administration achieved a growth of 5.5%. The country’s GDP growth throughout other eras, including the 1950s and 1960s, has been even higher.

But while the “speed” of the U.S. economy may be reasonable, for working-class and middle-class citizens, its more impactful indicators are anything but. For most U.S. workers, wages have remained stagnant for decades.

A Washington Post fact check revealed last year that the Trump tax cuts, thus far a defining policy enactment of his presidency, serve primarily to lower taxes for the top 1% of income earners in the country, further exacerbating already-absurd American wealth inequality while raising taxes on working- and middle-class citizens.

“In 2027, 82.8% of the tax cuts will flow to the top 1%. The top quintile actually receives 107.3% of the tax changes— because taxes actually increase for the folks in the lowest, second-lowest and middle quintiles,” the fact check said.

Another metric touted by the Trump administration has been lowering unemployment rates during his presidency. Again, like most relatively effective propaganda, such claims are rooted only in vague, misleading realities.

While unemployment rates under Trump have recently hovered around 3-4%, similar to those experienced throughout the country in the late sixties, such statistics do not take into consideration a metric Trump himself often hounded President Obama—and rightfully so—for ignoring throughout Obama’s presidency.

Trump, throughout his own presidency, has switched to stating only the U-3 unemployment rate, which excludes underemployed and part-time workers unable to find sufficient work in a struggling economy. Tellingly, before his election, he and others constantly pointed out during the Obama years that the “real unemployment rate” is the U-6 rate, which includes more broadly representative factors.

The president’s hypocrisy here speaks volumes. Despite a U-3 unemployment rate of just 3.3% last month, the U-6 rate, a much more accurate measure of nationwide unemployment and underemployment, remained nearly double, at 6.5%.

Don’t be fooled: American workers have been struggling for decades, living paycheck-to-paycheck without experiencing significant wage increases, under corrupt, corporate, establishment Republican and Democratic administrations alike, and the Trump presidency has emphatically proven to be a mere continuation rather than an exception.

If President Trump has truly “drained the swamp” of elitist American corruption as he so promised throughout his historic 2016 campaign, one must assume he has also syphoned the corporatist cronies of his administration and their constant faux-populist propaganda from the rotten remains.