Special Teams lifts the Herd for 5th win of the season 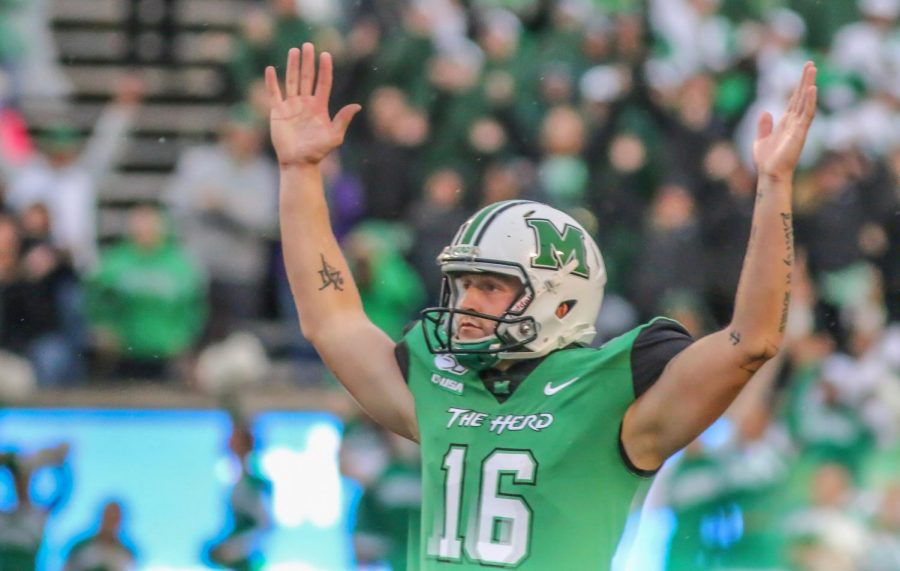 Justin Rohrwasser after he nailed the game winning field goal.

“I am really proud of my players, I am proud of the way they played,” Head Coach Doc Holliday said. “We took care of the ball and were two-for-two out of the redzone and that was huge.”

The Herd jumped on the Hilltoppers early when redshirt sophomore Isaiah Green found redshirt senior Armani Levias in the back of the endzone for a 25-yard touchdown pass. Less than four minutes later into the first quarter, Green put the Herd up 14-0 when he found grass and ran it in from 4-yards out.

Rohrwasser drilled a 46-yard field goal to start the second quarter to give Marshall an early 17-0 lead. WKU finally got points up late in the second quarter when redshirt junior Gaej Walker ran the ball 33 yards for a Hilltopper touchdown.

Rohrwasser kicked in two more field goals from 31 and 43 yards to bring Marshall up 23-7 late in the third quarter. WKU started to climb back into the game when graduate Ty Storey ran the ball in from a yard out. The Hilltoppers’ freshman kicker Cory Munson sent a bullet through the uprights when he nailed a 27-yard field goal to make Marshall lead only 23-16 in the fourth quarter.

WKU tied the game up late in the fourth when Walker ran the ball 16 yards into the endzone to tie the game 23-23 with just minutes remaining. Marshall was able to bring the ball into WKU territory with just six seconds left, which let Rohrwasser nail the game winning field goal as time expired.

“Every bus ride since middle school and high school, it’s something you dream about,” Rohrwasser said. “I am lucky and happy the coaches had faith in me.”

Marshall improves its record to (5-3) on the season and (3-1) in Conference USA play. The Herd will be traveling to Rice next Saturday to take on the Owls.